A new scale Hurrah! It's not like I've already got a good collection of 28mm and a somewhat smaller one of 15mm for WW2. No, I've had to branch out into 20mm as well it seems.

I actually blame this latest fools errant on friend Curt of Analogue Hobbies fame, who despite my strongest objections, didn't stop trying to lure me into the abyss. What kind of person must he be to do something like this to one of his weaker minded fellow men I ask you? Quite a devilish one, I tell you!
Anyway, years later and quite a few bucks poorer, here I am with not only a readily playable force of 28mm Soviets for Chain of Command, but a fledgling one in 20mm as well. And all that while I actually don't really fancy gaming the Eastern Front. 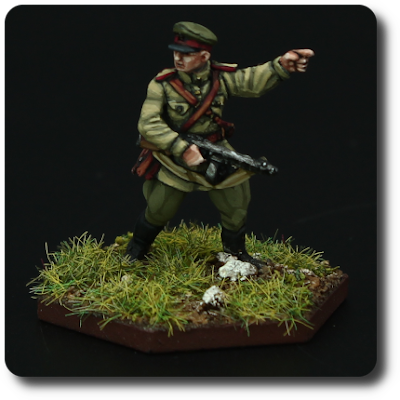 Figures are the excellent AB Figures by Tony Barton as I decided if I was to embark on this daft adventure I could just as well do it in style. Painting wise I settled on using only base colour and two highlights as compared to my usual way of a quadrillion layers. An interesting change to be honest and it also speeded up my usually glacial painting speed no end. 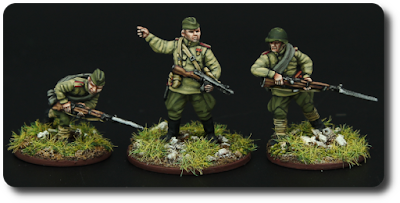 You probably won't be surprised to hear reinforcements are already on their way, but obviously got stuck in the post-Brexit traffic jam debacle... 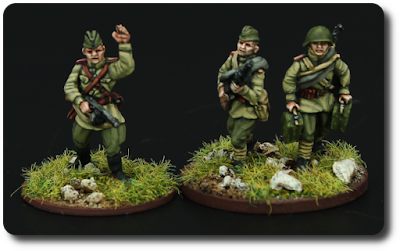 That's it for today. Hope you're all well and till next time!

Wrapping up the Airborne project

Yet another submission to the AHPC:
I'm sure many of you know the feeling. In the one moment you're happily beavering away on a project when all of a sudden you feel it has run its course. For the moment at least. Now that's exactly what happened here. I got a few more British Airborne for Operation Market Garden done and that'll be it for now. I might get my acts together and add a few things to round out the opposing SS force... or I might not. We'll see. 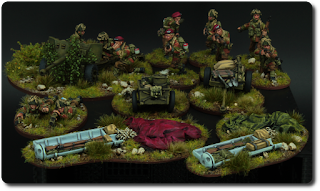 First off a 6pdr AT-gun with separate Junior Leader. It's really a shame most manufacturers don't give you the full complement for each gun, or at least offer generic figures lugging crates and stuff about to round out the numbers. The 6 Pounder usually had a crew of 6 and thus I added a little dice well to the base to keep track in games of Chain of Command. I might still do a little removable filler to make it less obvious when sat in the cabinet 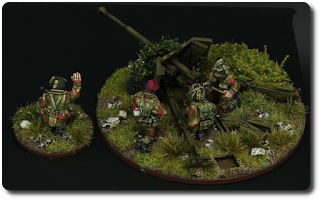 Next are the Jump Off Points to go with the force. I like doing specific JOP's for each of my Chain of Command forces and try to make them fit in with the theme of the force. 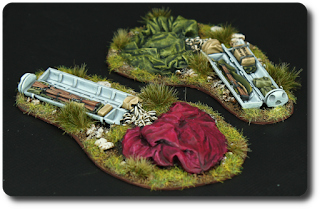 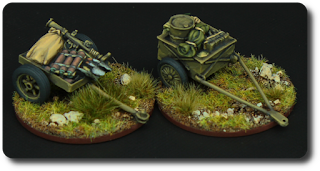 These are followed by a second PIAT team to add yet a little more AT capability. 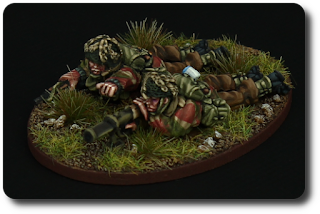 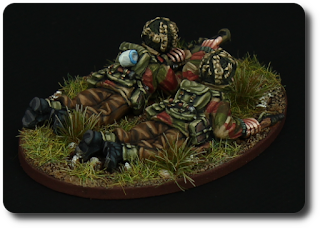 I was right in the middle of painting another support squad when I decided I was done with that project. So these six fellas are on their own for the moment. Maybe acting as additional crew for guns. 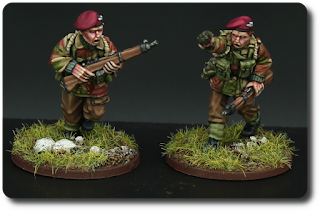 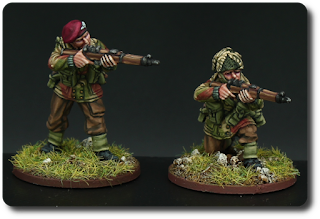 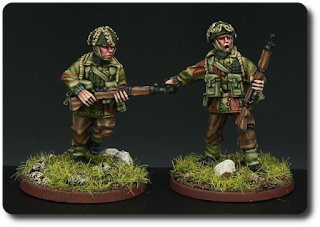 Points wise I'll claim 8 points for the Jump Off Points reasoning them not really being terrain but more akin to a (large) 6mm vehicle. Added to that a gun at 10 points, 2 prone figures at 5 points and 10 more or less upright figures at 50 points.

Making for a grand total of 73 points.
13 comments:

Yet again another entry in the Annual Analogue Hobbies Painting Challenge. At the moment I'm experiencing a rather uncommon quiet time at work meaning I find myself with more time at my hands to pursue the hobby. 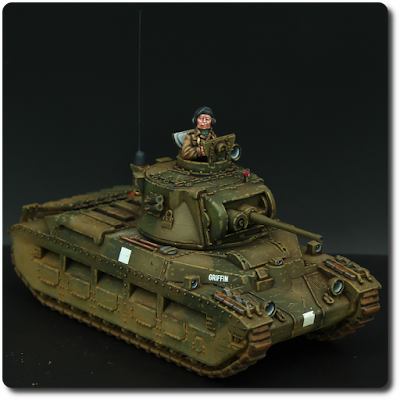 I meant to get round to paint the plastic Matilda II's by Warlord Games for a while now. In actual fact I built it a while ago already but didn't get round to paint it as I wasn't able to get my hands on the appropriate colours first. Help finally came in the guise of the AK Real Colour range. They're easy to use with the airbrush and allegedly give you the exact colours as used on the actual vehicles. Well, if the latter is true I actually don't know but it looks good enough in my opinion. Unfortunately the range doesn't yet include the Dark Green No. 4 as used from mid 1939. It was to be painted on top of the base colour of Khaki Green No. 3 which was used from February 1939 onwards.
So the colour I used probably was a little too dark but the contrast works rather well I think. 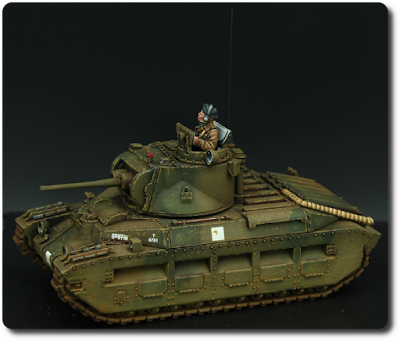 About the plastic kit itself I'm in two minds really. On the one hand it's nice to finally get some more Early War vehicles in plastic, especially not as Shitaleri kit, but unfortunately the instructions provided are a little ambiguous at some places. It didn't help I managed to glue on the wrong set of tracks for the theater in question. That said I prefer the look of the lowered suspension anyway, so all in all not too much of a tragedy. The decal set provided with the kit doesn't compare well with those provided by Rubicon Models. It has only a few options and you're not able to reproduce a specific tank. So for example the war department numbers don't fit with the tank names. Neither in style nor the numbers themselves actually. So the tank Griffin, the name I settled on for my tank in the end, should have the number T6753 but the only number which would fit at least style wise was the T6761 which was apparently not a number used for Matildas in France.
While this probably is bordering on button counting I find it still annoying as it would have been just a minor thing for Warlord to provide the accurate war department numbers. 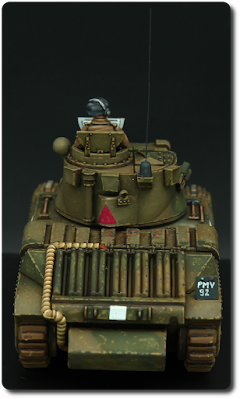 Thanks for viewing, stay safe and hopefully till next time! 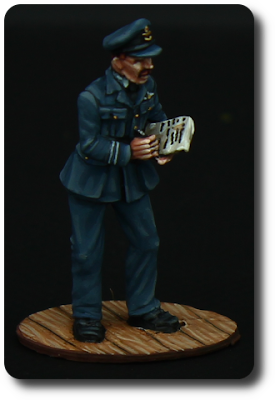 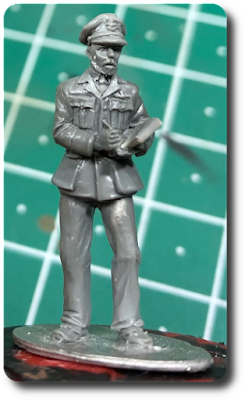 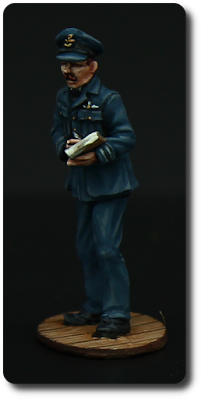 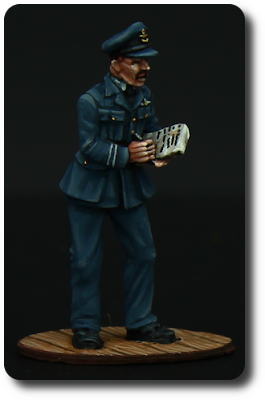 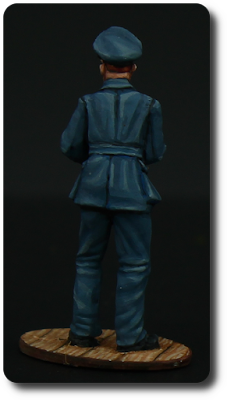 Points wise this submission is 20 points for the chamber plus another 4 points for a single 20mm figure = 24 points
11 comments:

The Annual Analogue Hobbies Painting Challenge is in full swing, so here's my fourth submission for those of you who don't follow our progress there:
As we step into the chamber, portentously named Pit of the Pendulum, we stop dead in our tracks. "What's that? That's no bloody pendulum!" we mutter to ourselves as from out of the dark comes a trio of men in camouflage smocks. Their faces, half hidden beneath their helmets, curiously distorted by the dim flicker of a flame not bigger than a candle. It's only when they stop just a few feet away that we realize with horror it's no candle but the pilot flame of a flame thrower... 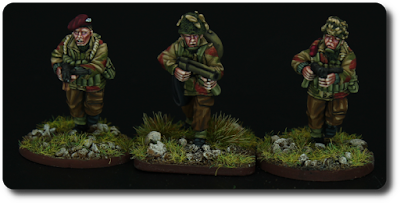 Having painted Scope for my last entry for AHPC XI I thought I might just as well crack on and finish the remaining five Chancers. So after almost five years they're finally reunited.