Reinforcements for the 20mm Soviets project

So here we are, yet another challenge has drawn to an (untimely) close. As others I haven't painted nearly as much as I planned for but I definitely painted more than I had hoped for. With this final submission I will have a good few support selections for my 20mm Soviets in games of Chain of Command. A force I hadn't even planned to paint this year at all. Well laid plans and so on...So, as time is short today let's move on to the figures, shall we? First off is another basic Soviet rifle squad. Not really much to prattle on about. As most figures in this submission they're from the wonderful range of 20mm WW2 miniatures by AB Figures.

Next in line we have a 45mm AT gun. The gun itself as well as two of the crew are from Zvezda. Surprisingly nice hard plastic figures that mix well with AB. I would have preferred the wheels to be the later solid wheels instead of the earlier spoked wheels though. Would have saved me a lot of pain painting on those bloody spokes. 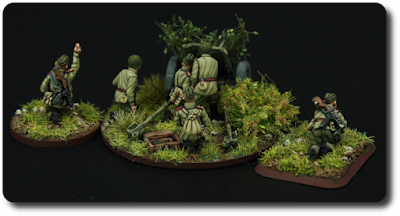 Then we have a Commissar which can and will double up as another regular Senior Leader in games of Chain of Command. He's accompanied by a few SMG gunners I had knocking about. Don't know what to use them for yet but I guess they might come in handy at some point... maybe.

Also on the menu tonight is a Soviet Forward Observation Officer, short FOO, together with his radio man. I very much doubt a Soviet FOO for a 80mm mortar battery had a wireless set but I think it looks cool, so who cares? 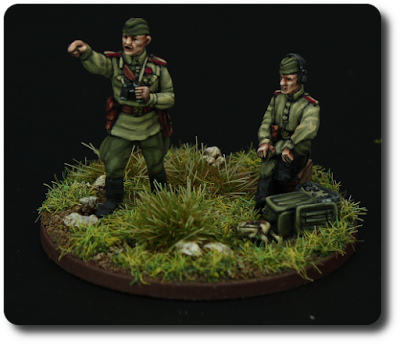 Then we have a PTRD AT rifle team. Not much use in its intended role later in the war but should be good enough to take on enemy armoured cars and the like. 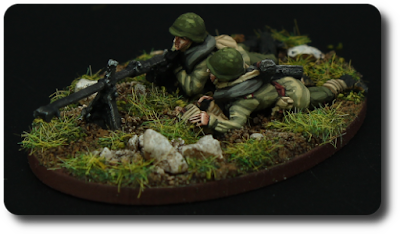 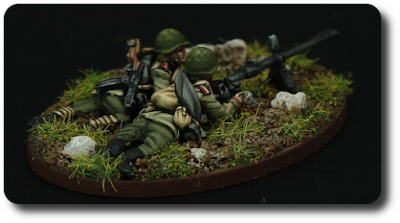 Also on offer is a Maxim machine gun. A sturdy little piece of kit and just the ticket when you need the Germans to keep their bloody heads down.

And finally we have the crew for a ZIS 3 AT gun but without the gun I'm afraid. The gun together with three T-34's is still sitting on my painting table half finished. But with me taking part in an online-gaming event today there's no chance of me actually finishing those in time.

Thanks for viewing and till next time!