Ok, it's been quite silent round here for longer than I had anticipated.
I was renovating my hobby room and this proofed more of a challenge than I had expected. Especially as missus Moiterei had the brilliant idea to do the sleeping room as well when we're at work already.
But I'm proud to announce this task is done and I'm up for many new and old projects.

First of Chris from Bunker Hill Blog asked me if I had some cattle for our next games of Dux Britanniarum.
As he's always putting that much effort in preparing the table for our games I was happy to answer the call and paint up some cattle from the 1:48 Farm animals set by Pegasus Hobbies. 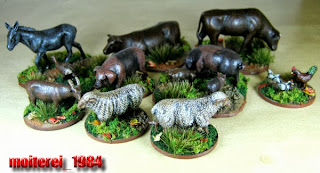 After Chris and I still are continuing our "Dux Britanniarum" Campaign we had another game last week.
(Pics will follow shortly...I hope^^)
To anticipate some events a bit, during the battle I lost my two nobles and the champion. The champion was in fact killed during the pre-game phase as Christophers champion 'Wolfhead' challenged 'Gildas' and as a result of a fierce fight he killed him... well, 'Gildas' didn't even deal a scratch to 'Wolfhead' but he was courageous till the end.

During the following battle my first noble 'Eckfrith ap Ynys' called the Bastard and his compagnion 'Eliffer' also known as 'Dungbreath' were killed also. This left my leader facing the saxon onslaught on his own and so he decided to leave the field of dishonour to fight amother day.

This result left me with a tough decision. Wether to play on with my 'killed' nobles or follow the spirit of a campaign and recruit (read paint) new ones.
As I grew somewhat acusomized to 'Dungbreath' I decided to let him life. I think he pretended beeing killed during some hand to hand combat and crushed down between the actually killed. Later the night he shambled into the british camp telling a crude story of a severe blow to the head (a minor scratch was visible at his forehead) and how he escaped the looting saxons. So he was promoted to first noble.

Now what happened to the 'Gildas' the champion and 'Eliffer' you may ask? Well, I'm pretty sure Christophers champion 'Wolfhead' knows his job so 'Gildas' remnants were gathered after the battle and burned to enable his soul to join his ancestors. Despite nothing of 'Eliffer' was ever found he is to be believed beeing killed just as he saved 'Theodosius's' (My Leader) life. It's perfectly possible that the saxons, despite beeing a bunch of dirty dogs, acknowledged his bravery and (after having stripped his corpse from everything valuable) burried him.

So I urgently needed a new champion and a new second noble. And here they are!

May I introduce to you Flavius Pulcher (Second Noble) and Turpiculus Ater (Champion):

This week I've been quite productive, finishing almost 2 miniatures a day. I'm still working on my Late War German Luftwaffenfelddivision but the end is within reach. After having finished this batch there are just 8 figures still to do.
At least when I stick to Bolt Action, as after having bought the "Chain of Command" by TooFatLardies this week, I realised there are too many automatic weapons in my Platoon. So if I want to expand to CoC I'll have to paint up another batch of 12 Riflemen... though these are things I give a thought sometime in the future. 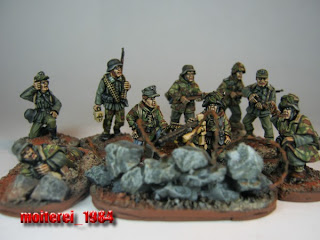