Still in full swing I decided to take advantage of my enthusiasm and do another Colour Guide. After a popular vote with overwhelming majority (2 vs. 0) for a Colour Guide on Soviet Infantry that's what I set out to do. You see? Voting Does make a difference ;-)

Luckily I had still some assembled Warlord Plastic Soviets lying around. So the perfect excuse to finally get that Tank Rider Platoon finished.


My painting style is based on the so-called Triad-System or Foundry System in which you use a Shade as the darkest colour. Then you paint over it using what is called a Base Colour (in general the actual colour you want to achieve for the piece you're just painting) leaving the Shade show only in the folds and recesses, followed by a Highlight on the points which will catch the most light. However, I'm using intermediate steps to make the transitions between the different colours much smoother.
Thus typically the steps I use would look somewhat like:


Note: I haven't documented every single step for this Colour Guide, so you might want to refer to some of the guides I wrote earlier. To do so just go to the top of the page where you'll find a link to a page containing direct links to all the Colour Guides I wrote to date.
Step 1: Brown Uniform
I might do another Colour Guide on green-ish uniforms later but my existing force sports brown, so that's what I went for. 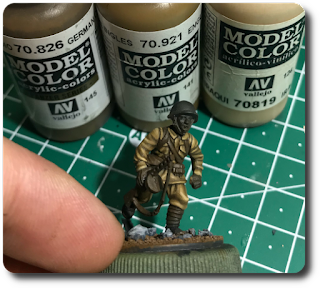 Step 2: Rolled Greatcoat
Yes, that's right. It's no blanket, it's a rolled greatcoat some of the figures are wearing. It was used as a blanket as well, though. Allegedly it was worn this way to give added protection in a bayonet fight. Don't know if that's true but it definitely was a custom introduced well before WW2.
When looking on the Internet for Soviet WW2 Uniforms you often happen across Reenactors wearing brown greatcoats. These were only introduced in the Cold War era but are readily available and dirt cheap, so that's what many seem to go for. Some of the Soviets I painted earlier sport brown greatcoat rolls, so you see a little research before delving into a project would sometimes help.
So, the "correct" colour for a Soviet WW2 era greatcoat would be grey. Admittedly a brownish grey, but still grey. 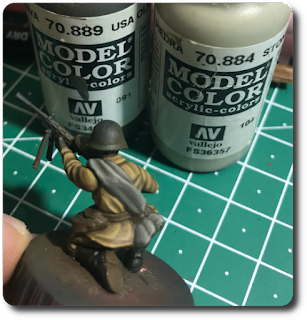 Step 3: Green Helmets
Like with many other armies Soviet helmets came in a variety of different shades. Personally I think a strong green works well with the brown uniform as it adds some much needed contrast. 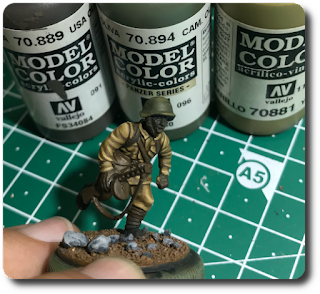 Step 4: Webbing pouches, rifle slings and Putties
Putties and pouches also came in a myriad of different hues of greens and browns. I went for a very light, almost white canvas for the pouches to represent undyed linen and a marginally darker colour for the putties. 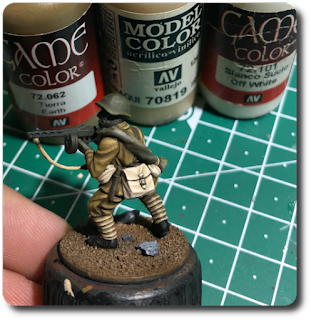 Step 5: Brown leather equipment
Soviet leather equipment was generally not blackened. So I went with a reddish brown to represent slightly aged natural leather.
For a change I used the colurs straight out of the pot, so no mixing required at all. 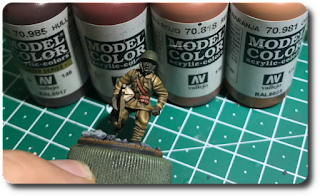 Step 6: Wooden rifle stocks
When I'm after a more aged look for treated wood I use a darker triad than I did in my Guide on British Paratroopers. 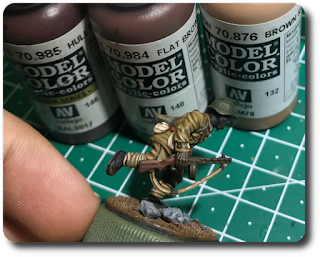 As the above pictures were all taking using the camera of my cellphone I thought it'd do the paint jobs more justice to include a picture of a squad I painted earlier. Interesting to see how much difference proper lighting and a good camera make.