Finally I've pulled the finger out and got going on the Paratroopers for my French Indochina war project in Greyscale. To be honest it really proofed to be a quite daunting and especially different task to try to emulate camo patterns in Greyscale compared to the rather straight forward Viet Minh. 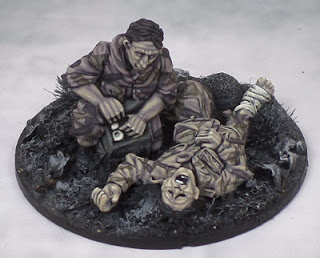 I've been meaning to load these pics up for a while now but sadly my Cam seems to have lost some of the photos (together with some of other on going projects) and I only now came round to take new ones. So here it is for you to enjoy, the German 8cm Granatwerfer 34 (kurz). Miniatures and decals by Warlord Games again. 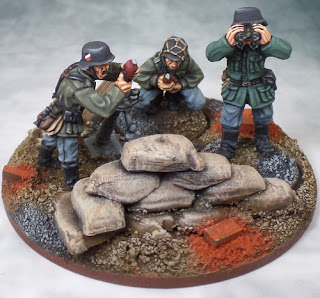 The 8cm Granatwerfer 34 was the standard German heavy mortar of WW2. Its developement began in 1932 at the Rheinmetall company in Düsseldorf and was introduced into the Wehrmacht arsenal in 1934. From 1940 on the 'kurze 8cm Granatwerfer 42' was developed and put into production in 1941 as a replacement for the 5cm Granatwerfer 36. Weighing about half as much as the 'lange' (long) version and hence beeing more mobile it was primarily meant to be used by the Fallschirmjäger Divisions but was adopted later by the Wehrmacht as well.