Last week, ok well it's been 9 days since, I had a very enjoyable game of 'Dux Britanniarum' at Axebreakers mansion. Chris himself has written some words about the game.
As he already did the job of explaining the idea behind the game (and I go pretty much along with him) you should really head over to his blog.


Cyrric the Flatulent king of a small province in the outermost southwest of Britannia called Noviomagus Regnorum felt the cold creeping into his old bones as he was starring into the chilly spring night. He knew they were out there. Somewhere in the dark these vain saxon dogs were about to raid his kingdom.
After a rainy summer followed by poor harvest before a hard winter he knew his little realm was in no way prepared to meet the saxon threat. Just as he was about to leave the walls of his little stronghold he saw the luminous glare of burning huts in the otherwise deep black sky.

'Get ready you bunch of lazy bastards!' Theodosius Magnus bellowed at a group of drowsy figures.
This was one of these moments he asked himself why the hell he was here in this god forsaken part of the world.
Born in Rome as bastard of a high ranking officer in the field legions and a young slavegirl, he was part of the last Legions in Britannia as the Emperor decided to withdraw his troops to the continent.

Just hours before he had to embark, Cyrric this drunken piece of sheepdung, now calling himself king of Noviomagus Regnorum, asked him to stay and become leader of his despicable bodyguard. If it wasn't for this little girl having made eyes at him he would have refused the offer.

Now he was in the mud of a true british spring, his girl already in the hands of some other bugger, leading some dirty skits of soldiers to fight a band of marauding saxons. He knew he was already late as he had seen the fires of burning huts in the distance. Now it was all about swiftness to catch these saxons before they were to recover into the safety of the lost lands...

We played the first scenario 'Raiding a church' where I had to prevent Chris's Saxons from plundering the church and take the monk as hostage. The fight would be over when the troops taking the monk with them leave the table.

The real battle began after some rounds of aggressive maneuvering. As Chris's saxons had a headstart of three full movements I had to be quick to get my troops on the board and ready for action. Unfortunately most of the time my troops were standing in the way of each other due to my ignorance of the movement and formation rules.

First troops in contact with enemy warriors were a single group of levies... 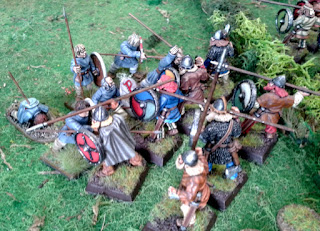 After having suffered under the heat for several days now, yesterday was the time to rock the brush again.
I finally finished the mortar team from Artizan Designs to fit my other stuff for 'Operation Squad'. 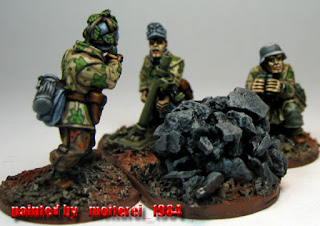 As I had a very enjoyable game of Dux Britanniarum (AAR to follow) on saturday at Axebreakers mansion I asserted the urgent need for sabot bases.

Therefore I had a look at the different manufacturers of lasercut mdf bases. Some do quite usefull stuff but none really had exactly what I wanted. I need bases for 6 square and at least one round base as my Warlord and the Nobles are based on  25mm round washers while for the rank and file I used 20mm squarebases. So I decided to do them on my own.

To do your own sabot bases you'll need:

Step 1:
First cut out a piece of polystyrol sized 120mm x 60mm using your hobbyknife. Afterwards you should mark the positions for the bases.

As summer finally arrived in Germany too, it became a bit quiet around here. As my men cave (like the rest of my apartment) is directly under the roof I wasn't really in a mood to paint some lead.
As I've been sick over the last few days I decided to do it anyway.
Therefore I finished the three archers needed for our first game of Dux Britanniarum on saturday at Axebreakers.