I ain't been lazy Mum!

This week I didn't realy paint up some project related stuff as I (once again :-/) lost a bit focus.
So I ended up painting two "Imperial Arquebusiers" by Freebooters Miniatures a nice & little german company. The figures belong to the "Freebooters Fate" Fantasy-Tabletop. Don't know if it's that well known outside Germany though here it has a ever growing fanbase.
The figures themselves are simply great. The casting is absolutely crisp, almost no mould lines, though therefore an almost unbelievable richness of detail. At least way more detailed as a common painter as me could ever paint^^.
I painted two other Fantasy Pirates too but I just don't know the manufacturer as these were bought by my wife in one of these '...these are soooo cute' moods. IIRC the figures belong to a discontinued range. They are nice sculpts too, though they are not as detailed as the Freeboorers ones.

At first a pic of all of them: 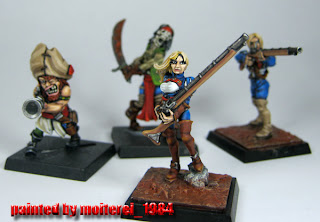 These are ready since sunday, though I haven't had the time to take pictures of them. Originally intended for 'Secrets of the third Reich' or 'Rules of Engagement' these were sitting in my drawer unpainted for quite some time. I never was quite happy with the old sculpts. Nevertheless I decided to paint them up in order to use them for 'Operation Squad'.
I was totaly surprised by how they act painted. Especially the ZIS-3 Crew turned out quite well (at least in my oppinion^^).

Unfortunately my cam seems to get older as it's not able to catch the colours right. The ZIS-3 Crew comes closest to the actual colours. Have to get a new one soon, I think.

The whole bunch consisting of ZIS-3 with crew, 82mm mortar and Maxim MMG. All figures from the Bolt Action range by Warlord Games. 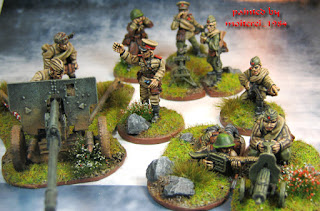 As I urgently :-) had to buy the plastic Russians from Warlord Games at Tactica I  decided to start a soviet rifle Squad for Operation Squad.
First I was not too keen on the box as I have the German plastic Infantry too and I don't like it. The arms are too slim, the weapons too tiny and the bodys too clumsy.

So I was realy surprised with the new Russians. The weapons seem to have the correct size (at least they don't look like toys), the arms are well proportioned and the casting is crisp.
Painting these guys was sheer fun.

Ok, let's start with the pictures:

First the 500pts. Squad as a whole