This weekend Mike (http://dreispitz.blogspot.de), Chris (http://christopher-bunkerhill.blogspot.de/), Franz (Sorry, no Blog^^) and me made a trip to the Tactica 2013 in Hamburg.
The weekend was great and we had a lot of fun.
We met a lot of nice people and the atmosphere was very relaxed.

Beside the traders (where I almost not only spent all my money but my soul^^) there were lots of great looking tables. Unfortunately because of the overflow of impressions I didn't manage to take pictures of all the tables though all of them would have earned it.
And for those I photographed I don't always remember who made them :-)

So now on to the pictures!

First of all the amazing "Adventures in Bruegelburg" table using the Bruegelburg Miniatures Range by Lead Adventure Miniatures. 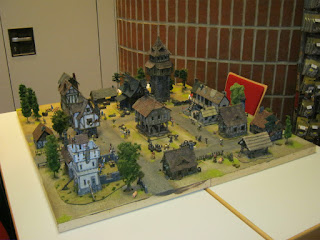 These days I finished the last three mounted Palatinae/ Advocati and now I'am finally done with my Late Roman Warband. Unfortunately I've forgotten to take pictures of the last group of Comitatenses I completed last week.
I have to admit it was hard to stay focused especially in the last few weeks particularly as I normaly am some kind of project hopper.
I don't think this project is realy finished for long but it feels great to say so.
As I started the warband I never would have believed that I'll need four months to get 54 figures done but better late than never.

At first a groupshot of warband in all its pride: 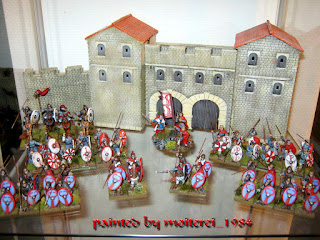 If I'll have enough sparetime after our trip to Tactica this weekend I`ll try to get some better pictures done.

Fall of the western Empire 10: Comitatenses!

Yesterday I finished the first eight Comitatenses for my Warband. They were sitting on my shelf almost finished for some days now as I was to lazy to give them the final varnish and do the basing.
Anyway... 5pts. ready two more to go. 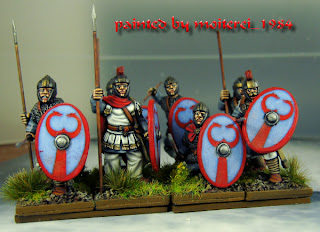