The Great War Project #3: Not home before the leaves fall...

A flooded Amazon of steel flowed roaring, immensely fast, over our heads and the machine gun bullets made a pattern of sharper purpose and maniac language against that diluvian rush. Flaring lights, small ones, great ones, flew up and went spinning sideways in the cloud of night; one's eyes seemed not quick enough; one heard nothing from one's shouting neighbour.

Almost finished standing on my workbench were two German heavy weapon teams. Today I did the last touch ups on the bases and here they are: 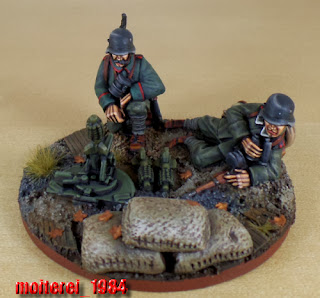 Impressions: A game of Bolt Action 'Watch on the Rhine'

Saturday last week saw a game of Bolt Action at Axebreakers mansion. Chris' superbly painted 101 Airborne saw action against my Luftwaffenfelddivision.
We didn't field any armour as we wanted to get into the game without too much special rules as it was only my 3rd and Chris' first game. As always my dice rolling proofed to be sub-par and I lost half my force before inflicting the first casualty on the Airborne.

'Take cover!' Too late: I fell on one knee on the ground. A sudden shock went through my left arm. It's behind me, bleeding profusely. I want to straighten it: I cannot. I want to get up: I cannot. I look at my arm as it shudders with the shock of a second bullet, and the blood pours from a second hole. My knees are stuck to the ground as if my body was made out of lead, my head bowed. Before my eyes a scrap of material jerks, the dull thud of a third bullet. Dully, I see the deep furrow of red flesh on my left breast near the armpit. I had to get up, drag myself out of sight. I didn't lose consciousness; my breathing sounded strange, gasping, quick and shallow.
The treetops swirl across a dizzying sky.

Lieutnant Maurice Genevoix, 106th Infantry Regiment during the fight in the St. Mihiel Salient.
Taken from 'The Great War: 1914-1918' by Peter Hart.

Yesterday I finished the first casualty markers for my Great War project. As strange as it sounds I had a great time painting the German casualties from Great War Miniatures. They're full of details. I think I'll need another pack to make some more. Unfortunately, as for any other miniatures range out there, there are much too few casualty miniatures out there.

The Great War Project #1: Over the top!

"The lamps are going out all over Europe, we shall not see them lit again in our life-time"
Sir Edward Grey August 3rd 1914

I know I'm a bit late for remembrance day (not beeing celebrated over here in Germany anyway) but painting and especially basing took longer than anticipated.

This small Vignette (Pinmarker or similiar) of a fallen German soldier of the later period of the Great War is intended to be the start of my next big project. Gaming the Great War in 28mm. 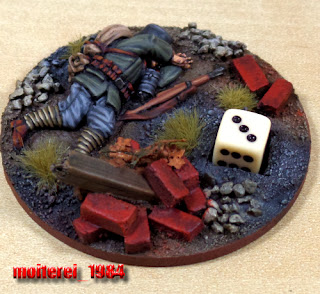 I don't normally post about things not related to wargaming in any form. This special Kickstarter really gripped me by the heart though:

from the Kickstarter:
'Portraits that reflect on war's consequences; a photo book about the German army in northern Afghanistan.

I started this project four years ago and am thrilled to have the opportunity to present it at the Sepulkralmuseum in the Spring of 2014.
Since the exhibition is only going to be on display for a few months, I feel it important to create something more enduring.
A book can deepen the story when paired with an exhibition, and having lived with the layouts I see a new story unfolding every time I flip through. There will be many more images than in the exhibition, and the book will allow for a more in-depth storytelling flow.
It has been an enriching and rewarding experience to build this book, and I am looking for your help now to turn this project into something that can be shared in a lasting way. 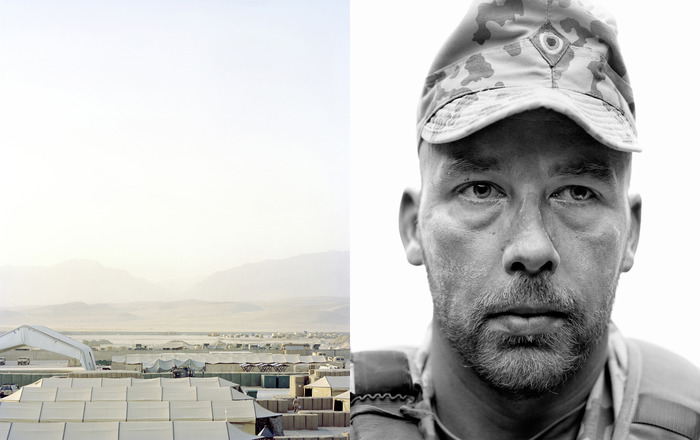 Acceptance for service in the Bundeswehr leaves much to be desired over here in Germany. This unfortunately includes respect for those beeing killed, injured or traumatized during their service. Contrary to the U.S.or Great Britain e.g. where you can speak proudly about your friend or brother serving for his fatherland, there's even almost no sympathy for those left at home in constant fear for their loved ones. Therefore I think it's of great importance to bring the stories of these brave men and women to public. Maybe this project helps to ease the tensions between us Germans and our armed forces.
As I know my brother will leave for duty in Afghanistan some time next year it's a special personal interest to me, too. Therefore I'm happy to participate and wish Jens Umbach good luck with the project.

While lots of you fellow Bloggers probably enjoy a day at Crisis in Antwerp I finished my Luftwaffenfelddivision for 'Bolt Action'. For now my last addition to the force is the Volkswagen Typ 82 or better known as Kübelwagen. 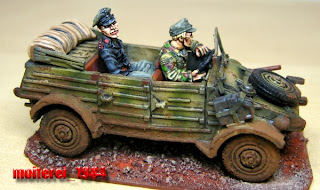