I was eyeing the plastic Panzer 38(t) from Warlord Games for a good while now, but as I currently wasn't into Early War WW2 I saw no imminent need and thus was in no hurry to get me one.
Well, this immediately changed with the release of the Blitzkrieg 1940 supplement for Chain of Command by TooFatLardies. It's not only crammed full to the brim with army lists for the six nations involved in Fall Gelb and Fall Rot along with rules amandments for even more period flavour, but also contains five new scenarios to give you even more Blitzkrieg for your bug. Well, you see... I'm quite impressed with that latest offering from the Lardies. 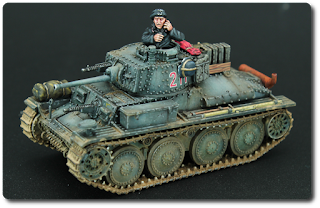 Well, let's talk Italian for a change. Over the last months I've been painting away on a small Italian unit for fellow Blogger Pat, well known through his blog -Wargaming with Silver Whistle- and Author of the rather excellent "Setting the Scene: Winter Wargaming".
Right now he's working on a second book focusing on the Mediterranean. I've painted a few figures previously for him which featured in his first book and as he asked me if I'd like to paint something for his upcoming book I took the chance to help the Regio Esercito Italiano to "their place in the sun". 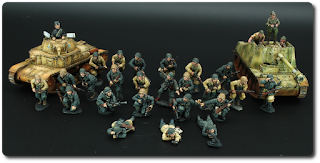