Today my second entry for the 6th incarnation of the Analogie Hobbies Painting Challenge.

Finally the kitchen is completed (well, almost... you know how this works) and I'm back on the brushes. So this week sees me submitting a few American Airborne in winter clothing for use with the Battlegroup set of WW2 rules. I'm planing on using them for the Battle of the Bulge and maybe Hürtgen Forest using the lists from Operation Overlord. Iron Fist are to release a dedicated book (softcover) for Battle of the Bulge sometime soonish but as of now the lists will be taken from Overlord anyway.

The miniatures and tanks are all from Battlefront Miniatures. While some of them are nice or OK sculpts, only suffering from bad casting, others are absolutely awful. The six Sherman M4A4's are from the original 'Open Fire' starter set and some of the worst plastic tanks I had the displeasure to deal with to date. To make them look a little less like ugly toys I added some stowage from Battlefront. The platoon leaders got reinforced armour in form of sandbags to the sides. Unfortunately I didn't have any US markings in 15mm at home so only the mandatory stars (taken from 28mm decal sheets) were added. 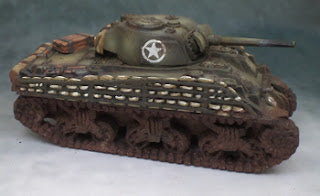 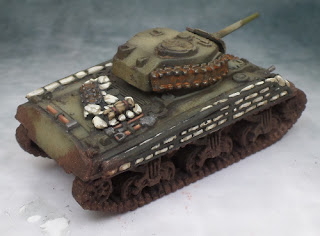 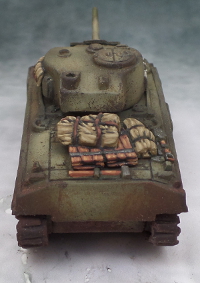 They were painted using the US Armor Camouflage set from Ammo of MIG Jimenez. As I quite liked how they came out I decided to not whitewash them but in hindsight I should have done that little extra step. Originally the tracks were intended to look muddy but as so often with pigments the results were quite different from what I had intended. For some reason the pigments dried out whiteish and I had to go over them with several layers of brown wash. Thus ruining the wet/ muddy look completely. 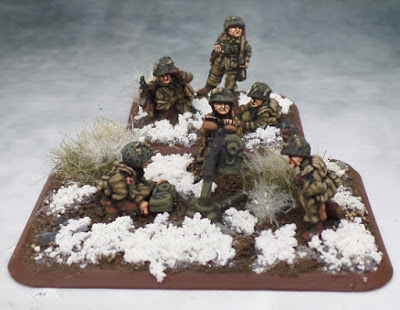 The crew for the .50 cal AA HMG were probably the worst miniatures ever. Despite having a set of three and taking only the best figures, they were just rubbish. Almost no detail, lots of flash and badly cast. Especially for the price BF are asking for their offerings, it feels like robbery to get such bad castings.

Overall I really enjoyed painting in a smaller scale than usual and am quite happy with how these came out. I still have to adapt my painting to 15mm but as I'm slowly running out of storage space, and really like how fast one can build a sizable force, I'll probably switch the most part of my painting to this scale.

Together with miniatures I painted earlier that gives me a well sized starting force of three not fully equipped platoons for Battlegroup. I still have/ want to bolster it out with some more stuff like trucks, halftracks, jeeps and scout vehicles. First though, I'll probably start on the Germans in order to get in a game some time soon.


To conclude this rather lengthy post a pic of one of two AT-guns and its support base, I painted up before the challenge: 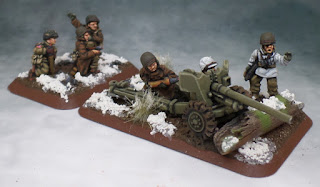 I hope you enjoyed and thanks for stopping by.
15 comments:

I had a late start into the challenge this year but last week saw me finally entering the roster of the VI Analogue Hobbies Painting Challenge. Right now the second of the 'Theme Bonus Rounds' is underway and if you want to treat you to some mighty fine and inspiring brush work you should make sure to head over and leave your vote.


Finaly I'm able to submit my very first entry to this years challenge. May I present to you my latest project,  a terrain build in 1/1 scale: 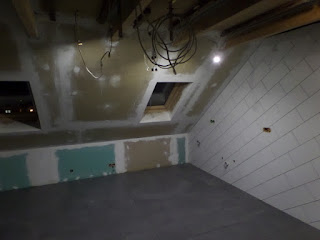 The lovely Mrs. Moiterei and me bought a flat in the heart of Nuernberg a few years ago. Now we're slowly about to renovate it. This year it was the kitchens turn to get a full make over. The walls were scraped clean of wallpapers, the seams between the sheetrocks newly filled and sanded, and the floor and one side were finaly tiled. Well, what's still to do? Plenty I'd say! Plastering the walls, building a new ceiling with integrated LED spots and assembling the new kitchen... With last years challenge also hampered by building works, my big goal is to be able to participate in next years challenge with the flat completely renovated and me taking full advantage of 4 weeks of winter holidays.

Well ok. As I suppose Curt isn't anymore likely to grant points for a terrain build , even if it's 1/1, than he is for office furniture, I should get on with something relevant I guess. 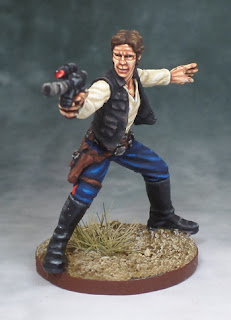 So here's my Curtgeld for this year. A (slightly larger than) 28mm Han Solo miniature from the Rebel Assault board game by Fantasy Flight Games. Actually this was planed to be my submission for the Nostalgia bonus round, but for reasons mentioned above I simply didn't get it done in time. So instead of waiting to submit it for the last bonus round (gamblers/ risk takers) I finally wanted to be on the roster. For god knows when I come around to paint something else than the kitchen... 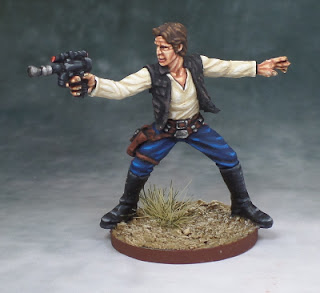 So why Han Solo as Curtgeld and why Nostalgia, you may ask. As you're all aware Curt has asked us for a miniature of a gambler and/ or risk taker. Anybody who knows the original three Star Wars movies will know Han Solo fits both rolls perfectly. He's a daredevil par excellence and when he's not risking his or the lives of his comrades he likes to play Sabbac (a Sci-Fi kind of Poker I'd say). And therefore he's also literally a gambler. 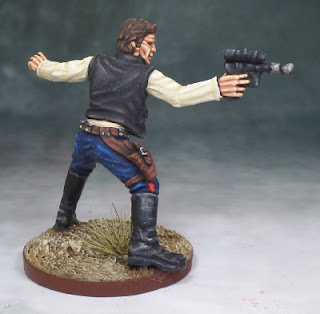 And why Nostalgia? Well, Star Wars was one of the very first movies I can remember watching together with my father as a child. Since the very first moment I was hooked by this epic tale of good versus bad. It never really let me go and always was a part of my life, one way or the other. Be it for books I read, toys I collected or even video games I played. Fond memories of X-Wing vs. TIE-Fighter on my very first PC spring to mind....

Well, I disgress. Han Solo always was the character I loved the most. No Luke Skywalker, no Princess Leia, no Darth Vader, for me it was Harrison Ford as Han Solo who made the movies to what they are. 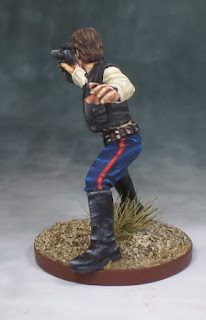 Due to the material used the figure was a pain in the back to clean but, except for some weak detail on the sleeves, was a joy to paint. In my opinion it captures the character perfectly and is a must have for any avid Star Wars enthusiast.
14 comments: