Impressions of 'Operation Squad': Last days of the Reich

As mentioned in an earlier post this weekend saw a game of 'Operation Squad' at Axebreakers and as an exception I managed to take some photos.

It's May the 6th in the year of the lord 1945. The Führer 'Adolf Hitler' in an act of cowardice has killed himself, Berlin lays in ruins and the Wehrmacht is in full retreat on all fronts. To save huge remnants of the german armies on the eastern front from russian captivity desperate rearguard actions are fought by brave men facing almost certain death.

In these desperate hours a small battlegroup is caught in a small pocket near Prague. To not let the secret codebooks fall into the Bolsheviks hands the soldiers take up their arms on last time.
The russians in a rush to get their hands on some of the last secrets of the Reich unleash the brutal might of the soviet sledgehammer. 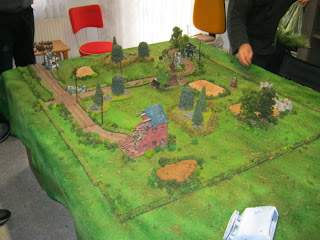 If I did everything right at the time you read this I'm hopefully already tossing some dice in a desperate attempt to stop the red tide... or maybe the allied advance into the Reich.

As I mentioned in the last post today will see another game of 'Operation Squad' at Axebreakers mansion.
With this in mind I decided to get some more support for my Luftwaffenfelddivision done.
I virtually painted till the last minute and the moment I'm writing this I know Franz and Mike are only minutes away to pick me up.

Unfortunately I ran out of Pigment fixer and so I didn't apply to much pigments only using White Spirit to stick the pigments to the model. Once the already ordered fixer arrives here I'll go back to improve the weathering. I hope you like it anyway: 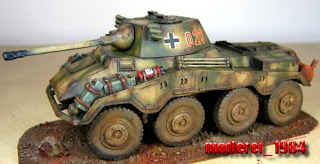 Rush for Berlin 14: New transports for the Felddivision commandeered

As the coming weekend will see another game of "Operation Squad" at Axebreakers I painted another 'Sd.Kfz. 251/1D' and an 'Opel Blitz' transport. Both models are from Warlord Games.

The Sd.Kfz unfortunately isn't one of the shiny new plastic ones I already painted earlier this year but one of those ugly old resin chunks. The rear MG was lost a while back. To be honest I don't really like the kit. Maybe I'll replace it at some later date with a plastic one and use this one as terrain marker. 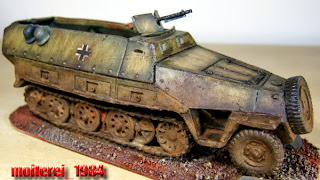 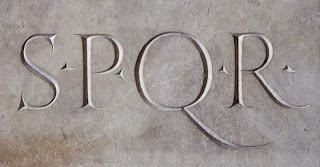 Over the last weeks I've painted some figures here and there but didn't manage to get anything finished to a standard I'd show here.

But these Republican Roman 'Velites' by Aventine Miniatures were standing on my desk for some weeks now waiting patiently for basing. So I sat down after work and gave these fellows their 'terra firma'. As I don't like basing that much and wanted to cut some corners I decided to use the Model Scene 'Grass mats with calc stones'. I still have to figure out how to use them best.

This time I used a knive to cut the mat where I wanted to place the miniatures. Then I glued the mat to the 12x6cm Impetus base using PVA. Afterwards I attached the miniatures to the already cut out positions.
Unfortunately at first the figures looked like sunken knee-deep into the ground. That's because there's some kind of felt beneath the foliage. The problem was solved by pressing the mat hard to the base till the glue was rather dry. Next time I'll glue the mat to the base first I think and then attach the figures on top the mat.

Ok now on to the pics:

The last view days were all about making some terrain for my gaming mat. I don't really like making terrain as I don't like modeling in general. I'm more painter than anything else. Even basing I only do as a necessary evil.
But as I'm going to host a game of "Bolt Action" from Warlord Games on Friday down at the club I urgently needed some nice stuff to put on the table.

Therefore I finally painted the "Ruined Hamlet" Set from Warlord Games I had flying around for some months now. Building the set proofed to be a real pain in the ass as most parts were bent and the parts didn't go together well.