I've postponed this little tutorial for much too long now. Primarily because, as it's so often the case, I forgot to take pictures of some crucial steps. But as Pat is waiting for it I thought I might just as well crack on and cover the missing steps in an upcoming guide. On the other hand there are already so many excellent tutorials, books and youtube videos out there, covering just about anything, one hardly needs me to explain every step in minute detail.

As it's always the case, this tutorial isn't meant to be exhaustive or THE way to do things. Thus feel free to add your own thoughts, criticisms or questions in the comments below.

Step 1: Primer
I think it comes hardly as a surprise but we'll start with the first and in my humble opinion, most important step the priming of your model. Maybe I should add I generally wash the miniatures before painting thoroughly using water and soap. This helps to wash away any residue of mould release or grease that might still stick to the model from the casting process or assembly and thus help to make the primer stick to the model readily.

To make the painting process easier later on I didn't fully assemble the Halftrack. The different parts were now given a thorough coating of Vallejo Black Surface Primer. Then the model was left to dry over night. I never instantly start painting the model after the primer as (in my opinion) the following coats of paint will hinder the primer to settle completely. 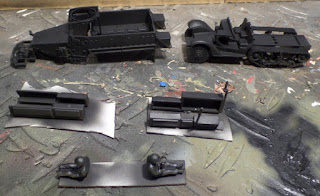 Step 2: Basecoat
After a good few hours (at least 12 I'd say) we can go on and spray the model with the base coat. It doesn't hurt to let the black base coat shine through in the deepest recesses either.
The model was sprayed using A.MIG-925 Olive Drab Dark Base. This paint is from the AMMO by Mig Jimenez range of paints and, for example, available in a set called Wargame US Armour Set which comes quite handy as it contains base coat, first and second highlight, as well as three other paints for camo, in one handy little box. The paints are especially made with the high contrast needed for wargaming models in mind. Despite being advertised as usable by brush and airbrush I wouldn't use them by brush as they won't cover as neatly as by airbrush and the contrast would be to stark in my opinion.

If you'd like to use a brush on paint I'd probably go for a 1/1 mix of Vallejo Model Colours (VMC) 887 Brown Violet and VMC 889 USA Olive Drab. For the highlighting steps I'd just mix in VMC 819 Iraqi Sand in increasing quantity. 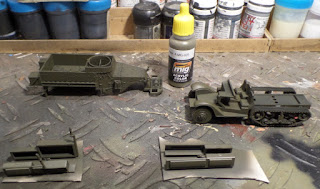 Step 3: 1st Highlight
The first highlight was applied using A.MIG-927 Olive Drab Light Base. I made sure to not cover the whole model but only the middle of the different panels letting the base coat shine through  in between the panels. 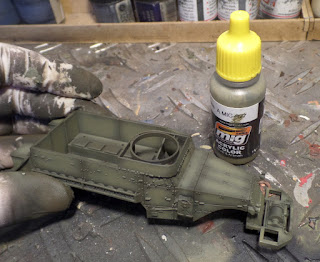 Step 4: 2nd Highlight
Generally the contrast achieved in step 3 is sufficient, but as I'm the kind of painter who likes his toys to pop while still doing heavy weathering  A.MIG-929 Olive Drab Shine was now applied. The contrast created does look quite stark now but believe me it'll look just fine when hit by the following weathering. Again I leave my model to dry over night. This will help the paint to properly stick to the base coat, or at least that's what I like to think. 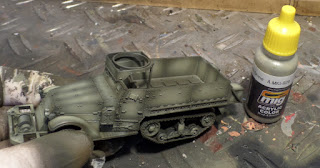 Step 5: Detailing, Decals and first weathering
You might notice that's quite a lot for just one step but frankly here's where I forgot to take pictures for the first time. So we just to have make do with what we have, I'm afraid.

The wheels as well as the rubber rims of the road wheels were painted using VMC 995 Dark Grey followed by a thinned wash of Army Painter Dark Tone Wash (Beware: Wash! Not the Dip stuff).

The tracks were then simply dry brushed with VMC 983 Flat Earth followed ba a wash of Army Painter Strong Tone Wash.
You can leave the tools like shovels, picks and fire extinguishers in olive as they were often oversprayed in the factory but I like to paint mine. This helps to create some interesting spots of color in an otherwise quite drab model. You can use what ever color you see fit.

Using a sponge or part of a blister foam little dabs of A.MIG-929 Olive Drab Shine followed by more generous dabs of VMC 822 German Camouflage Black brown were randomly applied to the vehicle with an extra focus on parts that may see special wear in the field. Some extra scratches were then painted using the Black Brown. The larger dabs and scratches were then given a 'lower rim' (don't know how to explain it better) of Olive Drab Shine with a tiny amount of VMC 819 Iraqi Sand added. This honestly quite tedious step gives the scratches a certain 3D effect. 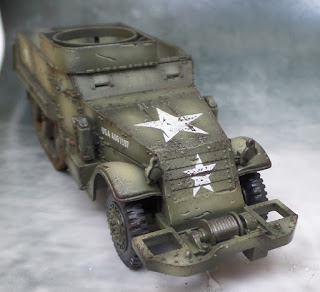 Step 6: The filter
On this model I, for the first time, didn't use enamel based filters and weathering products but went for oils. A few years ago I got hold of a few water soluble oil paints (frankly I really dont know how this magic works) by Reeves that lay all but forgotten about in my drawer. A more or less random mix was now pulled out to see if they're of any use for what I had in mind.
From previous search on the inter web I knew to try to avoid bright greens and blues as these seem to not blend in too well. 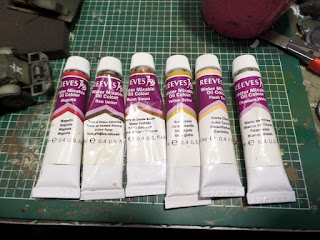 Small dots of paint were now applied all over the vehicle with a special focus to add the brightest colors to the top of a given area. The result does look  somewhat clowny as you can see below. More suited for a children's birthday party than for war. 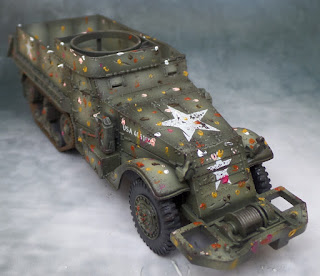 A brush dampened (not soaked or even slightly wet! Dampened!) with water was now used to remove the paint working vertically from top to bottom. You can stop this process whenever you're happy with the results or even go on and add a second layer of paint dots. The aim is to slightly alter the base colour and make it look more interesting. Not quite sure if it's all that visible on the pic below but now the once plain olive colour has a slight brownish, reddish or even orange tinge in some places. Leave to dry for at least 1-2 days as the oils need quite a while to fully dry even when almost completely wiped away.
To protect the progress so far the model was given a (last) coat of gloss varnish. 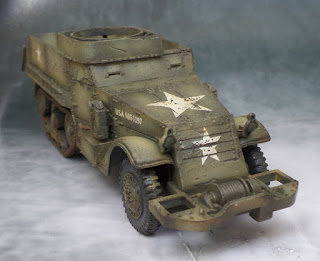 Step 7: Weathering
A heavily diluted wash of Reeves Burnt Umber paint was now applied to rivets and recesses. Give the wash about 3/4 of an hour to dry and then remove excess paint brushing with a damp (can't emphasize this enough) from top to bottom. You can also create rain streaks using white oil paint with this method. As before you can repeat the process as often as you want till you're satisfied with the result.
The tires and lower parts of the vehicle were now carefully dry brushed with VMC 983 Flat Earth. One can also use pigments but after several more or less successful attempts I'm still not really comfortable with it as it quickly can ruin the whole model. 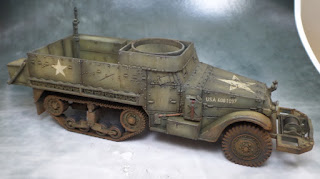 After the oils are completely dry a coat of matt varnish is applied both to protect the paint job and pull all the effects together. 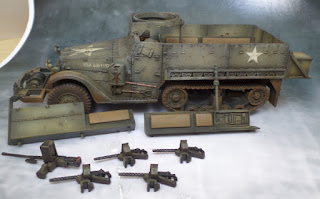 As you can see it took a while to complete the model due to drying times. So it's generally best to do a few vehicles at the same time to make it worthwhile.


I hope this little guide was of some help or interesting to some of you. As mentioned above feel free to add any tips, critics, questions etc. in the comments below.

Have a wonderful sunday and till next time!
10 comments:

WW2 Winter Germans - A 'not' project

For some reason I've recently felt inspired to try my hands on some winter themed figures. Probably this has something to do with Pats (of Wargaming with Silver Whistle fame) recent 'Setting the Scene' series of posts. Highly inspirational work and I strongly urge you to have a look. 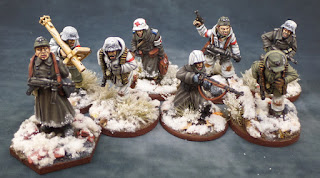 SAGA - The first Anglo-Danish ready to carve out a kingdom

I haven't played SAGA for quite a while now. But having finally talked a friend of mine into giving it a try, my interest was suddenly rekindled and I got straight to the work bench.
Besides my Late Romans I only have fledgling Norman and Saxon forces and instead of doing the smart thing and rounding these out I of course decided to start a completely new force. What self respecting wargamer would have done otherwise in my position, eh?
Anglo-Danish it had to be this time. 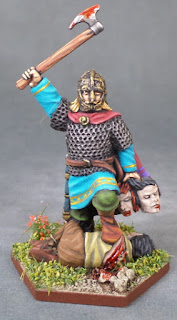