This years Painting Challenge seems to be rather slow going for me. Nonetheless here's my latest installment in the challenge.

I'm still alive and slowly beavering away on my 15mm Late Republican/ Caesarian Roman project for Impetus. Not much progress was made but I felt a sign of life was due. 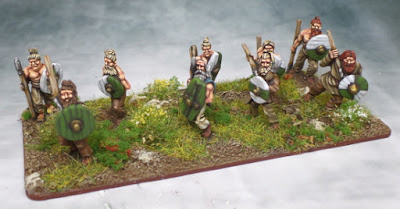 First are a base of Germanic Skirmishers who will fight alongside my Romans as allies. As my mate ChrisS went for Germans as opponents for my Romans I decided it would only be logical for me to incorporate a few Germanic allies into my army. Probably from a tribe on loggerheads with Chris' band of unwashed barbarians. Nothing wrong with letting these uncivilised animals kill each other before sending in the legions to mop up afterwards, eh? 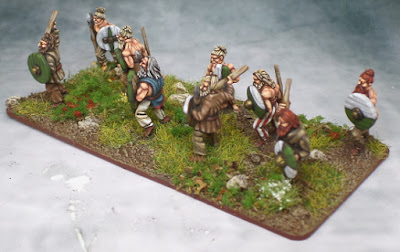 Miniatures are Forged in Battle again and I'm still impressed with the quality of their offerings. It wasn't till I was almost done with these when I realised I had painted their shields in the colours of my favourite football teams arch rivals. No harm though, this way it will only be easier to sacrifice them for the greater good I guess. Fortuna wills it. 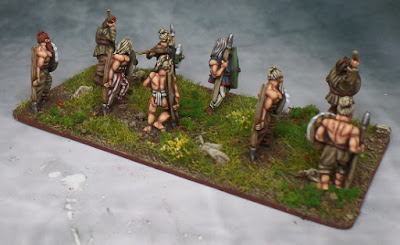 The next base is of no real combat value in Impetus other than to be attached to another base in order to depict the unit to which the General is attached to. I would have loved to include a pair of Lictors (no, not the Tyranid ones from 40k) carrying their fasces to symbbolize the high ranking status of the general but unfortunately I wasn't able to track some down in 15mm. Well, at least not till the base was finished and I happened to stumble across *these*. Next time I'd say... 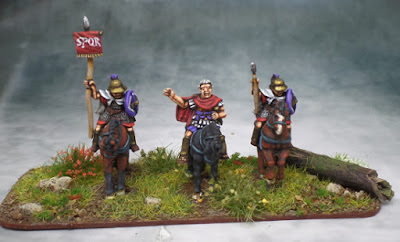 The General is supposed to depict Gaius Iulius Caesar, but in all honesty I don't see much of a resemblance here. 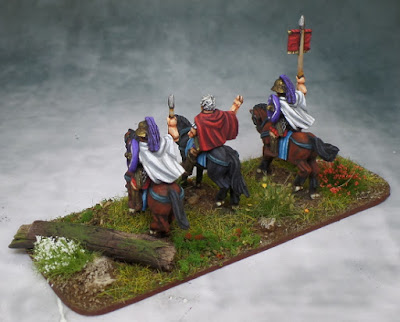 In order to not make it look silly when attaching the base to a unit of infantry I opted for a rather static pose with these miniatures. 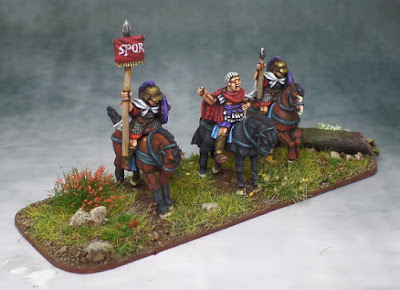 So, that's it for today. All in all this entry should give me another whooping 30 points towards my goal but unfortunately not enough to catch up with ChrisS in our little side duel.
11 comments:

With workload increasing to a completely unexpected level, I not only had no time swinging the brushes, but also to post my latest entry to the challenge. If things continue to eat up even the last bit of my spare time I can hardly see me reaching my goal of 500 points in this years challenge, let alone beating my friend Chris in our side challenge. But enough with the whining, here's the painted lead:
Once again work got in the way of enjoyable and civilized pastime. Nonetheless I thought it appropriate to show a sign of life, no matter how small. Thus I present to you eight 15mm Caesarian Romans from Forged in Battle/ Westwind Miniatures. The miniatures are based for use as heavy cavalry in Impetus. 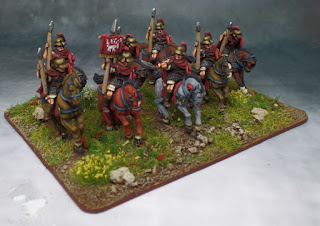 Except for some minor casting issues (the feet on some of the riders were not fully cast) these, once again were a blast to paint. I think I even enjoyed painting horses for the first time in my hobby career. 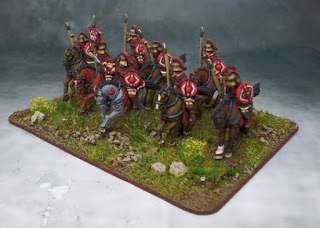 A few years back I started a Caesarian Roman project in 28mm, which, due to various reasons, never got off the ground. As mentioned in my last post I'm planning to go 15mm for some of my future projects, so I thought it might be the right time to revive this old favourite of mine only in a smaller scale. And no Curt, 20mm is no option ;-) While the AB figures are certainly nice, I simply can't get to grips with that particular scale painting wise. Don't want to rant again about the subject, but 20mm to me is quite a half-assed thing. Somewhere in between the pro's and con's of 28mm and 15mm. I'll stick with 20mm for my modern stuff, as decent Bundeswehr is hard to find in both the other scales, but nothing else... as of yet ;-) 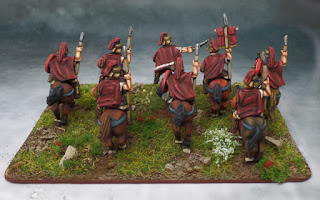 As I want my force to be based on Legio X Equestris I went for a heavily stylized bull on the signum. Thinking about how unwilling I normally am to do free hands I'm actually quite chuffed with how it turned out. The shields only got a basic geometrical design copied from Heresy Brush's take on the very same figures (sorry can't find an image for illustration). 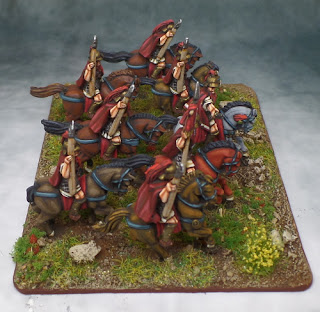 This should give me another 32 points to add to my total. This also helps me to cement* (well, 'cement' might be a bit over enthusiastic) my lead in the 'Bavarian challenge' with 285 (Having already added the 20 points from the bonus round entry) straight points vs. ChristopherS's 244 points.

*By the time writing this Chris of course already outpaced me by a formidable 49 points.

Meant to post this a lot earlier but work got in the way. Nonetheless the poll for your favourite interpretation of 'Defensive Terrain' is still open, so make sure you head over and leave your vote. 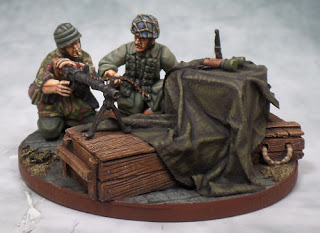 It was a close run thing but I finaly got something in to the bonus rounds. With a little more time at hand and a head full of ideas I enthusiastically dived head first into the preparations. At first I was planning to do a little WW1 diorama but, while having the right figures, lacked in the skill and patience to pull it off. Than, while rummaging through the attic, I stumbled across some old Warhammer 40k terrain which would have fit the bill and instantly set to work to pimp it up. When finished, but before painting, I actually realised that terrain isn't really the focus of the challenge and I'd need figures to go with it. Running short on time and not really feeling like spending crazy money on some Forge World Death Korps of Krieg miniatures (which I would have liked to use for the particular piece and am eyeing for some years now), it was now time to turn to plan C: the ever trusty and highly popular (at least with me) World War 2 plastics by Warlord Games. 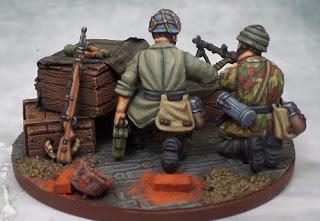 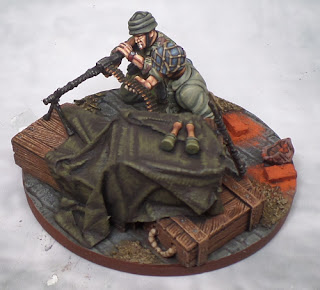 The figures are from the newish plastic Fallschirmjäger set converted using cutting, gluing, offensive speech and some pieces of the older plastic sets. I can't actually put my finger on it, but the Fallschirmjäger set left me a little unimpressed. I'm not exactly sure on why that's the case, as except for the detail, which is a little soft, it's in no way worse than the last sets. Maybe it's me comparing them to the older metal figures which have waaay more character. That said I hated the bad casting quality on the metal figures. 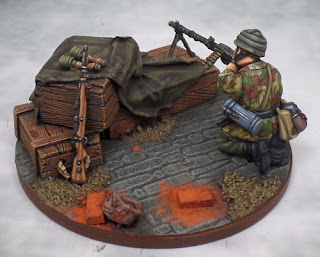 Using crates and some other paraphernalia from the bitz box I created a suitably 'defensive' looking base to go with the figures. To add a little interest to the otherwise still quite bland stack of crates, I added a camo cover made from tissue paper. A trick I already used in one of the last challenges. In order to be able to remove casualties, the loader was magnetised. 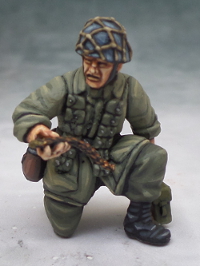 This entry should give me 20 points (10 for the miniatures and another ten for the crew served weapon) for the Bavarian challenge and an aditional 50 points for my over all target.
18 comments: