Like many other hobbyists, I‘m sure, I‘m a completist. When there’s a option in the force list, no matter how obscure, my brain goes into overdrive and I‘m off to look where to source that particular option from. Luckily enough since my switch to 20mm with my WW2 painting I‘m generally spoilt for choice. But there are still a few things I can‘t find or not in a configuration/ style I like.

That’s where 3D printing really comes in handy. Chance is someone out there has the files for what you’re looking for. Same with these Soviet Sappers/ Engineers.

Figures are originally 28mm files from mr3DPrint available on wargaming3d.com. I scaled them down to match my AB miniatures and surprisingly enough it worked rather well. Some of the equipment is admittedly a little flimsy and some minor bits broke off as I‘m rather ham fisted at the best of times. But still I quite like them a lot and they painted up nicely. Should maybe get me a resin that’s a little less brittle nonetheless.

Helmets/ heads and hands are somewhat on the larger side, especially when compared with their AB brethren directly, but not more than usual with wargaming miniatures. I’m still quite surprised by the quality my cheapish 1st generation Anycubic Photon is capable of. Good enough for any wargaming miniatures I‘d say.

Next we have a batch of 10 Soviet casualty markers by AB Figures. A little macabre maybe but I love casualty markers. I tried to make the skin look more corpse like and like to think it worked out surprisingly well. 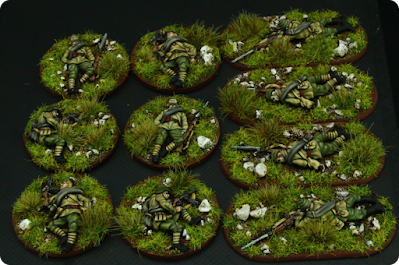 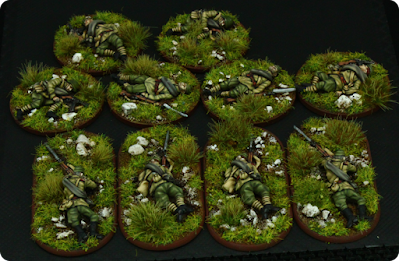 The 12th iteration of the Annual Analogue Hobbies Painting Challenge is underway and clearly I had hoped I'd have a little more to show for my efforts today, but alas I fell somewhat short of my self imposed goal. Anyway, I've got a few more figures finished for the 20mm Soviet force I started during last years challenge. By now it has grown somewhat in size and I keep adding to it.

In 28mm it's the Germans I keep returning back to whenever my painting mojo is at a low ebb, but in 20mm it obviously is the Soviets. The first few figures I painted for this force where done using the simple triad method, but by now I'm using as many layers as I'd use on a 28mm figure. There's just so much detail packed into these small fellas.

First off the starting block today is a DShK 12,7mm HMG with five crew. The DShK, it's gunner and the loader are from SHQ Miniatures while the other three figures are AB Figures. I'm not particularly fond of the SHQ castings, but once painted they fit reasonably well with AB. 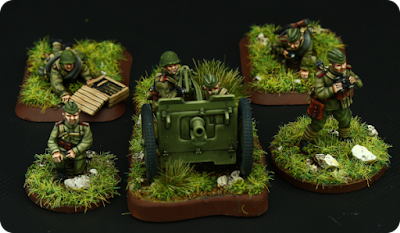 Next we have a 76mm M1927 regimental gun by Zvezda crewed by AB miniatures again. Zvezda make nice and cheap kits in 20mm and while the figures fit quite well with AB I prefer the latter and if it's just for the later uniforms as worn by AB. 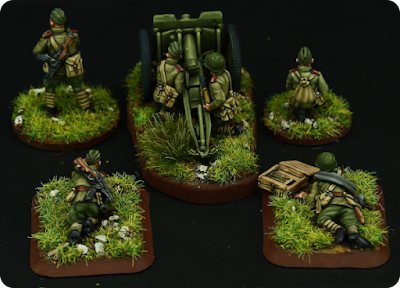 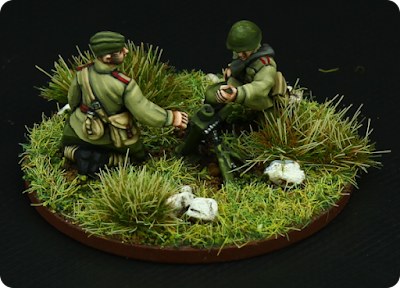 This is followed by a RM-38 50mm mortar. Again this is a SHQ casting, as is the loader. As before I opted to replace the other figure as they're so much nicer. 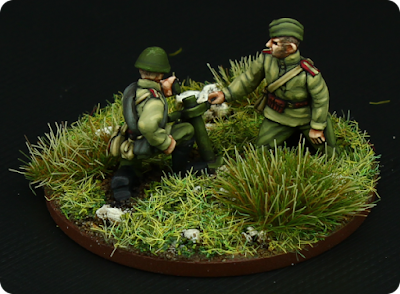 Also on offer today is a ROKS-3 flamethrower team. A nasty piece of equipment you shouldn't leave home without.

And last there is a tank hunter team armed with liberated Panzerfäuste. Not really suited for Kursk but quite appropriate for Operation Bagration in 1944.

Also there's last weeks figure still to be posted:
Those of you who know me, will also know that I’m not big into Fantasy or SciFi. Painting wise that is, as otherwise I quite like the Warhammer 40k universe. Well, as it was about 20 years ago anyway. Be that as it may, once in a while there‘s an itch to be scratched. While cleaning up the man cave and organising my Mountain of Shame …ahem… Mountain of Opportunity I happened upon a handful of Legion of the Damned Space Marines. I‘m not sure where I‘ve got these from, especially considering I haven’t painted Marines in almost two decades.
So, while I don’t really dig their official paint scheme I quite like the figures (for Space Marines). Thus I‘ve been wrecking my brain ever since as to how to paint these fellas. By chance I came across some pictures of really nicely painted Word Bearers and instantly knew the look I‘d aim for. 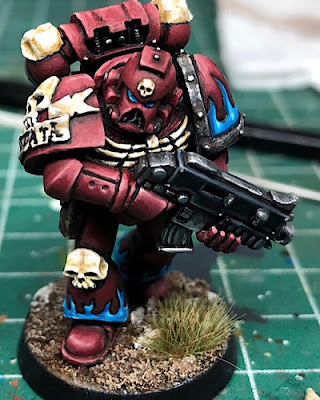 I fancy mine to be Marines of… let’s say questionable loyalty, and with little to no „official“ imperial iconography the models fit just nicely. On the other hand the distinct lack of spikes and other distinctly chaotic paraphernalia also helps to make them more rogues than outright traitors. Apostates maybe… 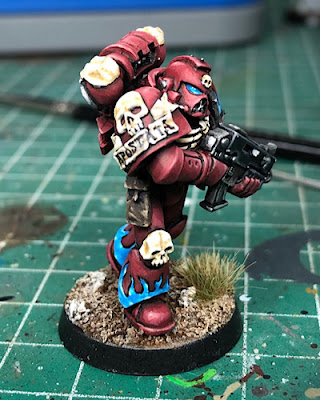 I‘m not quite sure where I‘ll go with this as Space Marines never really were my thing, but I might just paint up the rest of the ones I already have. They should be enough for some Kill Team sized games. And admittedly painting Marines can be quite fun for a change. All the big, smooth surfaces make for an interesting challenge and are ideal to try out new things. On another note I‘m quite surprised my smartphone camera makes rather usable pictures, without too much fuss. Unfortunately single figures only, so no groups, and not in a photo cube… 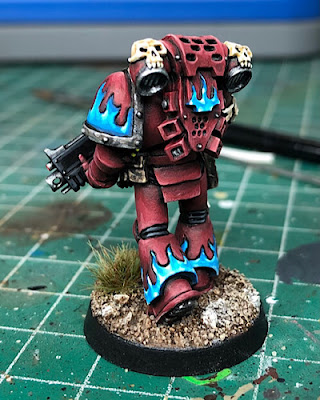