August is almost upon us and somehow it seems to me like 2016 is going to be the "Can't get my finger out" kind of year. Well, it's how it is and complaining never has changed anything, eh?
So here's the latest progress in my uphill struggle against the lead mountain: 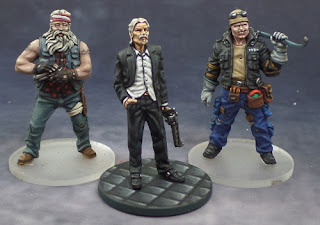 These fellas are from the Zombicide board game made by Guillotine Games. Some might remember my earlier takes on some of the survivors from the original core game.
The well dressed chap in the middle is Bill the former prison director, a special promo miniature. Most (or all?) of the Zombicide characters are modeled after famous movie characters. But as I almost never watch any TV I unfortunately don't know on whom this figure is based. 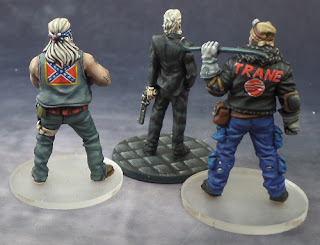 The two other guys are from the "Angry Neighbors" expansion. Being companions (i.e. NPC's) rather than actual survivors I based them on clear acrylic washers to make it easier to distinguish these from the rest. The fellow on the left is dubbed 'Gunman' and I felt it appropriate to make him look like an elderly member of a biker gang.
The companion on the right runs under the label 'Handyman'. Being a craftsman by profession I simply couldn't resist the temptation to paint him up in my companies colors.

So that's it for this time. Have a nice sunday!
15 comments:

Email ThisBlogThis!Share to TwitterShare to FacebookShare to Pinterest
Labels: Zombicide

Not much of a progress on the painting front lately but at least I got another point of Hearthguard for my Anglo-Danish war band for SAGA done. 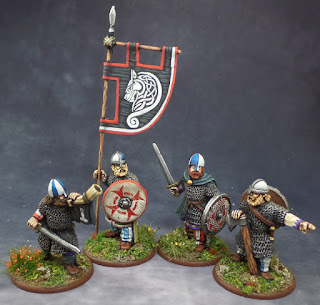 ... or at least some of his infantry. Some of you might remember the beginnings of this project during this years Analogue Hobbies Painting Challenge. It has taken some time but now I've finally finished my first stand of legionaries, along with some barbarian light cavalry, for my Caesarian Romans.

Having already finished all those bases requiring a relatively low figure count, like Cavalry and Skirmishers, I got somewhat intimidated by the prospect of painting a whole base of heavy infantry. Especially as I already knew I wanted to recreate that look of massed ranks so closely associated with the ancient way of waging war and with the Romans in particular 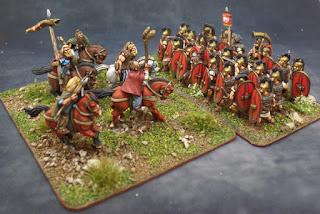