Last day of july and I actually managed to finish some stuff. As the heat finally ebbed away, or at least for now, I felt able to get some painting done.

At some point this year I want to try out the 'Bolt Action' ruleset from Warlord Games and therefore I need some more Germans and definitely some more armour. 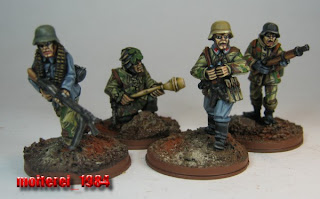 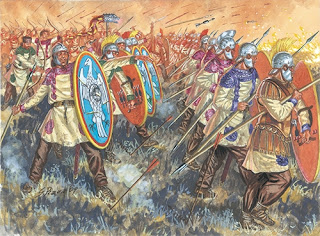 For more than two weeks I didn't even see my painting table. It was simply to hot to even take up the brush and my profession as an "Airconditioning & Refrigeration" craftsman led to me running round in circles at work. But after Chris writing up a short report about our last games of 'Dux Britanniarum' over on his Blog, I had to get my arse up too. As I can't remember the details correctly I'd recommend to you to check back on his Blog for further details.

Theodosius could almost hear the chatter behind his bag. "The simple" they called him nowadays when they thought he was out of earshot. 'Was it my fault that these drunken bastards didn't get up in time to catch the saxons before they could raid the church of Sheepsend?", he mused.
It was time to knock some heads together, Theodosius decided and went of to get his soldiers back on proper duty.
"Maybe I should start with Ellifer the old crock...", Theodosius wondered quietly "...the boys don't call him Dungbreath for nothing."

Two weeks later Eliffer stood on a hill and tried to shirm his eyes from the sun. Far in the east he believed to see the towers of his (at least for the moment) kings castle. With a awkward motion he rubbed his head and turned back to the men this son of a humiliore Theodosius has sent with him to scout the western parts of the kingdom for any signs of the saxons. "Of course we didn't see anything near to a saxon" he muttered and spat out. "This dickhead wanted to make an example of me, wanted to silence me because I told the truth about his failure at this church." Caught in his own thoughts he didn't realise the blinking of speartips and the scratching of shields against chainmail to the north. Just as it was almost to late Brutus, his second in command, let out a nervous shout...

The first game was about the saxons had to catch a noble, on his way back from scouting, for ransom.

It's been a while since I last dipped my brush into some paint, but as we all know real life can sometimes be quite tedious. None the less my PaK40 is finally finished... at least I thought so. Having bought the "Operation Squad: Reinforcements" Supplement via the Wargamevault yesterday it took some time till I realized that I need a fourth man for the crew. Same for my mortar... :-/ Means I have to get back to my painting table to paint up at least two figures to bring my heavy weapons up to paper-strength.