Following on from last weeks Colour Guide on the summer version of the Oak Leaf camoflage pattern today it's time for the Erbsentarn or Pea Dot pattern. Both camouflage patterns were widely used at Arnhem. But beware Pea Dot pattern was never used on anything else than uniforms and field caps. There were no smocks, no helmet covers, no mittens or even Zeltbahnen in this pattern.
Thus I went for the Oak Leaf pattern for all of these items as this was the most widely distributed at the time.

Step 1:
The uniform is painted using a base coat of VMC 70.871 Leather Brown. As I won't add any highlights later on I made doubly sure to let the black primer show in the recesses and seams thus adding some depth 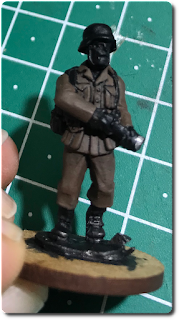 Step 2:
This was followed by random spots of VMC 70.876 Brown Sand. Again I stop at seams and crevasses to add interest and hint at the uniform being sewn together from printed cloth instead of camo being painted on afterwards like with the British Denison Smocks for example 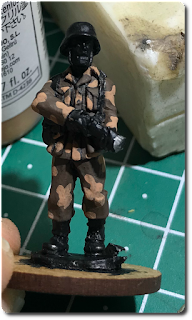 Step 3:
Now dark spots are randomly applied next and partially on top of the light spots using AC Fieldgrey 2nd Shadow. Any other dark-greyish green can be used just as well. Don't use pure black though as the contrast would be too stark 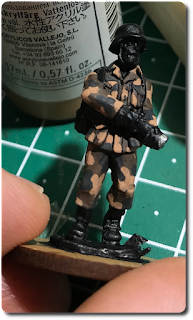 Step 4:
Now the last layer of bigger splodges is applied using VMC 70.881 Yellow Green. As before make sure not to cover your black lining but instead let the different coloured spots slightly overlap 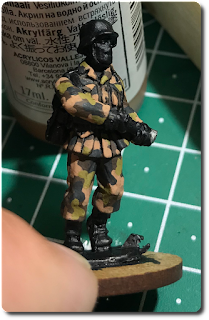 Step 5:
Now comes the fun part. The small dots. Using a brush with a sharp tip I painted small dots of VMC 70.871 Leather Brown over the brighter (i.e. Sand Brown and Yellow Green) spots. Don't bother with spots on the Dark Green as they'd disappear due to lack of contrast 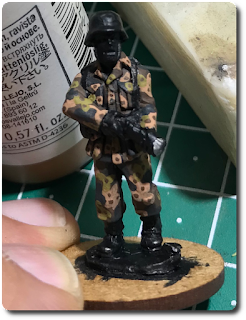 Step 6:
This is followed by small dots of AC Fieldgrey 2nd Shadow. Don't over do it as less is sometimes more 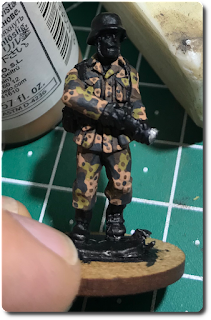 Step 7:
Now in a final step small dots of VMC 70.876 Brown Sand and VMC 70.857 Golden Yellow are painted on top of the darker areas. It's not necessary to paint dots on the brighter areas as with the dark spots before these would disappear do to lack of contrast. 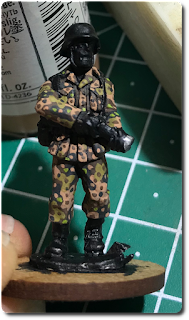 So, there you go! Quick and easy Pea Dot pattern camouflage for your SS thugs. 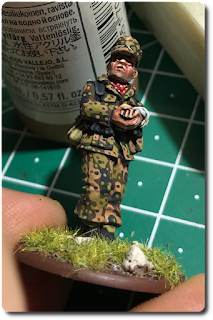 I hope this short guide was of use to some of you. As ever, should there be any questions or you'd want me to do a specific Colour Guide just let me know in the comments below.
16 comments: