Fall of the western Empire 4: First Group of Palatinae

Recently I needed some distraction from painting the limitanei so I decided to draw my attention on the scholae palatinae. As they wear the lorica hamata they were easily painted up and much fun to paint.
In terms of SAGA they are counting as hearthguard worth 1pt. for 4 miniatures. 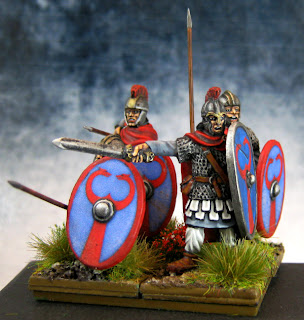 As I promised a few days ago I did the second part of the "Open Fire" review.
For everyone who missed the first part *here* you can find it.
As always you can find the german original over on GW-Fanworld.net.

As I already already advertised in the first part today it's all about the miniatures and tanks the "Open Fire" starterset contains.

On the first glimps the tank sprues don't look that bad and because of the different colours (grey for axis, green for allies) even a layman can easily identify which faction the tanks belong to.

This week I had a bit sparetime so I started painting up the second unit for my late roman SAGA warband though I only finished four of them. Again these are limitanei counting as levies for SAGA. 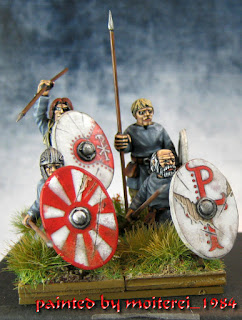 As my hobby time was somewhat restricted this week I didn't paint up enough worth of showing it here.
But as I did the first part of a review on the new "Open Fire" Starterbox for Flames of War I thought I should post it here too.
As always you can find the german original over on gw-fanworld.net.

For readers preferring german for reading thie review, just head over to GW-Fanworld.

The "Freikorps Werdenfels" are the newest range released by a small but nice miniature company from Germany.
Paul Hicks, a well known sculptor, is accountable for designing the models of Tsuba Miniatures.
Up to now this company especially produced miniatures covering the "Russo-Japanese War from 1904 to 1905". With the Freikorps available now they do a range covering the period of civil disturbance following the end of World War One.


Especially in Germany the Freikorps represent an delicate subject. Following World War One the Deutsche Reich according to the "Treaty of Versailles" had to reduce the strength of the Reichswehr (Reich defence) to 100.000 soldiers and about 4.000 officers. Lots of former german combatants didn't willingly accept this fact and therefore the Freikorps arose. Particularly because of their reactionary ideology and brutality they made their mark in german history. Some of these paramilitary organisations later merged into Hitlers Sturmabteilung (Assault Division) the so called SA. Markus from Tsuba Miniatures released lots of informations and bibliography on his Blog: http://tsuba-miniatures.blogspot.de/


Now to the important part, the miniatures:

Up to now the range is made up of 19 miniatures in five sets. You can get your hands on Command (including an dachshund under license from ebob), Specialists and Riflemen advancing or firing which are sets made up of 4 miniatures at a time. Also there's an HMG team consisting of gunner, loader and teamleader.

Unpacking the miniatures the quality and crisp details instantly stroke my eyes.
There's virtually no flash and displacements misshaping the figures. 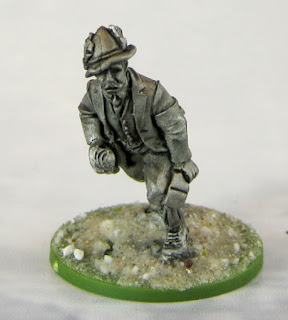