Some 15mm for a change

After having painted a sizable US Paratrooper force for the Battle of the Bulge over the last two years, I decided it was about high time to give them some opponents...

No, in fact I started work on some US Army guys ready to invade Tunisia/ Sicily/ Normandy. Figures are the current Battlefront plastic offerings. I got them for a steal which meant instead of painting up some Brits for a change, I was stuck with US... again.
The figures are OK-ish. Better than most of their metal ones but still there's the odd miscast in the mix.

Bring on the armour!

Having had a few days off this last week I decided I'd would probably make best use of it by painting up some of the armour, that was sitting unfinished on my shelf for months now.
While I generally like painting armour I need to be in the right mood for it, as firstly I actually quite hate airbrushing and secondly I'm always worrying about overdoing the weathering. 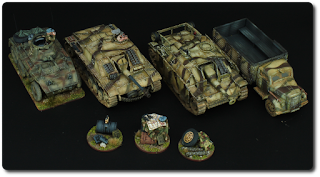 Who would have guessed? Three consecutive entries in just as many weeks. Seems like while the challenge slowly but surely is drawing to a close my hobby boat is finally taking up some much needed steam.

This week sees me back at a project I keep returning to time and again, but never quite seem to have the stomach to see it through. 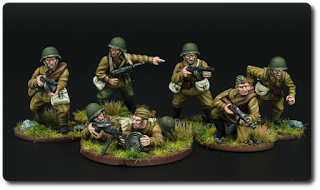 Just a token submission today as life has once again got rather busy around here. I won't bore you with the details as I know you all will be familiar with such moments in your hobby lives.
After having just recently made the switch from Bolt Action to Chain of Command -and not having regretted it for a second- I felt the need for adding a few items to my Fallschirmjäger force. 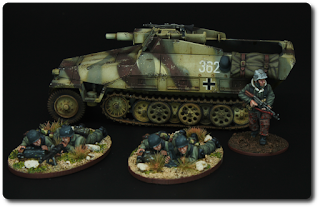