Well, I don't normally do any reviews on here but I felt the latest plastic release by the Perry brothers warranting a change in routine.

But first things first:
Neither did I receive the miniatures for reviewing purposes, nor was I offered any compensations in order to do so. Also I don't have any affiliations to any of the companies named in this article. Thus all of the below is purely my (completely subjective) opinion and thus you may feel free to disagree with my conclusions. 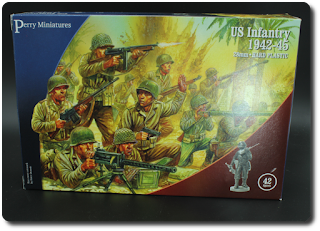 At this years Salute Perry Miniatures released their eagerly anticipated US Infantry 1942-45 set. And guess what? I wasn't there to get hold of it on the day.
Thus as soon as it became available through my preferred online-retailer of choice MiniaturicuM I ordered a box. Actually I ordered a few other things for my SCW project in the first place and as my American Infantry Platoon for CoC needed some reinforcements anyway I thought it wouldn't hurt to order the box. At 19,95€ for 42 miniatures it wouldn't be that much of a loss if I wouldn't like it. 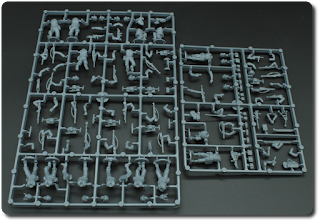 The basics:
Within the box you'll find one sprue each of round 20mm bases and rectangular bases (not pictured) as well as two command sprues and three sprues for the ordinary infantry.

The figures in the command sprue don't have any ammunition pouches modeled so you can add as required from the pouches provided in both sprues.

Of the 12 figures in the Infantry sprue only 8 come with M1 Garand ammunition pouches moulded on, so the rest can be equipped as needed without the need for plastic surgery.
All models in both sprues come in the M1941 Field Jacket, commonly referred to as the Parsons Jacket, and wear gaiters. Thus the figures can be used from the start of the Tunisian campaign right through the war till the final days.

The size comparison
The new Perry US Infantry are straight 28mm from foot to eye and thus should go well with most ranges currently out there. They fit almost perfectly in size and proportions with the current WW2 offerings by Empress Miniatures sculpted by Paul Hicks. Even when compared with the more heroically proportioned figures like Artizan (or Crusader for that purpose) and Warlord they should fit in reasonably well, especially when seen from an arms length. Keep in mind though, that the Warlord Blitzkrieg figure in the below photo is one of their older sets. More recent sets appear to be... bulkier, to keep it polite. The weapons are a little more fragile than on the last mentioned miniatures, thus when you're a little picky (like me) you should keep them in separate squads. Your mileage may vary though.

Well, those who follow my blog on a regular bases may know I'm usually, to put it mildly, rather sceptical in regards to Perry Miniatures. Usually that has to do with the abysmal casting on their metal figures, but having bought (and sold off soon afterwards) the original ACW as well as the 8th Army set I wouldn't actually call myself a fan of their (post-GW and Foundry) efforts.
That said this newest set is absolutely outstanding in my humble opinion. The figures are well proportioned, as I have to admit is usually the case with Perry figures, with crisp detail and a good selection of dynamic and more static poses.
Mouldlines are few and far between and are easily removed with the help of a sharp knife.
So all in all I'd rate this set with 9 out of 10 chocolate chips.