Hot on the heels of last weeks Colour Guide on how I paint my Early War Germans I felt suitably inspired to write another one. But this time I'll not tackle some obscure German unit but British Paratroopers. The world famous Red Devils. I'm beavering away on this force for several years now but as of yet there's not nearly enough for a game. Another particularly useful list of colours for British Airborne Troops by Tamsin can be found over on her blog: wargaminggirl.blogspot.com
She has probably done way more research for her British Airborne Project (which by the way is also actually finished) than me. So if in doubt I'd go for her paint suggestions.

Shade - 50/50 mix Shade/Base - Base - 50/50 mix Base/Highlight - HighlightIn general what I'll give you in this tutorial is the three colours as if used as simple triads. If you prefer the more elaborate approach just add in the intermediate steps mentioned above, or start from an even darker Shade or end with a lighter Highlight.

Note: I haven't documented every single step for this Colour Guide, so you might want to refer to some of the guides I wrote earlier. To do so just go to the top of the page where you'll find a link to a page containing direct links to all the Colour Guides I wrote to date.

Step 1: Battledress
Most commercially available Paratrooper figures out there will probably all sport the famous Denison smock. So this step will basically only ever concern us for the trousers of the battledress. 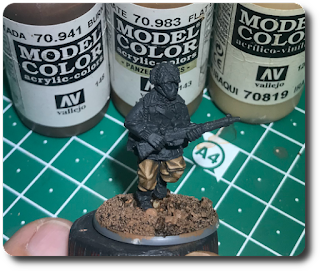 Step 2: Denison Smock Base
As usual I went a little lighter on the base colour than is historically accurate. This will help the figures to stand out a little more on the gaming table. And you can always blame fading. 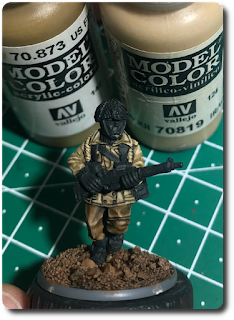 Step 3: Webbing
I used to use different colours for ruckscks, gaiters and other webbing but found the overall effect wasn't worth it. After all the webbing worn by British troops in WW2 (and well after) was blankoed by the soldiers themselves. Thus I think it's highly unlikely for a soldier to carry equipment in such different hues that it'd really stand out on a 28mm figure. 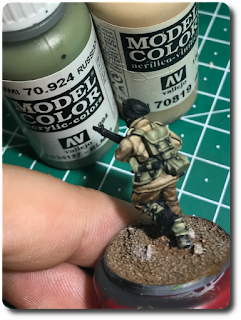 Step 4: Camouflage Patches
In order to recreate the faded look to the camouflage patches that is so emblematic of the Denison Smock I use glazes. A glaze is paint highly diluted with a medium (e.g. water or even better a Glaze Medium) to a point where it gets semi-translucent. One drop paint to about four drops of medium should be sufficient. Then the wet brush is dragged over a piece of kitchen paper until it's almost dry. 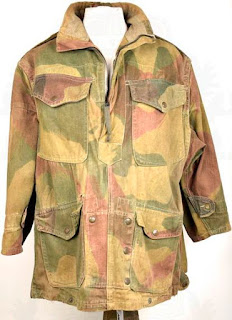 Now draw the moist brush in random strokes all over the smock. In fact it actually makes sense to do this step before painting the webbing equipment. Should the paint be too translucent for your liking just go over it again when the first layer has dried sufficiently. After this use the other colour and repeat the process. Make sure to let the colours overlap in some places. The nice thing about glazes is similar to washes the shading will happen automatically. 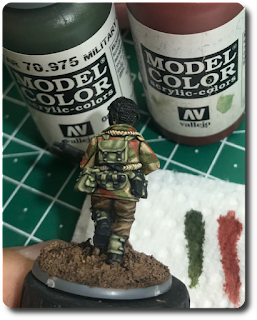 Step 5: The Red Beret
In fact the Beret should be more maroon than a bright Ferrari red, something Tamsin let me know back when I did my first Paratroopers all those moons ago. 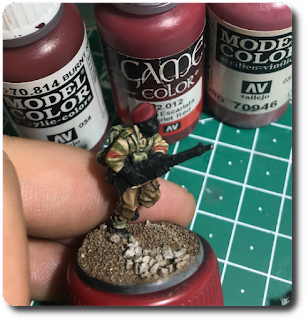 Step 6: Helmet Cover
Unlike the German Wehrmacht which often used helmet covers with printed on camouflage patterns the British used netting to disrupt the shape of their helmets. 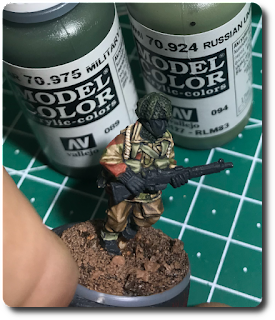 The scrim (?) came in many different colours ranging from a dark green over a deep, reddish brown to almost beige. For sake of contrast I decided on a light, almost beige brown. 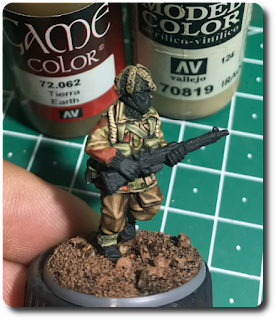 Step 7: Rifle stock
As I changed over from Foundry to Vallejo paints I also had to look for a replacement to my trusty Spearshaft triade which I previously had used for almost anything wooden. So that's the closest I came up with to date (Don't know why there's Flat Earth instead of Beige Brown in the picture). 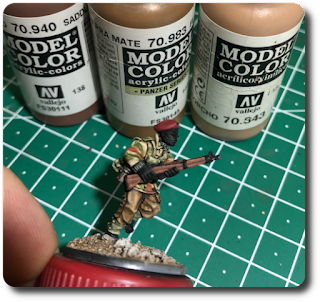 So another Colour Guide done and just a few hundred left before I've finally covered any uniform variation worn during WW2. If you found this guide useful, have a question or remark concerning this or earlier colour guides or you'd like me to do a particular colour guide in the future just let me know in the comments below.