A few people have asked me to do a quick tutorial about my approach to WWII splinter pattern or officially "Buntfarbenmuster 31". 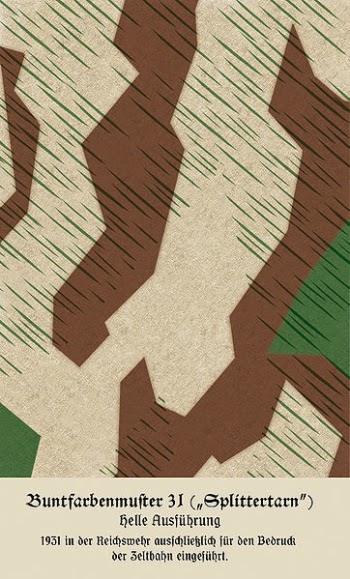 Please remember I'm not doing a 1:1 replica of the original pattern but a version suited to be viewed at gaming distance. When referred to Vallejo colours go for the Vallejo Model Colour line of products. The figure used is a German Fallschirmjäger from Warlord Games. So here we are:

Step 1:
Priming and basing the model 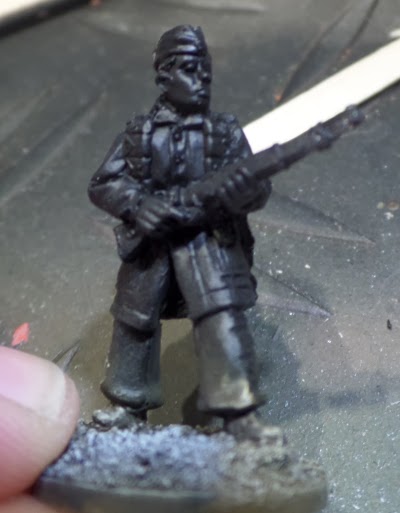 So far nothing new here. For basecoating "Acrylic-Polyurethane Black Surface Primer" by Vallejo is used. It gives a nice flat finish when applied by airbrush and can be brushed on to touch up areas not covered with the airbrush. Of course you can still use any kind of base coat you're used to.

Step 2:
Base colour and black lining 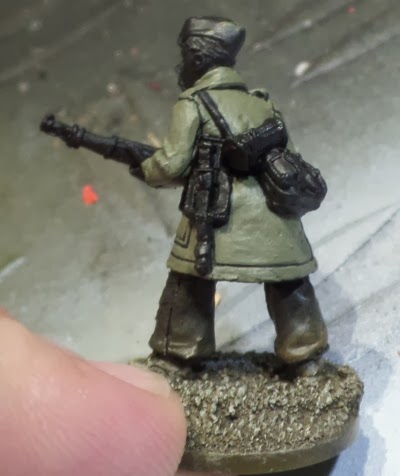 Now the schmocks base color is painted on using Foundry "Moss 29A" . Any light yellowish green or even Vallejo "Iraqui Sand" mixed with a little green will do. I also used Vallejo "Buff" already and it looked nice but I prefer a more greenish tone even when the original pattern tends to be more greyish in tone.
As a big fan of black-/ dark lining I pay attention to let the black base coat be visible at the seams and around items of equipment. To me it makes the figure pop in the end but it's definitely not essential to get a nice camo done. 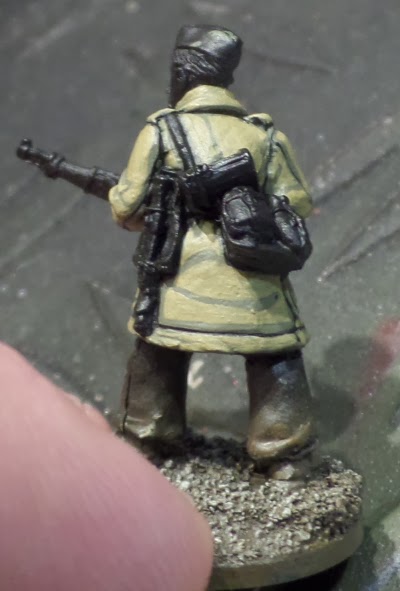 Now the middle tone is brushed on using Foundry "Moss 29B" leaving the base colour visible in the deeper folds of the cloth. As before you can use any light yellowish green. 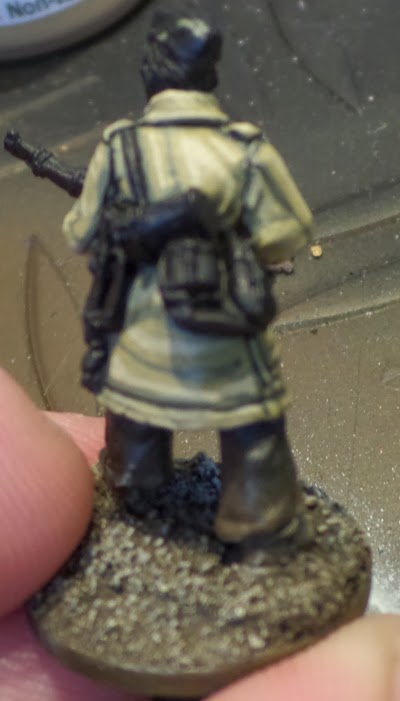 Now the highlights are set by carefully brushing on thin lines of Foundry "Moss 29C" on the most raised areas of the schmock. And here we are... the most boring part is done. 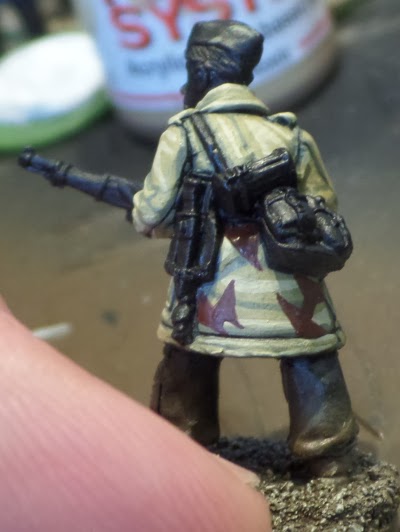 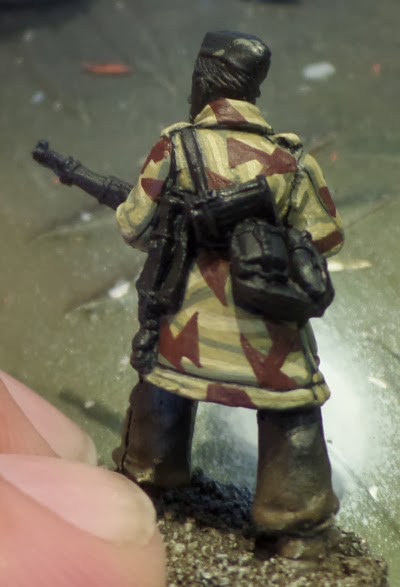 Using Vallejo "Hull Red" the brown patches are painted on. In my opinion it's easiest to start at the corners and/ or seams and paint on simple triangles. Be careful to paint sharp tips for the triangles as it's the most important part to make the camo look right. You'll see it will not look half as decent when you paint on simple brown blobs. For the patches not placed at the corners or seams it's best to stay with randomly set triangles and join two or more (being close of each other of course) by a simple thick line (like above the gas mask canister or below the haversack). 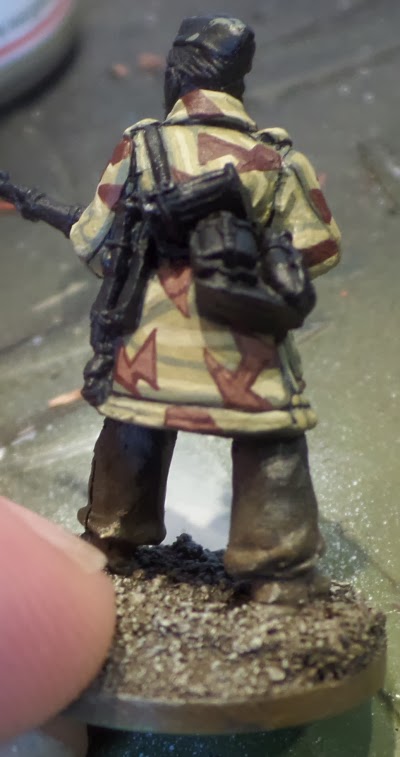 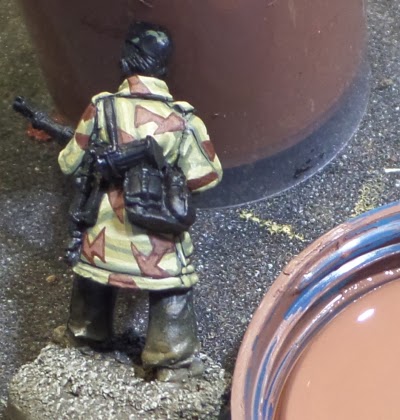 In this step the brown patches are highlighted. Therefore I used a roughly 70:30 mix of Vallejo "Flat Brown" and Vallejo "Iraqui Sand" giving you a nice terracottaish brown. The mix is painted on leaving only the edges and maybe the deepest recesses (for example at the crook of the arm) of the Vallejo "Hull Red" visible. 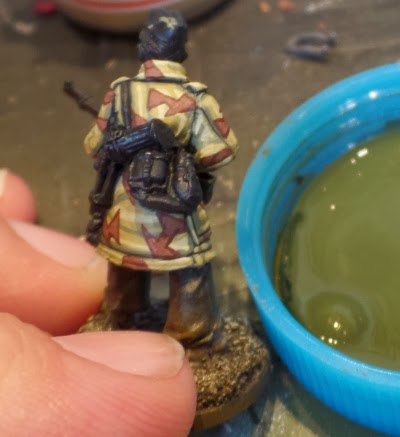 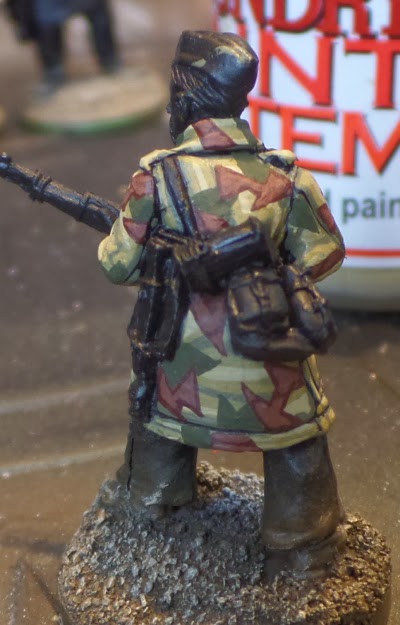 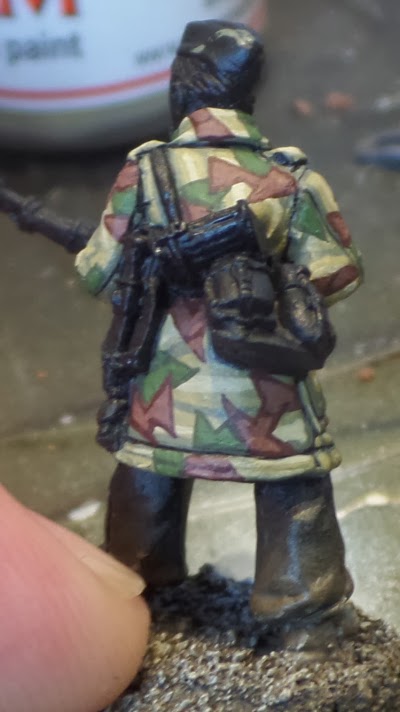 For highlighting the green patches the same approach is used as for the brown ones. The colour used is a roughly 60:40 mix of Vallejo "Luftwaffe Camo Green" and Vallejo "Golden Olive".
For simple gaming needs you could end here and still have a very presentable version of the Buntfarbenmuster.
Alternatively you also can do it without all the highlighting of the patches and apply a coat of your preferred wash or dip. But remember to go for lighter colours then as the wash will tone down the colours quite a bit. 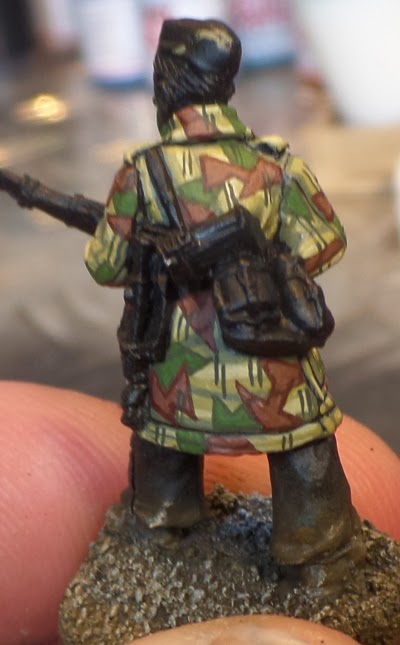 Some would argue that the so called "Raindrops" wouldn't even be visible at this scale, especially at gaming distance... and you're perfectly right. But for me the raindrops are the cherry on the cake of painting this very camouflage. It's almost like painting eyes... for some people it's absolutely needless - for the others (like me) it's the last bit of effort which brings the figure (or in this case the camo) alive. But I disgress...
For the raindrops a very thin brush (I already tried it using a needle with some success) is used and simple pairs of fine lines of Vallejo "German Camo Dark Green" are painted on vertically.
I only paint on pairs because it's only ment to represent the raindrops. Trying stay historically accurate and paint on more would cover the whole schmock with these lines and ruin the effect.

I hope this little tutorial might be of any use to at least some of you. I'd also like to hear about your approach to the splinter camo. So, I hope you enjoyed and thanks for reading!