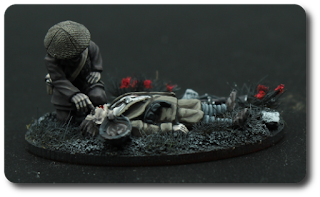 The above quote by Ernst Jünger, an officer during both World Wars and author of the famous  "Storm of Steel" where he recounts his experiences in the Great War,  pretty much sums up my thoughts when creating this little vignette.


"It's not what we're fighting for that's important, but how we fight."

While the quote is taken completely out of context -for those interested it's taken from the 1922 essay "Der Kampf als inneres Erlebnis"- it still rings true on its own I feel. In a struggle for survival where each breath you take could be your last one, it's how we treat our fellow men, be they comrades or enemies, what separates the human from the animal. 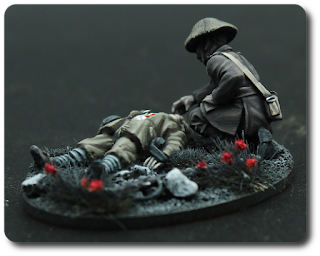 It's all too common for the animalistic side in us coming to the fore when put under pressure. Even more so when our lifes are at stake. When the pure will to persevere, to survive is the only thing that keeps men going. I think that's when the world is at its darkest. 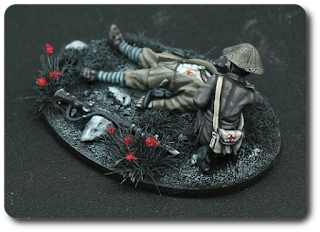 But when the world is getting darker it's the more important to see those bright little flashes. Those acts of humanity, of selflessness. It's cheap and easy for all of us to call for justice, for empathy when sitting in a cushy chair, far removed from those dark corners. But when you find yourself in the thick of it, when bullets whistle by or shells explode around you, or you have to stand in for your believes, live up to your ideals in the face of darkness, that's when it's most important for us to remain human. Not to succumb to the beast that lurks in all of us. 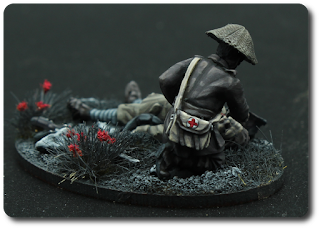 So with rather dark and gloomy thoughts like these in my mind I set about to create my entry for "Fellowship". Fellowship in this case meaning not simply a tightly knitted group of people like in the probably most famous fellowships of all, the "Fellowship of the Ring" By R.R. Tolkien, but more the general fellowship of men. I'm not a religious person, but apart from Ernst Jüngers quote above, another phrase that came to my mind time and again while I worked on this vignette was: "Whatsoever you do to the least of my brethren, you do to me. (Mt 25:40)" 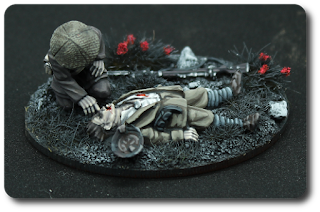 The vignette was created from several different pieces. The fallen soldier is a German casualty figure from Great War Miniatures, The British medic is from a character pack by Woodbine Design Company (sold by Gripping Beast), who was given an helmeted head taken from a Late War British figure from Great War Miniatures. The right hand was replaced with a plastic one from a Warlord Games sprue and the arm was repositioned as to look as if gently closing the eyes of the recently fallen enemy. The discarded rifle again was taken from a plastic sprue by Warlord.
Originally I had intended to paint a "Triptych" of vignettes depicting different interpretations of the same theme. But alas time constraints saw this plan come to nought. 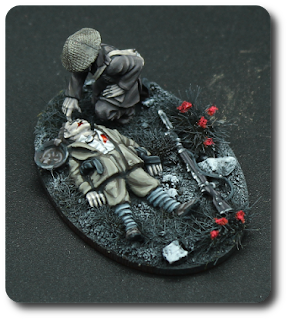 Given the rather dark theme of this entry I thought it only fitting to resort to painting it in greyscale as I did with my Indochina Wars project a few challenges back. Despite the dark mood I enjoyed working on it immensely.