I don't know what it is but WWII, especially Germans in WWII, always gets my creative juices flowing. So I made the most out of it and immediately got going on some heavy weapons to go with my other stuff.

First in the line is the infamous MG 42 auf Lafette. When used in its role as heavy machine gun on mounting the MG 42 was designated "schweres Maschinengewehr 42". The mounting was almost similar to the one used for the MG 34. 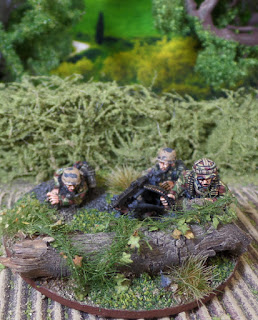 Introduced in 1942 as a replacement for the more difficult to produce MG 34, it's considered one of the best if not THE best MG ever produced. With minor modifications, notably chambering it for use with Nato standard 7,62x51mm munition, it's still in use with the Bundeswehr (now designated MG 3) and other armies of the world.
With its extremely high rate of fire of 1500 rounds/ minute it was both highly effective and well liked by its users. Also because of the high rate of fire it was ideal as an anti aircraft weapon. 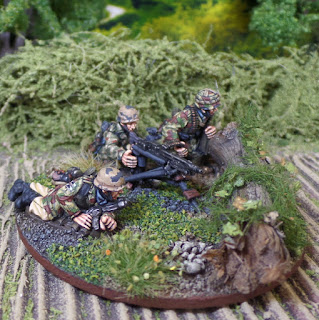 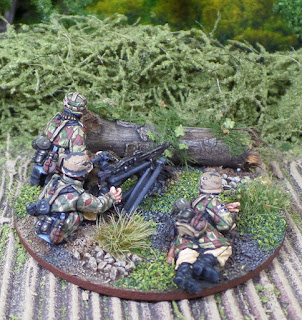 The Sumpftarn as seen on the gunner was more or less the result of some stupid mistake I made.
Some weeks ago Koppi from thrifles.blogspot.de posted a report about his visit to the Oorlogsmuseum in Overloon/ Netherlands. If you only have as much as a slight interest in Fallschirmjäger I recommend you to check out his post. In the post there was the picture below. 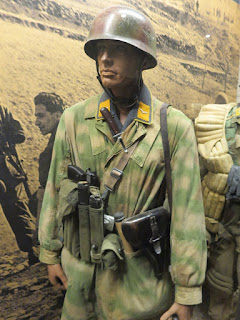 At first the Knochensack looked to me like one of the extremely rare desert Knochensäcke for the Ramcke Brigade to which a green came pattern was applied by airbrush. Happy to have found a camo sheme I wasn't familiar with up to now, I instantly went to work. Figure in hand and mightily proud of what I achieved I later checked back to the relevant blog post only to discover the Smock actually had a very faded swamp pattern camouflage. Well, luckily for me it wasn't all that difficult add the brown splodges and the rain streaks. Actually I'm not at all unhappy to have accidentally discovered a nice method for painting swamp pattern. 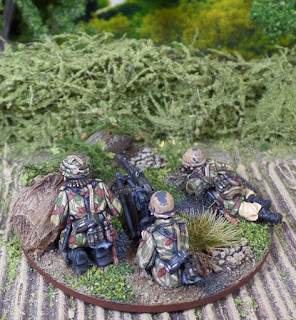 Next is the 'Granatwerfer 34'. I actually already painted one for my early war Heer Germans so I will save us all the bother and won't repeat me here. So if you're interested in a few historical facts you might want to check out this blog post. 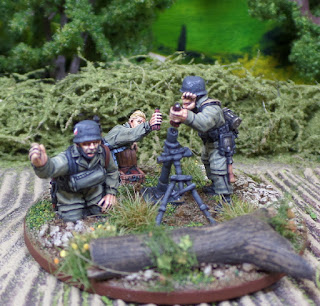 As the figures were all modeled with closed smocks they all got the second issue green smock and full helmet decals so I can field them in early war too, should I feel so. The only thing that really bothers me is the ammo box which was only produced from 1943 onwards. Unfortunately Warlord thought it appropriate to model the wooden box which was only produced from 1943 onwards. 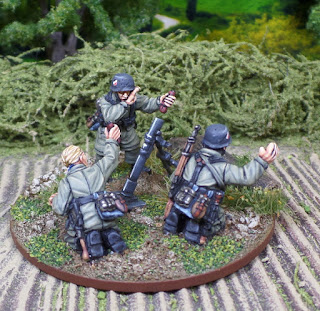 The markings on the mortar are to facilitate easier assembly in combat. I omitted them on the early war Heer model but decided to paint them on here. 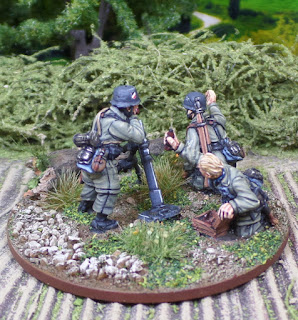 Last for today is the famous Raketenpanzerbüchse 54, probably better known as Panzerschreck (Tank terror) or Ofenrohr (stovepipe). The Panzerschreck was an improved copy of the american made Bazooka of which some were captured for the first time in 1942 in Russia. These were supplied to the Soviet Union under the Lend-Lease agreement. A popular belief is the first Bazookas were captured in Tunisia but some sources indicate otherwise.
The Panzerschreck was first issued in spring 1944 and came in two calibres, i.e. 88mm and 100mm. 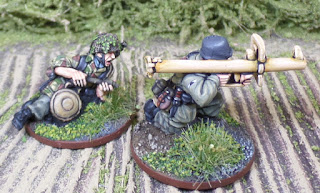 The first batch of Panzerschrecks came without the protective shield, which was later on added to safe the crew from the rockets fiery backwash. Because of the smoke produced when firing this weapon the position of the AT team was easily spotted, thus forcing the soldiers to relocate after each shot. 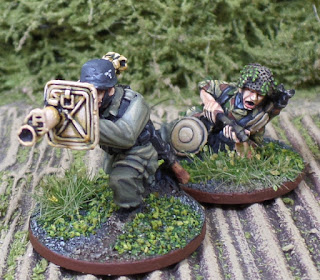 The Raketenpanzerbüchse was able to defeat armor of up to 160mm. Range was better than with the more ubiquitous Panzerfaust but whenever possible the gunner would aim for the weaker side armor. A variant of the weapon was also mounted to the wings of Focke-Wulf 190 fighter planes. 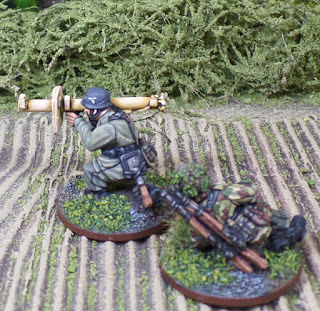 So, enough bushwa for today. Enjoy your sunday and hopefully till next time!