Green Devils on the prowl

As some of my regular followers might remember during last years Analogue Hobbies Painting Challenge I (re-)started an old pet project of mine: Fallschirmjäger.

As it's always the case it has taken me a while to get back to that project but finally I got in gear and added a little something I wanted to do for a long time already.


Ever since I stumbled over the above picture taken in 1942 near Benghasi, Libya (if the caption on beutepanzer.ru is to be trusted) I wanted to have a sPzB 41 auf Gepanzerter MG-Träger Bren 731(e). Granted, there's just the one picture above I'm aware of and most sources I do have at my disposal mention only a single field modified Universal carrier with the sPzB 41. But as sources on field modified vehicles in German service are sketchy at best (especially as the war dragged on) I deemed it possible there having been more than one of these little cuties. 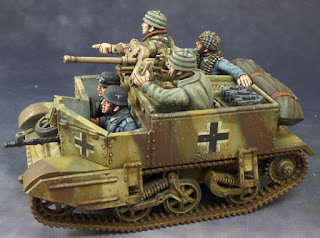 The Wehrmacht captured virtually thousands of Universal Carriers during the campaigns in France, Greece and North Africa. In typical German fashion it also got its own code number. Except for the Scout Carrier variant which got the number 732(e), all different variants of the Universal Carrier were now called "Gepanzerter MG-Träger Bren 731(e)" [armored MG carrier Bren 731 (english)].
As with the Commonwealth forces the 731(e) had to fulfill a whole range of tasks in the Wehrmacht too.

Virtually unmodified they were used as supply vehicles for artillery units as well as tractors for smaller artillery pieces and anti tank-guns. Some were even used as snow ploughs especially on airfields. Others were used as Sicherungsfahrzeuge (security vehicles) for Luftwaffe airfields and other installations as well as in anti Partizan duties in occupied areas, also largely unmodified except for the Bren MG which was in most cases replaced by a German manufactured weapon. 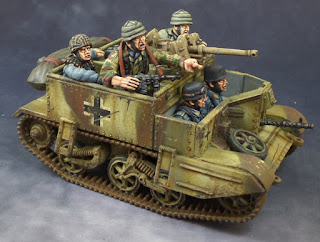 Also there were many modifications using the Bren Carrier as a basis. Various variants including those armed with 3,7cm PaK 36 or 4,7cm PaK(ö), or those fitted with 2cm FlaK 38 and used in the Balkan campaign, were conducted by the "Baukommando Becker" and others.
Later in the war there was a number of so called Panzerzerstörer-Fahrzeuge (tank destroyer vehicles) armed with the Raketenpanzerbüchse 54, better known as Panzerschreck. Contrary to popular believe the Panzerschrecks were mostly fired dismounted as targeting would have been somewhat difficult otherwise. 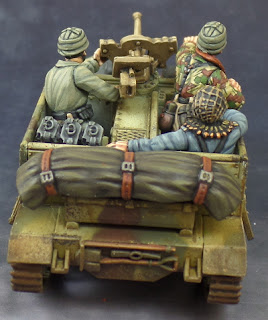 In addition to those 'official' modifications mentioned above there were, of course, quite a number of unofficial field modifications. In most cases these were conducted directly by the maintenance units of the units which captured the equipment.
One of those (probably purely fictitious) field modifications I tried to capture here. For better stability and aiming the 2,8cm schwere Panzerbüchse 41 was mounted on a base plate. The forward facing Bren light machine Gun was replaced by a MG34 and a rack for ammunition storage was fitted to the left half of the passengers compartment. The vehicle was given a proper German camo scheme and the addition of over sized Balkenkreuze to the front and sides should make sure that there'll be (hopefully) not too many friendly fire incidents. 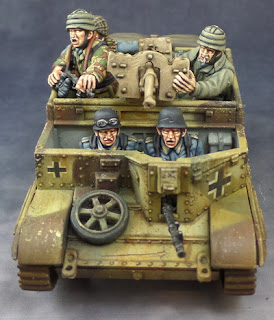 While being somewhat outclassed when it comes to fire power I thought it would fit in with my concept of Fallschirmjäger 'Hit and Run Tactics' perfectly. In Bolt Action terms I'll probably field it with the stats for the SdKfz 250/11. 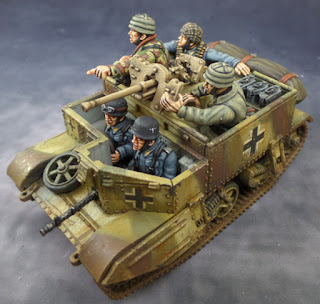 For the Universal Carrier itself I abused the plastic kit made by Warlord Games. Gun and ammunition boxes stem from their SdKfz 251/7C kit. Driver, co-driver/ MG gunner and the relaxed guy in the back are the crew provided with the UC kit. I simply swapped their heads for some from the plastic Fallschirmjäger set from which I also made the two lads in smocks.
The whole idea is based on the "PaK36 auf Bren Carrier" conversion by Matthew Davies.

That's it for now, so enjoy your sunday and till next time!