Having not done any new colour guides for quite a while (and having been prompted to do one specifically for early war Germans by a good friend) I thought I'd use the opportunity and take a few shots while painting my latest unit of Germans.


My painting style is based on the so-called Triad-System or Foundry System in which you use a Shade as the darkest colour. Then you paint over it using what is called a Base Colour (in general the actual colour you want to achieve for the piece you're just painting) leaving the Shade show only in the folds and recesses, followed by a Highlight on the points which will catch the most light. However, I'm using intermediate steps to make the transitions between the different colours much smoother.
Thus typically the steps I use would look somewhat like:


Step 1: Helmet and trousers
This one is rather straight forward as I use basically the same colours for both items only in different mixes. Actually the helmet should be in a very dark greyish green, almost similar to field grey, but  I liked the stark contrast more so went with a dark grey. This and it also looks more teutonic ;-)
Also I went deliberately a little too dark on the trousers, so you may very well start with a lighter shade depending on the look you're after. 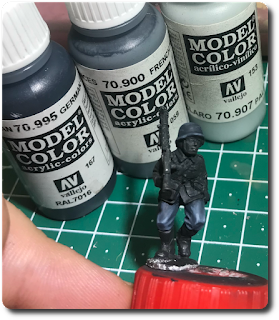 Step 2: M36 Fieldgrey tunic
I've elaborated this particular recipe before but for the sake of simplicity it's included below. What paints to use for the bottle-green collars and shoulder tabs you'll find further below. 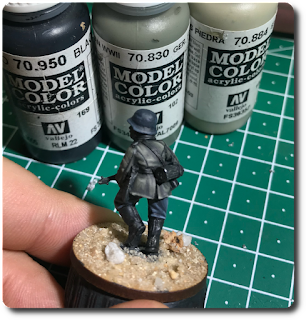 Step 3: M36 Reed-Green tunic
There were a myriad of different shades of Fieldgrey, especially in the late war period, but one I find especially fitting for early war is the so called reed-green. While there was a specific reed-green summer uniform later in the war it's just as appropriate for the M36 field tunic. This is especially the case when considering the early uniforms generally having been on the greener side of the spectrum while later uniforms often were more brownish.
What paints to use for the bottle-green collars and shoulder tabs you'll find further below. 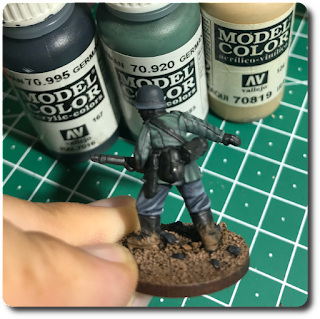 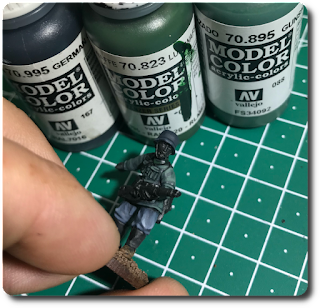 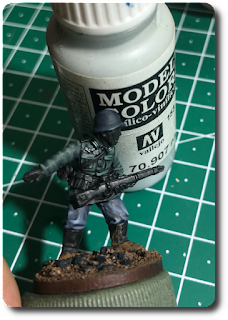 Straight White or Off-White is too stark in my oppinion. Should you choose to hand paint rank chevrons onto the sleeves of your toy soldiers I'd personally first paint on a triangle of

and then paint over the chevrons in Pale Grey Blue. 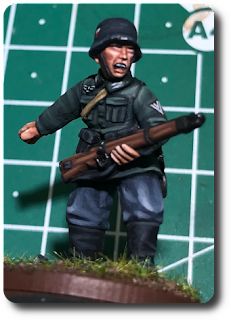 Step 6: A new recipe for Caucasian Flesh
Regular readers of my blog may have noticed a change to the way I paint Caucasian Flesh, especially compared to earlier guides like *here*. This is mainly due to my switch away from Foundry paints and firmly towards Vallejo.
Thus I thought this might be the perfect opportunity to let you know the paints I use nowadays.

I use roughly around seven layers to get the result I'm after, so a fair bit of mixing is required to get the smooth transitions I prefer today. 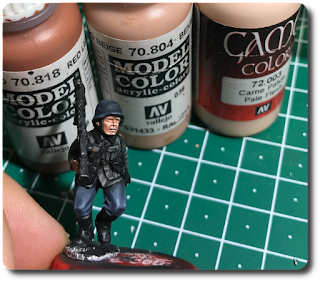 I hope this short guide was of use to some of you. As ever, should there be any questions or you'd want me to do a specific Colour Guide just let me know in the comments below.