At long last the first post of the year. Since before Christmas Eve I'm plagued by a nasty cold that, while having eased off in between just enough to get in a game with mate ChrisS and meet up with some friends, is restricting my painting output severely. Sneezing and coughing all over half painted miniatures all the time isn't exactly my idea of fun, so progress is slow to say the least.

Whining aside, I've actually managed to paint up my submission for the "Millsy's Millpond" location in this years iteration of the infamous Analogue Hobbies Painting Challenge.

With eleven men this squad of jackbooted German Landser is maybe a little on the big side, but an extra rifle man could well come in handy here or there. The figures are from the Wargames Foundry small but excellent range of WW2 Germans sculpted by the Perry twins back in the day. 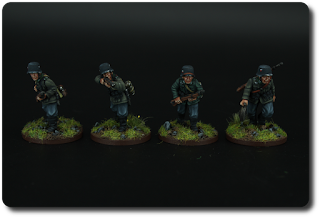 I'm not exactly sure when they were first released but am rather confident that it must have been well before the change of the millenium. Should one of my esteemed followers have some idea as to their exact release date I'd be keen to know. 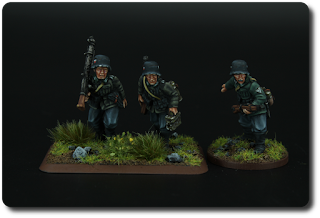 While a tad on the small side when compared with more recent castings I'll happily mix these with the current Warlord Plastics which make up the bulk of my Early War German force. In my humble opinion the sculpts have aged well and the figures were a joy to paint.
I hadn't actually intended to beef out my Germans with Foundry ones but the riflemen were part of a deal for some British Paras I made a while ago while LMG and NCO were purchased recently during the Foundry Christmas sale. Amongst some other bits and bobs, but more of that at a later date... maybe. 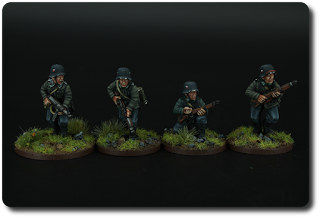