One thing I came to recognize in our last games was the effectiveness of the British 2" mortar when deploying smoke. So I swiftly decided to paint me up another one as a support option. I also needed another two riflemen to bring up all of my four sections to the 11 men required for a 1940 Regulation BEF Platoon. And last but not least, as I'm rather a stickler for WYSIWYG,  a Platoon Sergeant armed with a rifle. All models are Warlord Games.

The famous 2" mortar was developed in the 30's based on a 50mm Spanish model. It was used by the British Army throughout the war and well into the Cold War in several variants, including a shorter version for airborne units. It was well liked by the men and could fire High Explosive rounds, smoke rounds as well as flares. Each of the shells weighed in at roughly 1 kg.

A typical 2" mortar team consisted of two men, i.e. the firer and the loader. Because of its small weight it was highly portable and easy to conceal. It's maximum range was somewhere around the 450 meter mark and it was capable of a rate of fire of about 8 rounds per minute. 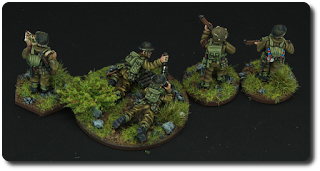