To counter the threat posed by German Panzers I wanted another anti-tank gun to support my BEF. As I already have a QF 2-pounder anti-tank gun my attention turned to another piece fielded by the British at the beginning of World War II: The French made 25mm Hotchkiss anti-tank gun.

The Hotchkiss anti-tank gun, generally known as the canon de 25, was the main anti-tank gun in service with the French army in 1940. About 300 were given to the BEF as they had insufficient numbers of their superb QF 2-pounder gun. According to Wikipedia (I know ^^) the version the British received was the horse drawn version. This presented the BEF with some problems as they were the only fully mechanised army at the start of the war. As a solution the gun was mounted on the flat bed of trucks, a practice widely adopted later on by almost all belligerents as a means of providing anti-tank guns with greater mobility. 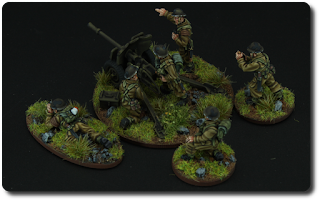 With no model of the British version commercially available I had to use the French version provided by Warlord Games with some British crew. I couldn't be arsed to paint up a truck to go with the gun though, so it has probably been dismounted for better concealment in an ambush on some unsuspecting German column.