For our ongoing 'There Are Many Rivers To Cross' campaign mate Chris (aka Axebreaker from christopher-bunkerhill.blogspot.com) wanted a Leichtes Infanteriegeschütz 18 to give him some additional punch against infantry. While not particularly keen on having to face that rather nasty piece of equipment I quite like the look of that stubby nosed little gun. So I set to work on the Early War model of the gun by Warlord Games. That said both gun and figures would be perfectly suitable for the entire conflict. Only the gunner on the left of the gun is a figure from the PaK 38 set by Perry Miniatures with a spare head from Warlord. 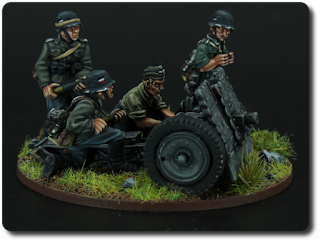 The 7,5cm leichtes Infanteriegeschütz 18 was introduced into the Reichswehr in 1932. Due to its short barrel it had a relatively short range of just some 3.4 kilometers but was well liked by its crews thanks to its good accuracy and reliability. At first it saw service in the Infanteriegeschützkompanien (infantry gun companies) of Infantry and Schützen regiments. Later it was also introduced into the heavy companies of Panzergrenadier companys. Due to it being an integral part of a Infantry Regiment the Waffenfarbe (arms of service colour) was the white of the infantry and not the red of the artillery. 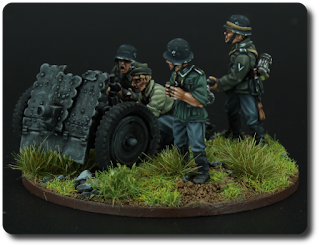 The gun served throughout the war and there were also attempts to develop a version for the Fallschirmjäger but these were abandoned after just eight prototypes in favour of the 7,5cm Leichtgeschütz 40. 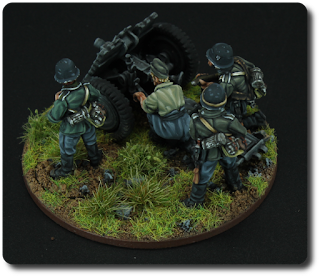