One option for a German force in the 1940 Blitzkrieg handbook for Chain of Command is the use of the iconic WW1 vintage MG08/15 for lower quality troops. As there's currently no manufacturer out there doing Wehrmacht figures armed with that venerable piece of equipment I had to resort to WW1 Germans from Renegade Miniatures. Great War Miniatures also offer a set with beautifully sculpted MG08/15's with crew but these are unfortunately sporting putties instead of jackboots unlike the Renegade ones. So being neither skilled nor patient enough to pull of greater works of conversion I settled on the Renegade figures. They received simple head swaps and most of their telltale WW1 equipment was filed off and replaced by bits from various plastic German sprues by Warlord Games. Good enough for gaming purposes.

The MG  08/15 was a development of the MG 08, the German derivate of the famous and ubiquitous Maxim machine gun. The MG 08/15 was intended to be used in a light machine gun role like the British Lewis gun. But unlike its British counter part it was still relatively heavy, weighing in at 19,5 kg and thus barely suited for its intended role. Still about 130.000 pieces were produced during the Great War making it the most numerous German made automatic weapon by then. In fact it was regarded as so ubiquitous an item that even today we Germans tend to say something is "0815" (spoken as nullachtfuenfzehn) when we think it's absolutely ordinary.

After the war the MG 08/15 was also used by Reichswehr and the Wehrmacht. It was gradually replaced in active units with the beginning of the arrival of the MG 34 in 1936. I've not come across any sources indicating their use during the Polish campaign but it definitely saw service during the 1940 Blitzkrieg in France. It was used mostly by lower quality troops as well as static troops on the Westwall. But even in 1941 there were several reserve units on the Eastern Front still equipped with the MG 08/15. Also late in 1944, early '45 it was dragged out of storage again to equip the various Volkssturm formations during the Reichs last death throws. 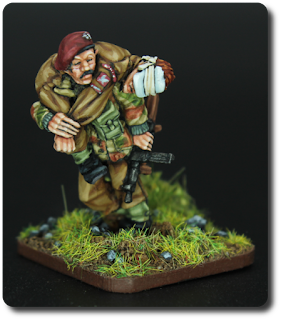 A figure I wanted to paint for a while now was the "limited" Para figure which came with the first version of the Bolt Action rulebook when ordering directly from Warlord Games. It's modeled by that absolute genius Mr. Hicks and it was only recently I was able to track one down. Actually is was gifted to me by a member of the German Sweetwater Forum.  I haven't done much work on my Para force lately but with a Arnhem supplement for Chain of Command on the horizon I might actually rectify this sad state of affairs. I certainly enjoyed painting these little fellas quite a bit. 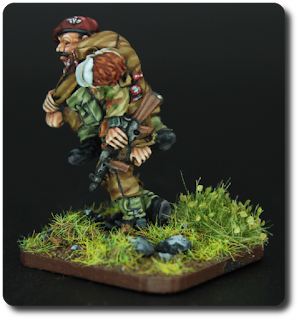 Thanks for popping by and till next time!