This "beast" has taken me quite a while. Several changes in real life (tm) and a general lack of hobby MoJo kept getting in the way of its completion but now it's finished I'm rather chuffed with how it turned out.

The tank itself is by Warlord Games with some stowage made from Green Stuff and from Rubicon Models and Tamiya. The tank commander was sourced from Perry Miniatures. 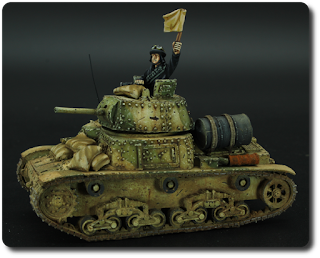 The Carro Armato M13/40 was developed as a medium tank (the M in its name stands for "Medium"), albeit  being better comparable to the light tanks of the period. It was intended as a successor to the M11/39 with which it shared an almost identical lower hull section with slightly improved armour. It was first deployed in the ill fated attack on Greece and the fighting in North Africa. While not a bad tank when it was introduced it soon became obsolete due to the riveted construction, its relatively low speed and the inability to be equipped with a bigger gun. 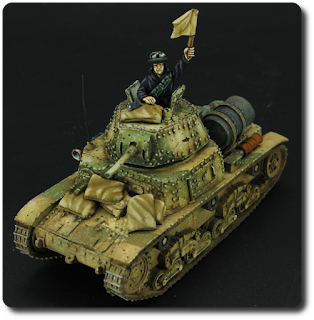 The M13/40 was never deployed to the Soviet Union with the bulk of the production being shipped to  North Africa and a few sent to the Balkans. They were also not employed in the defense of Sicily during Operation Husky. After the Italian surrender some M13/40 and its successors, the M14/41 as well as the M15/42 - only a hand full of the latter saw limited use by the Italians against German forces around Rome in 1943 - were used by the Germans in Yugoslavia and mainland Italy mainly in an anti-partisan role. 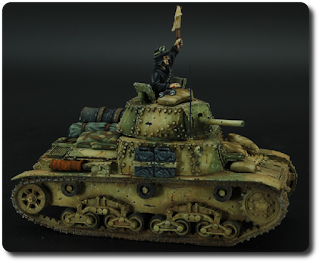 As it is this iconic tank is of little use for my Italian project as I'm centering my efforts mainly around Sicily and Operation Husky. But who knows? It might see use against Italys former allies in the defense of Rome, or I might at some point even start a project set in North Africa or the fighting in the Tunisian bridgehead. 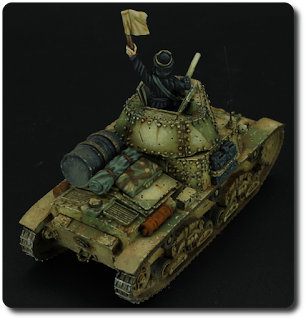 Last but not least a little advertisement:

A tutorial about how I went about painting this little beauty will also feature, along with a painting guide on Italian uniforms, in the upcoming book Setting The Scene Volume 2 - Creating a wargames layout for the mediterranean by wargaming celebrity and fellow blogger Pat Smith.
The book will be self published by Pat Smith and Steven Lampon, so should you fancy getting yourself a copy follow the link provided above. There you'll find the details on how to order as well as some sample pages of what you might expect in the new book.
Also for all those who missed out on the first book Setting The Scene - Winter Wargaming you can sign up for this one as well. As soon as there's enough interest there'll be a reprint.

That's it for today. Thanks for the visit and till next time!