Despite their use in France in 1940 for some inexplicable reason there's no entry for the famous Bofors 40mm anti-aircraft autocannon in the Blitzkrieg 1940 handbook for Chain of Command. Still I rather fancied to get me a model of this iconic gun for quite a while already. And even if it's just as an off-board marker for having purchased an AA-asset. Now having recently ordered some reinforcements for my BEF from Warlord Games I included their version of the Bofors gun as it was in use in 1940. Well, the kit has some issues, especially where historical accuracy is concerned, for example the NCO is carrying the later P-37 entrenching tool, but still is rather nice all round. 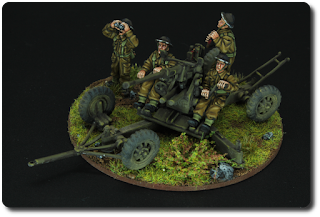 The Bofors gun was designed in the early 1930's by Swedish arms manufacturer AB Bofors as an anti-aircraft gun and was capable of a rather impressive theoretical rate of 120 to 130 rounds per minute. It's effective range was about 3800m with a maximum range of some 7000m. The Bofors was sold abroad and many forces of the time used it to equip improve their AA capability. Britain purchased production licenses for the Bofors gun and the first British made examples of the gun were delivered to the Army in June 1939. 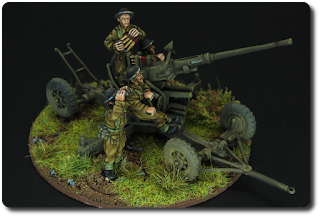 The Bofors was employed in the Norwegian campaign where a significant number of the 72 guns sent there were lost to the Germans. The gun was also sent to France alongside the British Expeditionary Forces and again about 100 had to be left behind when the BEF was evacuated. The loss of these guns was felt heavily during the "Blitz" but increasing production rates soon made more than up for those previous losses. 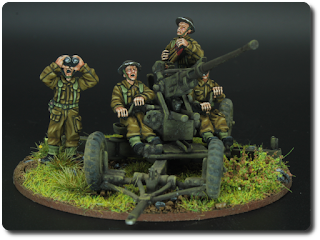 The Bofors was used throughout WW2 and still is used up to this day by some armies. The US Air Force for example employs it as part of the armament on their AC-130U Spooky II gunships. Those gunships still fly combat missions and while there were several trials to replace the aging Bofors none proofed satisfactory. Thus after almost 90 years since its development the original L60 Bofors still remains in the arsenals of the most sophisticated military of the world. 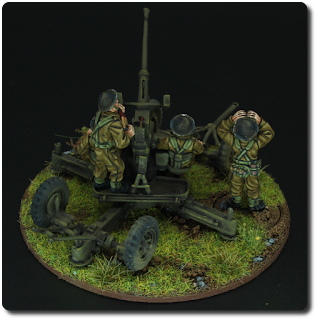 That's it for today. Thanks for stopping by and till next time!