After Chris and I still are continuing our "Dux Britanniarum" Campaign we had another game last week.
(Pics will follow shortly...I hope^^)
To anticipate some events a bit, during the battle I lost my two nobles and the champion. The champion was in fact killed during the pre-game phase as Christophers champion 'Wolfhead' challenged 'Gildas' and as a result of a fierce fight he killed him... well, 'Gildas' didn't even deal a scratch to 'Wolfhead' but he was courageous till the end.

During the following battle my first noble 'Eckfrith ap Ynys' called the Bastard and his compagnion 'Eliffer' also known as 'Dungbreath' were killed also. This left my leader facing the saxon onslaught on his own and so he decided to leave the field of dishonour to fight amother day.

This result left me with a tough decision. Wether to play on with my 'killed' nobles or follow the spirit of a campaign and recruit (read paint) new ones.
As I grew somewhat acusomized to 'Dungbreath' I decided to let him life. I think he pretended beeing killed during some hand to hand combat and crushed down between the actually killed. Later the night he shambled into the british camp telling a crude story of a severe blow to the head (a minor scratch was visible at his forehead) and how he escaped the looting saxons. So he was promoted to first noble.

Now what happened to the 'Gildas' the champion and 'Eliffer' you may ask? Well, I'm pretty sure Christophers champion 'Wolfhead' knows his job so 'Gildas' remnants were gathered after the battle and burned to enable his soul to join his ancestors. Despite nothing of 'Eliffer' was ever found he is to be believed beeing killed just as he saved 'Theodosius's' (My Leader) life. It's perfectly possible that the saxons, despite beeing a bunch of dirty dogs, acknowledged his bravery and (after having stripped his corpse from everything valuable) burried him.

So I urgently needed a new champion and a new second noble. And here they are!

May I introduce to you Flavius Pulcher (Second Noble) and Turpiculus Ater (Champion):
Flavius Pulcher (lat.: Flavius: Blonde/ Blonde: handsome) is the former squire of 'Theodosius' and now one of his Equites. He proved himself during many battles and is liked by his men. Unfortunately he thinks no end of himself and it may happen that he leaves the battlefield just because his tunic got dirty. Beeing Short and wiry he is aged just 20 years old and known as beeing overly Lustful what made him many enemys in the kings household. Beeing just the son of a honestiore and because of his age he hasn't had a chance yet to gain any noteworthy reputation. 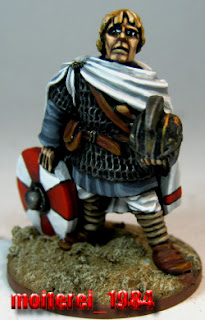 Turpiculus Ater (lat.: Turpiculus: extremely ugly, Ater: deep black) is told to be the son of a saxon king from over the sea. Some say his father was slain by 'Hamarolf' more commonly known as the 'Battler', who afterwards sold him off to the infamous pirates of the baltic sea. After years of hardship he had earned the trust of his captors and so they introduced him tinto their brotherhood.
Many years and lots of plunder later he decided he had learnt all he needed to know and now was skilled enough in using his sword, so he killed his former captpors and later companions and went of on a task to find his nemesis 'Hamarolf'. Month of investigation have led him to a small kingdom in southern Britain which was in desperate need of trained swordsmen because 'Hamarolf' and his missled followers were trying to carve out their own kingdom on british soil. He quickly gained the trust of 'Theodosius' and after the crushing defeat at Parvumoppidum in which 'Theodosius's' champion was killed he became his personal bodyguard. 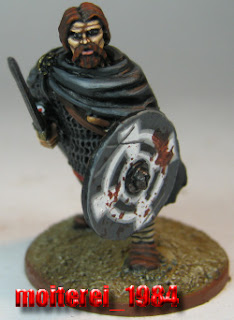 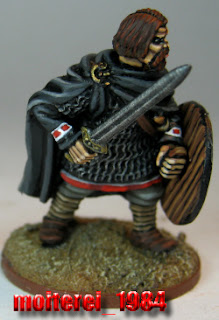 Most of the time he dresses his Tall and Strong stature in deep black cloth. Theodosius's men are to such an extent frightened by his appearance that they call him the Executioner. As a Master of Arms he is feared by the enemy also. Nobody, not even the man himself, knows his exact age but it is said he must be about 28. Beeing in Exile now for almost all of his life only 'Hamarolf' could tell Ater about his ancestors.


I hope you enjoyed this little excurse into the lifes of my new Nobles and as I said before I promis you'll soon see some pictures how all this could happen.
Creating the new characters was lots of fun as I tried to catch the results of the dice rolls in the miniatures themselves.

Miniatures are from the exquisite Westwind Miniatures range of Arthurian figures again.
Bases are still to be finished. Both shields are handpainted.