Having only recently finished the T-26 tank I felt the urgent need to continue with the SCW theme. After all the miniatures are just superb. For quite a while already I had a hankering to do an artillery piece. These don't really feature in Chain of Command due to their range, but I figured I could get away with using it as a stand in for a PaK. After all both sides used their artillery in a direct firing role if the need arose. 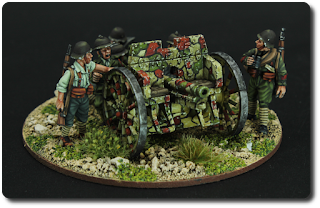 Having had a 7,7cm Feldkanone 96 n.A. from Renegade Miniatures WW1 range lingering in the lead pile for way too long already, I thought it might be just what I was looking for. According to "Armas y Uniformas de la Guerra Civil española"  by Lucas Molino Franco (I wonder if there is a relationship?) and José María Manrique García some 104 of these outdated guns were delivered to Spain by Nazi Germany.  Four of which came with the Legion Condor while the rest was provided through HISMA / ROWAK. According to Molino those guns arrived in Spain only late in December 1938 and thus could not be used during the Battle of the Ebro. But despite their age and insufficiencies they were nonetheless welcome as they helped to ease the strain on the larger calibre guns of the Rebels. 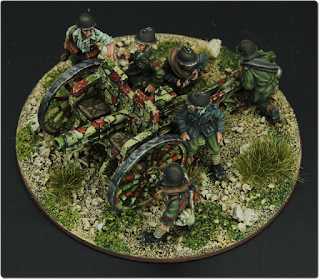 The 7,7cm Feldkanone 96 neuer Art as was its official name was introduced in 1904 as an upgrade, actually almost a complete redesign, of the even older 7,7cm Feldkanone 96. It combined the barrel of the latter with a new carriage, a new breech and above all a modern recoil system. It was lighter than both the French 75mm Schneider or the British QF 18 pounder guns but with a shorter range. In the opening days of World War 1 its higher mobility made it an highly praised asset in the swift advances through northern France. But once the sweeping maneuvers of August and September 1914 degenerated into the stalemate which came to symbolize the Great War, its deficiencies became all too apparent. Thus in 1916 it was upgraded again to become the 7,7cm Feldkanone 16. The 7,7cm Feldkanone (of both vintages) was one of the few artillery pieces the Germans were allowed to retain after the treaty of Versailles. Most guns were re-barreled to accept the new standard 75mm ammunition and soldiered on virtually to the end of WW2. 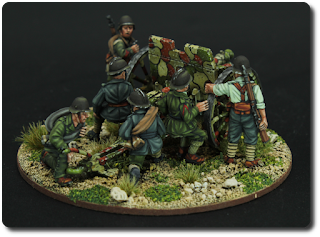 I'm not sure if the guns delivered to Spain were re-barrelled ones or if they simply were a few old dogs dragged out of storage to be disposed of in Spain. For this piece here I decided on the latter and to further enhance the impression of old equipment I went for a camouflage pattern as it was common during the Great War. Crew were sourced from different sets in Empress Miniatures vast range of Spanish Civil War Miniatures, chiefly from Republican and Nationalist AT-gun sets and the Italian 75/27 gun. 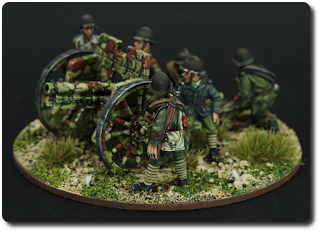 I'm still looking for some ammunition boxes to decorate the base but might just as well look out for a limber.
So, that's it for today. Stay safe and have a nice weekend!