Back to the Great War 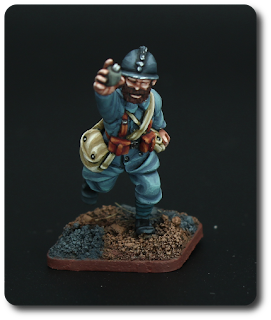 Another year, another Analogue Hobbies Painting Challenge (The ninth so far and and the 6th I'm taking part in) and yet another project. A little more than 100 years ago World War I, or the Great War as it is also known, ended after claiming the lives of millions of soldiers and civilians alike. The tragedy of the whole conflict, especially on the western front, is in my opinion perfectly epitomised by the quote with which I started this post. Translated into English it reads like:

"I refuse to tolerate the word Operation. We simply punch a hole into it [i.e. the front]. Then we'll see about the rest. That's just how we did it in Russia too."
-Quartermaster General Ludendorff-


Ludendorff made the comment in the spring of 1918 when asked for the strategic conceptions and aims for Operation Michael, the German spring offensive meant to encircle and break the British Expeditionary Force and thus ending the war. Germany by than was on its last leg and the offensive was seen as the last chance to come to a victorious conclusion after four years of all out war.


The quote shows the complete disregard of (not only) the German High Command with which it spent the lives of its soldiers without really having a clue as to how to break the deadlock in the first place. And if, by some miracle, the breakthrough actually happened, how to exploit it. 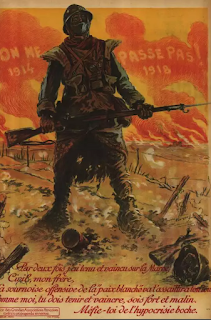 The famous phrase "On ne passe pas!" (They shall not pass!), which probably is better known in its Spanish Civil War iteration "¡No pasarán!", was coined when the Germans actually threatened to break through on the Marne for a second time after 1914. And while coming close to actually break the backbone of the BEF the Germans were actually stopped. 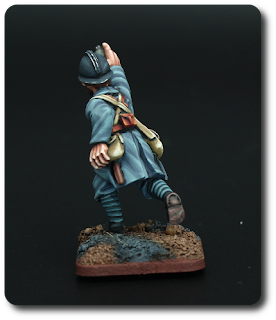 Some might remember my first tentative steps into WW1 from a few years back. The project never really got off the ground, thus I hope to breath new life into it during this challenge. Other than in my earlier efforts I'll mainly focus on the Western Front but may stray into other theatres as well. For a start I've ordered a whole bunch of Woodbine Designs French and am currently thinking of maybe adding some Brigade Games French to the mix.

I'm not completely decided on the basing yet, thus I shamelessly borrowed a method used by our very own Sidney Roundwood which he used on his Great War project.

Theme of the first Bonus Round of this years AHPC was Reconnaissance. Honestly I was a little dumb struck as to what to paint for this. There were no suitable vehicles in my stash, nor was I aware of any figures really fitting the theme. But when I came across a pack of German Uhlans from Great War Miniatures, buried deep down in my pile, also known as the Bermuda Triangle of lead, I knew what to do. I also discovered a personal link to the Bavarian Uhlans, but more on that later. 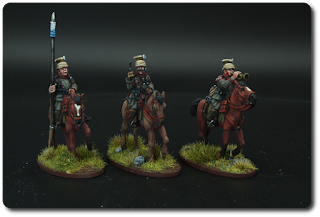 In World War 1 Bavaria fielded two regiments of Uhlans, light cavalry used for reconnaissance and to exploit any potential breakthroughs in the enemy lines. Still armed with saber and lance in addition to their carbines they were admittedly somewhat out of date for the kind of warfare prevalent in the Great War. But the Germans were not alone in this and light (as well as heavy) cavalry formations were fielded by all major combatants. 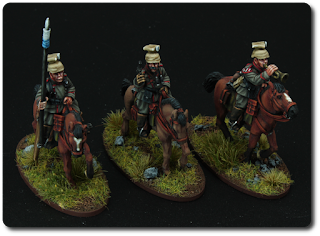 1st and 2nd Royal Bavarian Uhlans were first deployed on the western front but were transferred to the east in 1915 when it was clear that the stalemate in the west would not be broken any time soon.

There they formed part of the Bavarian Cavalry Division stationed at Kelmé. The Uhlans distinguished themselves during the capture of Salakas in Lithuania in September 1915.
Between the end of 1915 and February 1918 the Uhlans fought dismounted primarily on the Stokhid front. From February 1918 on both Regiments took part in the occupation of Ukraine and saw some fighting mostly against the Bolsheviks. In April captured Russian horses were used to make both units fully mounted again. In May the Uhlans took part in the capture of Rostov-on-Don with following police duties in the south of Kiev.

In October and November of that year they then were part of the occupational forces on the Krim, from where they started their long march home following the news of the outbreak of Revolution in Germany. On 8th January 1919, almost two months after the armistice, they fought their last encounter near Zaslaw in Poland against semi regular polish troops. 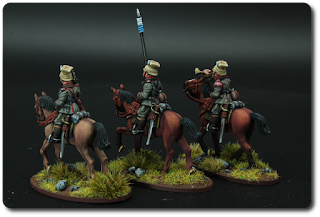 Now to my personal link to the Bavarian Uhlans. During a recent trip to Greece with my Dad he told me that my Great-Grandfather on his side of the family was part of either the 1st or 2nd Royal Bavarian Uhlan Regiment. If he was actually an Uhlan or part of the train of one of the regiments is unknown. But personally I think probably the latter as family history has it he went to war with his farm horse and also came back with it, of which feat he was immensely proud. Other than that little is known but my Dad gave to me, as part of a welcoming gift in our new house, the wooden army box of a Russian officer my ancestor had brought with him when he returned home.

I'm absolutely proud of that new addition to my collection and at the moment it's used to house parts of my lead stash. 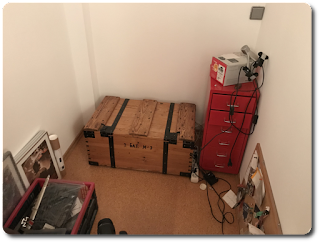 Now, that's all for the moment. I somehow don't really feel like painting right now, so I might actually try and make some terrain. We'll see. See you next time and stay safe!