It's been a few days since my last post. Work and private issues have come in the way of either blogging as well as painting. Actually I still don't really feel like wielding a brush, but at least I've managed to get a few figures done I had standing around half finished for a while. As for blogging it actually felt good taking a break away from it for several weeks. It can be such a drain on already sparse free time that I felt I'd need to readjust my priorities.
But enough of that now. On to the miniatures!

The early war supplement for Chain of Command Blitzkrieg 1940 has the MG08 as a support choice for higher wave troops (3rd wave upwards) and as such I of course had to get me one. As with a lot of other obscure gear there's unfortunately no one out there producing one with the appropriate uniforms for WW2 and thus I had to make do with a WW1 one from Renegade Miniatures. I really would have preferred using the one from Great War Miniatures as the sculpting is so much better, but as I suck at sculpting and the Renegade figures already sported jackboots instead of puttees and as they're prone anyway less conversion was needed. Almost all I did was to remove the cast on gear and replace it with spare parts from from the bits box. Last a prone Russian figure was pressed into service as a NCO for the machine gun. 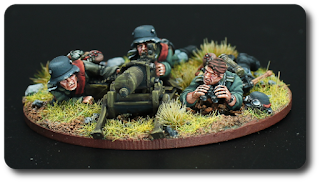 The MG08 was the standard machine gun of the Imperial Army in WW1 as well as that of the Reichswehr during the inter war period. It was superseded when the MG34 was generally issued in 1936. But it was still in use with lower quality troops at the start of the war. Again, when Germanys enemies were closing in on its border, ready to deliver the knock out blow, the MG08 was dragged out of storage and issued to Volkssturm units formed in a desperate bid to stop the oncoming tide in the east and the west. 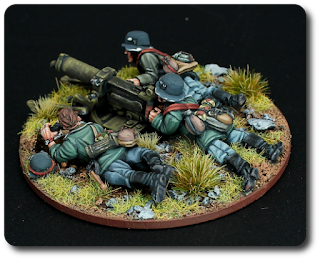 The fourth and for now last squad for my early war German force was built again using Warlord Games' excellent plastic Blitzkrieg Infantry but this time bits from other kits were used as well. This allowed for more variety in poses for little effort. 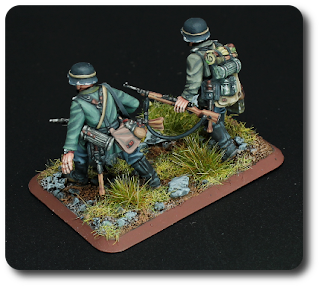 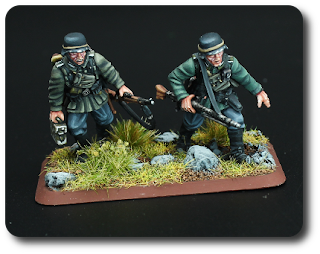 One thing I tried was to built a few more guys carrying ammunition than I'd actually need for this squad in order to distribute them out to my other squads which as of yet lacked the third crewman for the lMg teams. I should have put these figures on square bases in order to distinguish them from regular rifle men, but unfortunately only realized that when it was too late. I certainly can't be arsed to rebase them only hours after their completion. 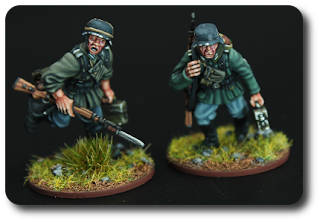 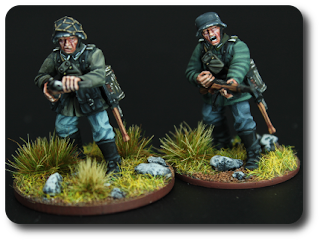 While only barely visible on this photo the NCO has a Bergmann MP28, a direct descendant of the first ever machine pistol in mass production. It's one of these useful metal parts which come with the Pioniers box and certainly adds to the early war vibe of these guys. Unfortunately Warlord Games didn't provide appropriate ammo pouches, thus I had to scratch these from some map cases from their plastic Russian Infantry set. 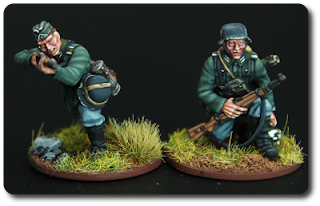 Whilst I type this the Annual Analogue Hobbies Painting Challenge is well underway already. As a long time participant (This being my 5th challenge thus far) I simply couldn't stand aside. So head over and follow me and the other participants painting our way through the lead pile over the coming months. In true fashion I've also embarked on a new project I try to get a kickstart on during the challenge. More on that at a later date.

Till then have a Merry Christmas, enjoy the holidays and above all stay save!