It's almost been a month since my last entry, which is a shame as I had the miniatures for this submission sitting almost finished on my desk, for the best part of two weeks.
Real life got in the way and thus I only came round to take pictures this week. 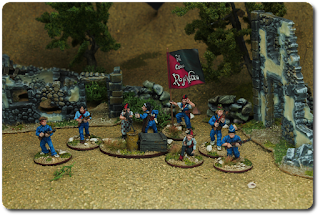 These eight pugnacious ladies are, of course, from the excellent Spanish Civi War range by Empress Miniatures. You'll find quite a few iterations of these figures on this very blog, thus I thought it high time to have a crack at them myself. 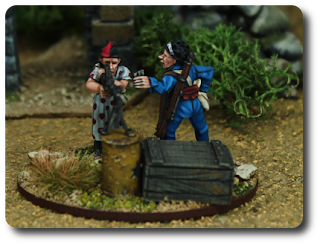 In 1936 many young (and some more elderly) women decided to take up arms in order to defend theRepublic against the fascist rebellion led by General Franco. These courageous women joined the ranks of the various militia units and fought and died alongside their male comrades.
After the shock of the initial months of the war wore off, many of these women found themselves transferred to rear echelon units. Some, no doubt male, members of the republican leadership obviously deeming it unsuitable for women to fight. Of course most of the milicianas strongly detested this recall from frontline service, which they saw as a step back from the gains in, to use a more modern term here, gender equality.
Nonetheless women still played a vital part in the republican propaganda. 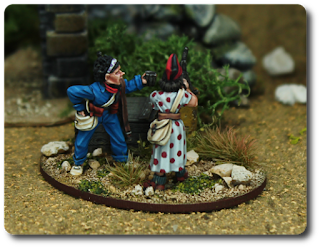 First I wanted to go down the route of reason and paint up my milicianas as part of a communist militian unit like the UHP in order to field them alongside my International Brigades.
But it only took a little mulling over the matter to decide it would be much more 'flashy' to let them sport the red/ black colours of the Anarchists. And looking at the standard bearer below I'm sure you'll agree it was the right decision. After all, who's to stop me from painting up a whole anarchist militia force to support these fine ladies? 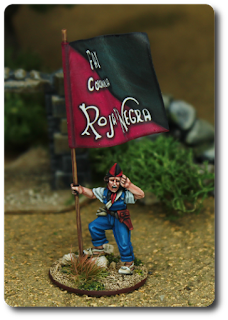 While speaking of strong women in the Spanish Civil War we may not forget German born photographer Gerda Taro. She was probably the first female 'embedded' war photographer and certainly the first to die in that capacity. Sadly today she's mostly forgotten and if remembered at all than mostly for her being the partner of Robert Capa. 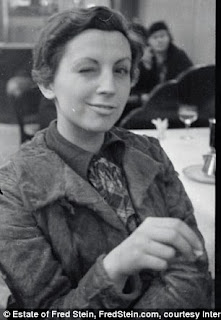 The figure below clearly is inspired by one of her more famous photographs, even if some detail was changed unfortunately. I would have preferred for the sculpt to be as close to the original as possible.
I imagine her to be the daughter of some wealthy aristocrat who ran away to fight for her youthful ideals. 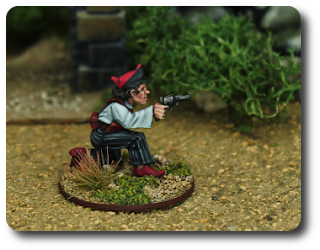 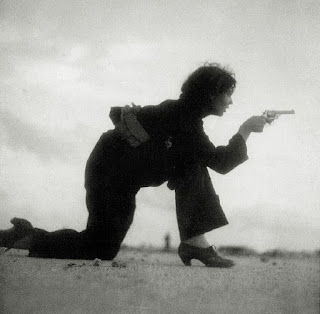 Regrettably the female miniatures in this post are all that are available through Empress. To flash out the ranks a little further I'm currently thinking about getting me some of the "Women of the Home Front" by Bad Squiddo Games. When painted accordingly they should fit in rather well I hope. 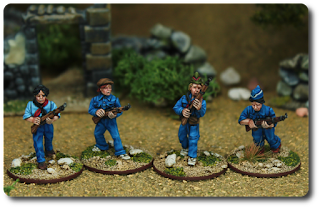 Now back to the more mundane things in wargaming, i.e. male miniatures.
First off are three minor conversions I did using miniatures from other ranges. I'm not sure from whom the first one is but he's been a journalist or the like until kitted out with rifle and helmet. The second one was a WW1 British officer from Great War Miniatures. Last in the row is a former bankster by Footsore Miniatures. Both were simple head swaps to make them fit the setting.
The bankster will travel to Canada in the forseeable future as my nod towards Curt for taking up the SCW challenge this year again, albeit failing miserably it seems ;-) 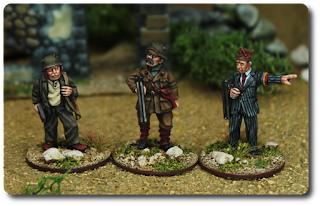 Seven more milicianos than form the rest of my submission for this week. First time I tried to paint cord fabric and frankly I quite like the look of it. Gives the miniatures a distinctive 1930's look I think. 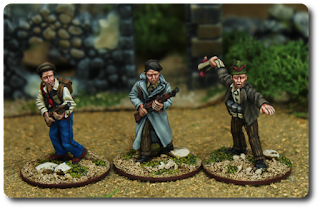 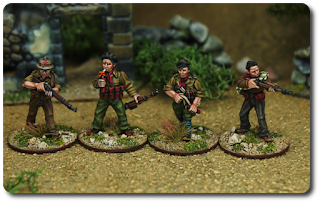 This blog post sees me finishing a playable force for the SCW supplement for Chain of Command, which has recently become our rule set of choice for anything 20th century. That's it for now. Next time I'll probably be back with something WW2... I hope.