Today I added the finishing touches to my German Kradschützen Squad. These were sitting in my drawer for some time now but somehow I always found another excuse why I had to paint up something else before.

While I'm over all quite pleased with how they came out I really hated putting them together. The arms of the drivers somehow never seemed to fit and quite a lot of sanding, twisting and green stuff were needed... and still some of them look off on closer inspection. 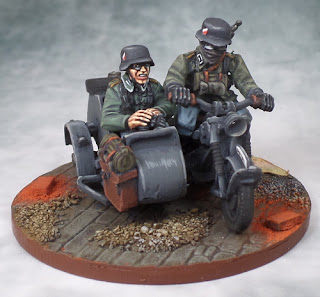 Added to this I managed to throw down one of the Krads with Beiwagen just after having finished the painting. Well... of course it shattered to pieces and I had to do major repair and repaint work. 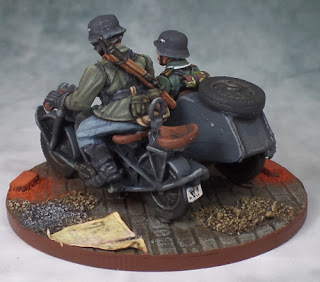 For the first time I experimented with printed out propaganda posters and news papers to add a little more interest to the bases. Still need some other clutter to throw in in order to make it really look like the remains of an bombed out town or the like. 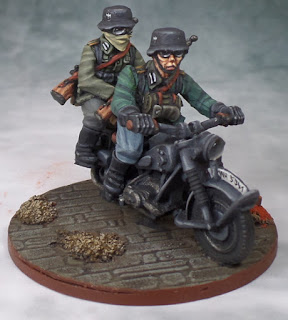 Honestly I really planned on adding at least 2-3 squads of Kradschützen to my Blitzkrieg force as I absolutely love how they look on the table and besides is there anything more iconic to the early stages of the war than some Kradschützen? But after the pain they were to put together I decided to wait for someone doing them in plastic one day... maybe. 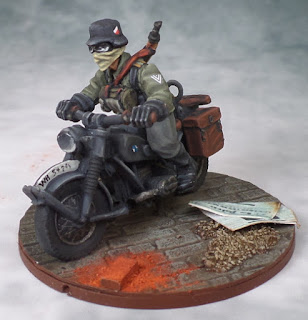 Don't know how they'll fare in a game of Bolt Action yet but at least they're off the table now and as I'm probably loosing anyway it really doesn't matter how my troops perform as long as they do look cool. 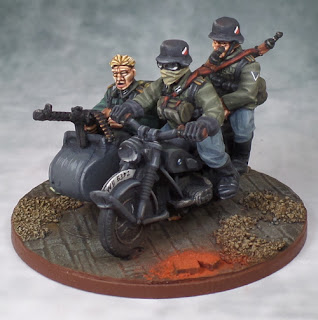 The rank and helmet insignia again are decals from Warlord Games. At some point I want to add dismounted versions of these guys but I think this can wait a little longer. 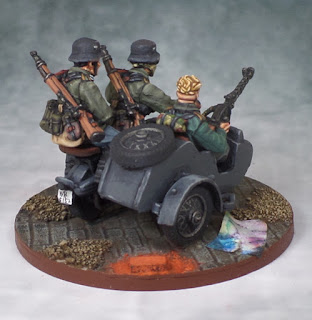 So that's it for the moment! I hope you enjoyed and have a nice week.