Progress at last! These guys were sitting on my painting table for the better part of two months and finally they're done. Somehow a combination of the almost unbearable heat here, listlessness and painting blockade conspired against me to get these buggers off the table. 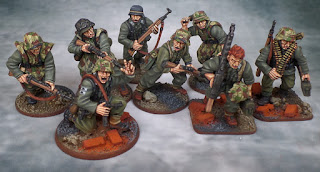 Sometimes it feels like Late War Germans are the Napoleonics among all the other WW2 armies. Lots of different uniform shades, camo and an eclectic mix of equipment parts make them a rather difficult force to paint. 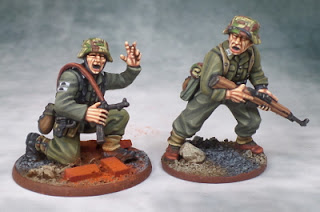 Don't get me wrong these new Warlord Games plastic Grenadiers are great figures and may well be one of their best sets produced todate. 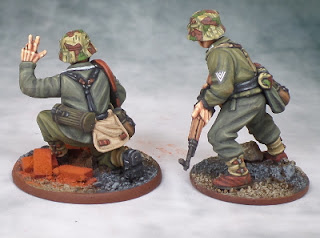 For my liking there's a little too much Zeltbahn and other camo stuff on these guys and I would have prefered if at least one or two of the poses would have had the high shaft marching boots so iconic for German Landsers. Also because of their distinct M43 and M44 tunics these are more or less only really suited for the closing  6 to 8 months of WW2.


So Warlord now have a set of Blitzkrieg Infantry (because of the gas plane pouch) only suited for 1939 to the summer of 1941 and a set of Grenadiers for the summer of 1944 to the surrender in May 1945. What's with those mere three years in between I ask? Somehow I guess there will probably be another set covering that time span at some point as Germans always sell... or at least it looks like. I wish the would have left the darn gas plane pouch off their Blitzkrieg figures so they could be used throughout the whole war without too much of a stretch. I know I'm a little bit picky about such things on my WW2 stuff. Somehow in other periods I don't care that much about accuracy. 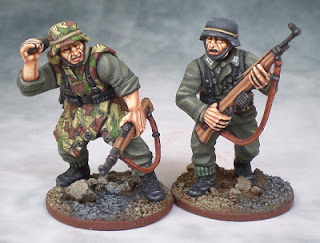 One thing I really like though is the rifle slings on almost all of the rifles. It really adds to the overall look of the figures. Another nice thing is the set beeing mixable quite well with bits and pieces from the Blitzkrieg set allowing for even more variation. 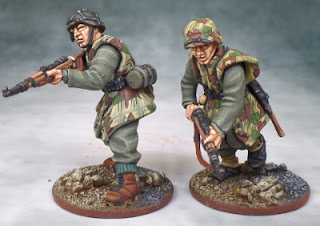 For the moment I have enough of Late War Germans so I'll probably go back to my Early War stuff or for something completely different. Don't know yet. 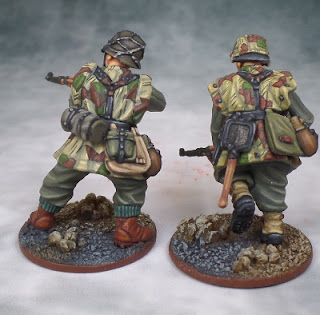 So that's it for today. Have a nice week!