Recently I mentioned a secret project I'm working on and now is time to show it off. Inspired by Curts amazing "Great War in Greyscale" project as well as his take on the "First Indochina War" I decided to combine both projects into one. But what was still missing was the impetus to get going.

Then Curt sent me Major LaBossiere and his batman as part of a small figure exchange and now under the watchful eyes of the good Major (Thank you again Mr. Campbell) I sat to work. 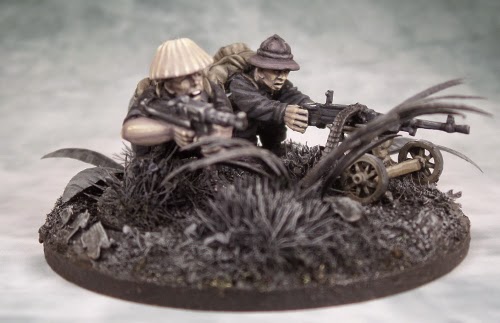 First I was pondering for quite some time what side of the conflict to buy first but as a true wargamer I soon realised I had to have them both. So I contacted Christian at Redstar Miniatures and we arranged for an immediate exchange of war material against some cash. Here I want to take the chance to note their excellent customer service. Not only was I given a generous discount but also free shipping for a part of the order beeing out of stock at that date and the parcel arrived within a few days. So it was by far cheaper for me to order from Redstar directly instead of ordering from Empress who, despite some great ranges they offer, are charging ridiculous prices for some of their stuff especially for customers outside the UK. 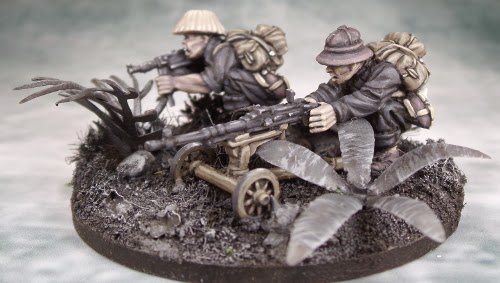 The figures are sculpted by the well known and highly prolific Mr. Hicks (Is there a period he isn't doing?) and to my eyes are the best he produced today. There's so many lovely detail in these figures it's amazing. What I like most is the weapon teams coming in sets of two. So when buying the SG43 MMG team pictured in this post, you get actually two variants of the same figures. One moving and one firing. The same is true of the other heavy weapons teams like the mortars of both sides. 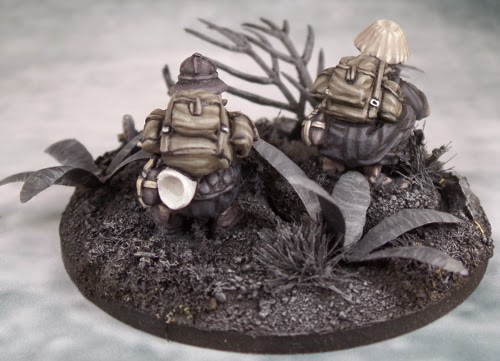 With the miniatures at hand the next problem arose as to what side to start with.Except for an attempt at two DUST Tactics figures I haven't really tried the whole Greyscale thing so I decided to start with the Viet Minh as I considered them to be a tad easier to do without all the camo uniforms the Frenchies are sporting. 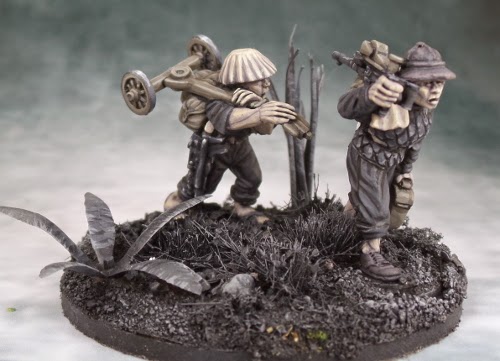 With this project in mind I had bought me the Scale75 "Black & White" paint set some month ago which proofed to be an invaluable help to me. 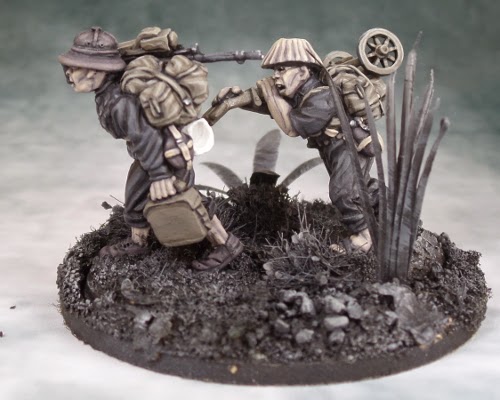 I started with priming the figures as well as the bases which were already given their tufts and fish tank plants. For the design of the bases I decided for an uninspired black-grey drybrushing approach as I did not want the base to draw too much attention from the figures. A thing that can happen quite easily in greyscale especially with something as flamboyant like a jungle. 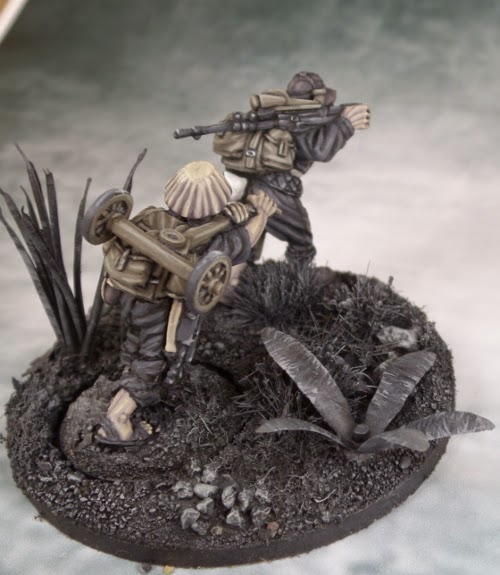 Then I did the figures and their equipment using different shades of brownish, greenish, blueish and well... plain greyish shades of grey. As I'm a pot painter and always will be, I had to make some compromises regarding the number of different shades as there's only a set number of shades you can pre-mix in empty paint bottles before it gets too expensive. 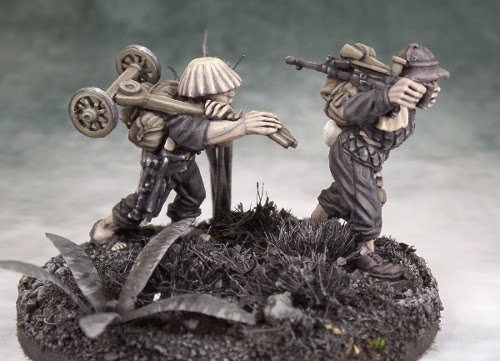 And here some (many) close ups of the single figures without their scenic bases: 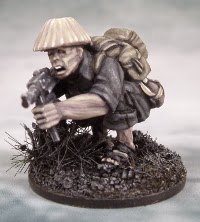 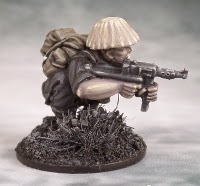 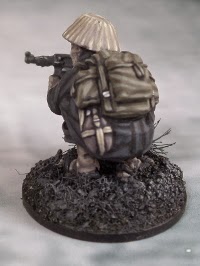 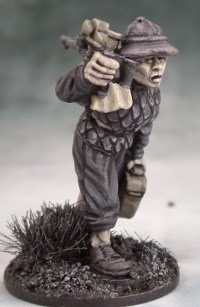 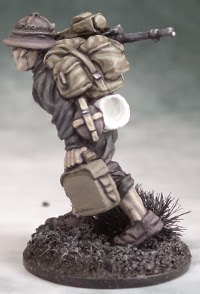 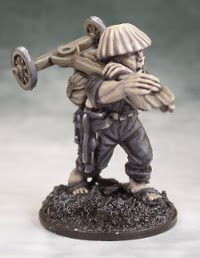 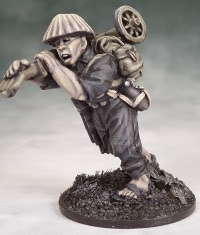 I really enjoyed doing these two teams and will hopefully get some more done during Curts upcoming "Fifth Annual Analogue Hobbies Painting Challenge" which will start on December 5th and last till March 20th. 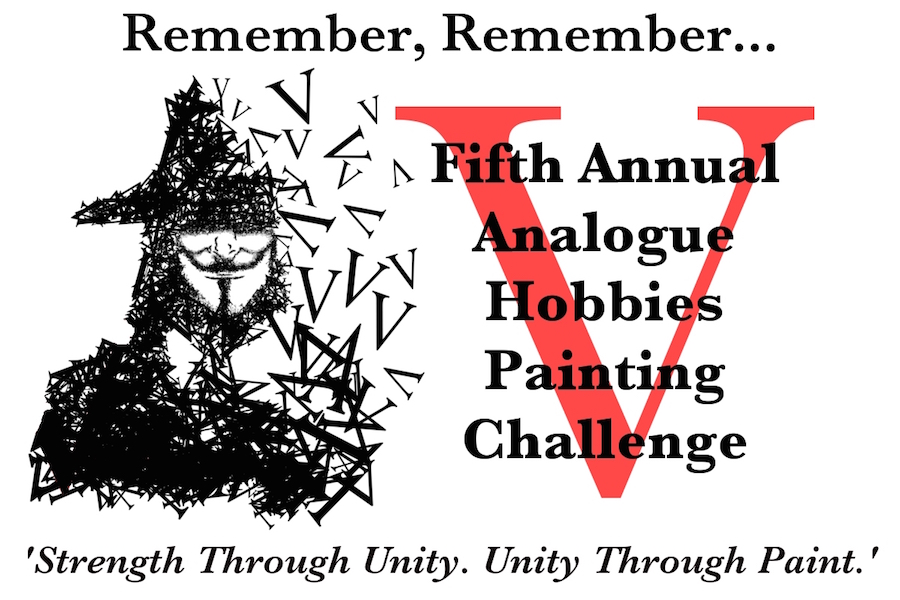 What a clever boy using the "V" (V for Vendetta... took me a while to get it) for the 5th challenge and staying in the spirit dedicating it to Anti-Heroes, Rogues and Ruffians. Must have hired some PR professionals this Mr. Campbell.

I'm taking part for the second time but opted for an even lower points goal than last year with only 400 points. I only reached the last years 500 pts. by taking part in all the various themed bonus rounds and therefore most of my tally at the end were bonus points. As I want to get a serious (well looking at my lead pile and comparing it with my usual painting speed "serious" seems to be somewhat of a SERIOUS over exaggeration) dent in my mountain of unpainted goodness I didn't want to add to much more goodness to it before the challenge. So I probably won't take part in all but a few of the themed rounds. But I've found a (I hope) fitting entry fee figure and am looking forward to get it painted.


So I hope you enjoyed this (for my means) rather long post and thanks for viewing!