On sunday Chris and I had another go at the TFL's Dux Britaniarum. As the last campaign was almost done (with the british beeing almost constantly beaten) and me having lost the character sheets of my Nobles during the summers renovation we decided to start a new one. To prevent me from loosing my stuff again I decided to keep track of my characters' developement and the general events of the campaign on a dedicated site on this blog.

The first game was to be a raid on a small british farmstead. We set up the table and I thought I was lucky when rolling for my entry point and coming out next to the farm. But as Chris rolled for how much head start he would have before my forces would arrive my luck ran out. He had three full movements with his Saxons before I was able to deploy my British.


As soon as my force was on the table I started  to make mistakes. I wanted my troops to form shieldwall as soon as possible as not to be caught unprepared by the Saxons. Unfortunately a shieldwall is a rather unwieldy formation so my troops soon got stuck instead of defending the bloody farm. 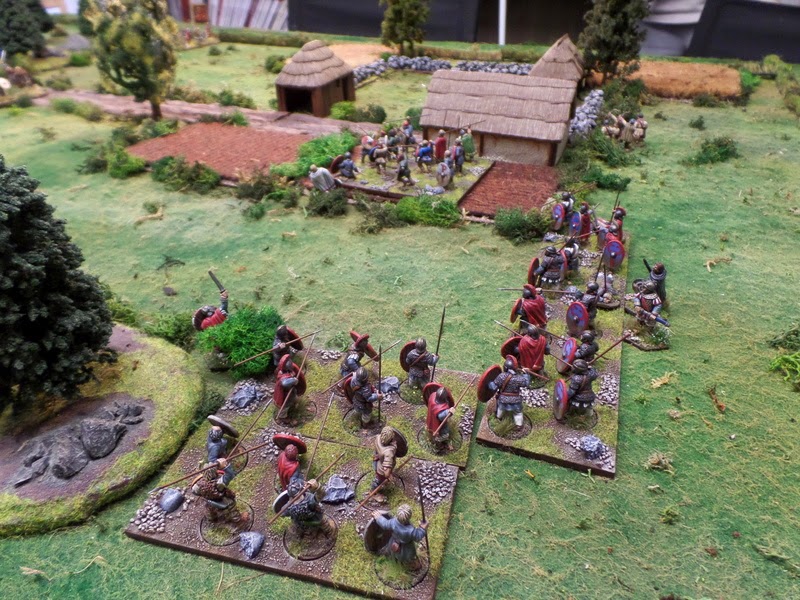 For some stupid reason I did not want my troops to enter the woods and thus reducing my movement. Instead my troops hindered themselves and my center and left wing ground to a premature halt. 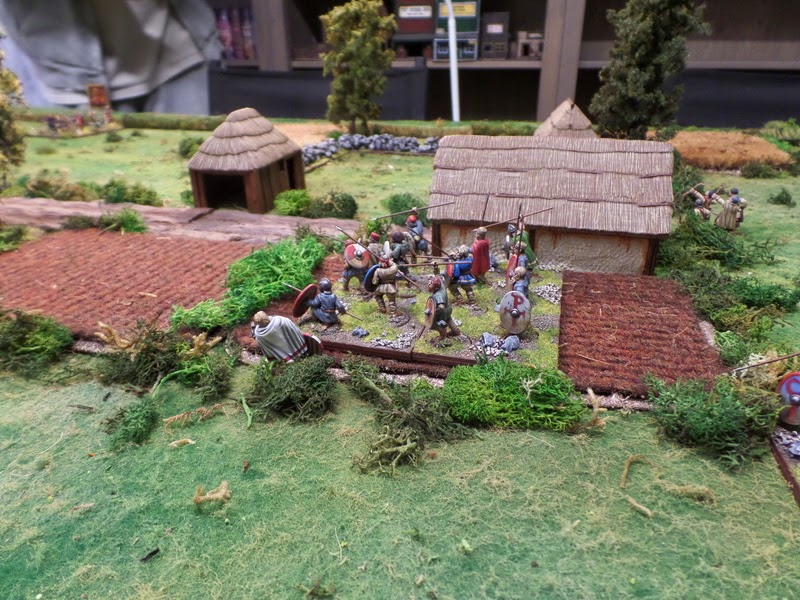 Only my right flank consisting entirely of levies was free to move and did so in a vain attempt to stop the Saxons from reaching the village. 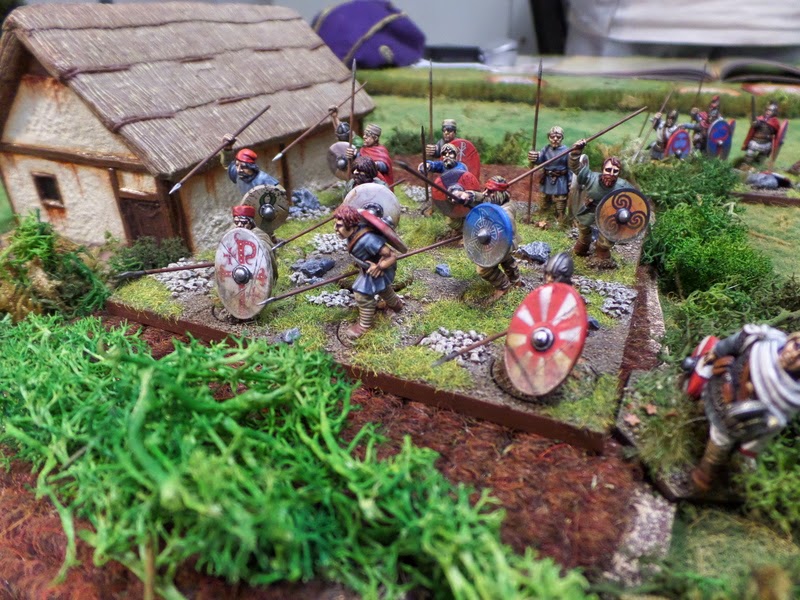 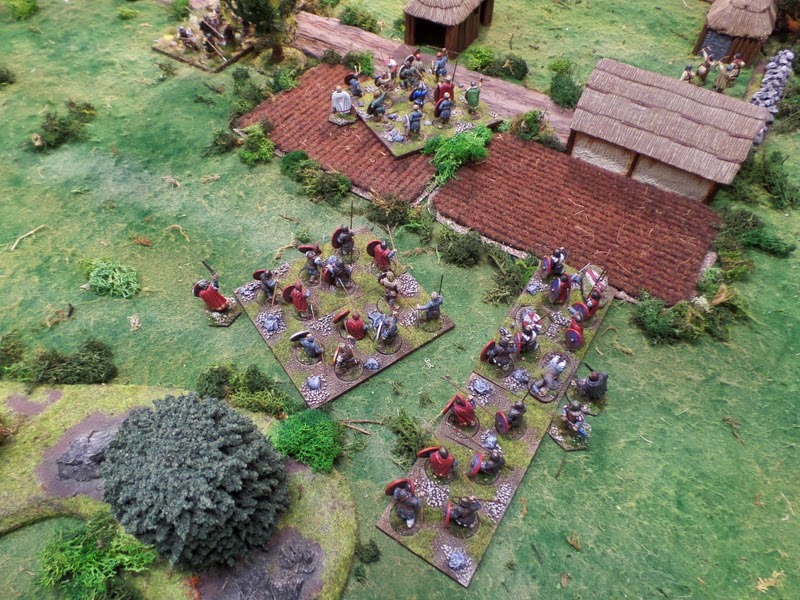 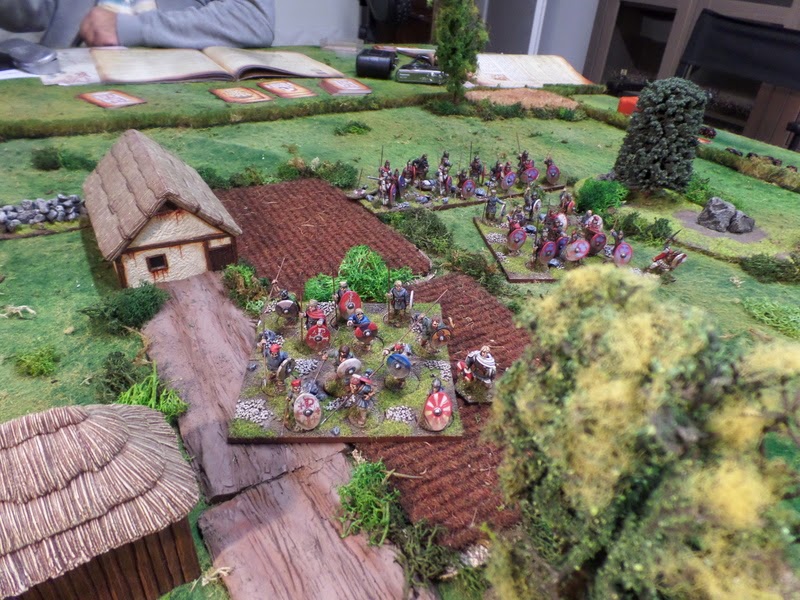 In view of the Saxons rushing towards the farm my levies formed shieldwall... 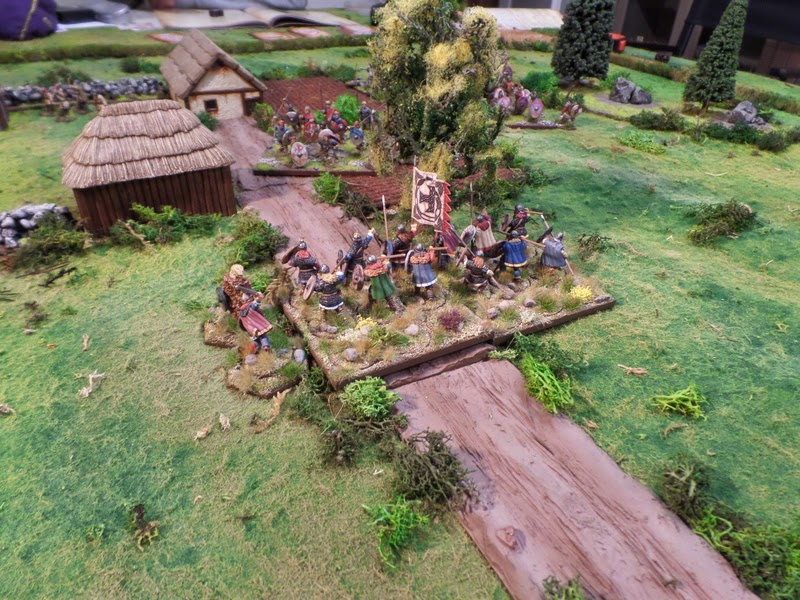 ...and the battle began in earnest. In the background you can see my archers firing on an other group of Saxons determined to cross the small walls that enclosed the farm. 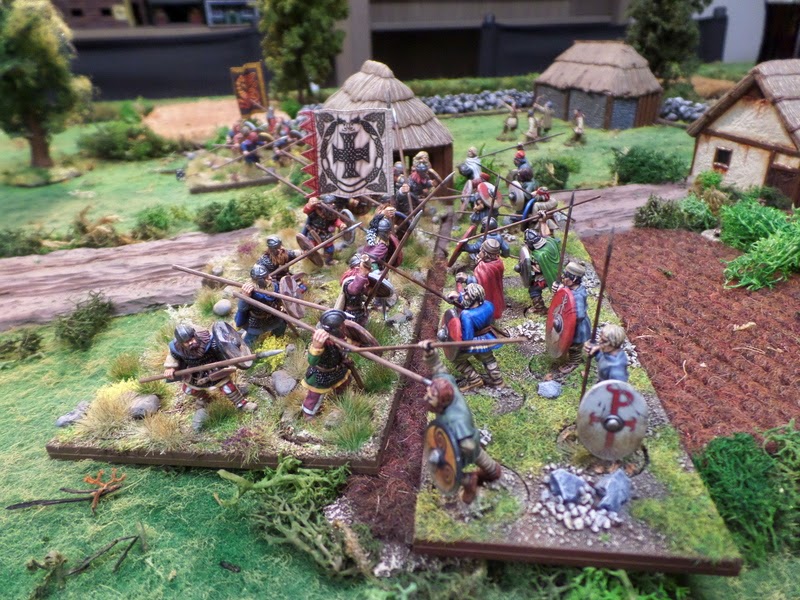 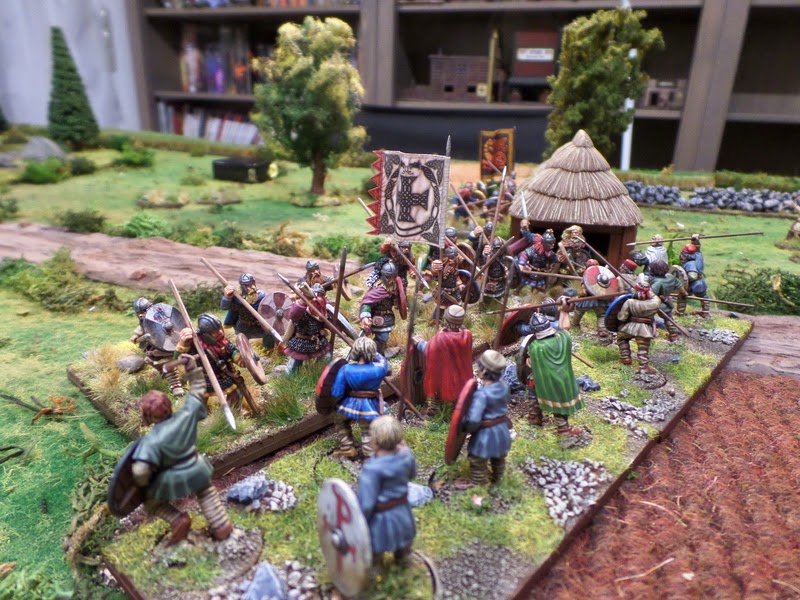 First blood was spilled (of course only british) and my levies decided to withdraw for the moment. Already five lives were lost. 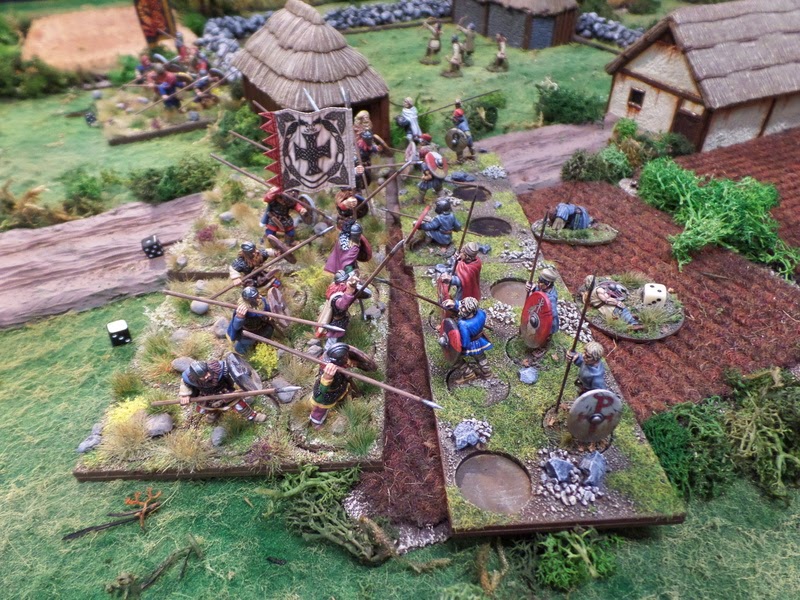 In the meantime the traffic jam which had caused great difficulties for my centre and left flank was finally dissolved and another group consisting of a group of warriors and levies each formed shieldwall in front of the beaten leavies. Unfortunately not my elite troops that were still standing in the back rows waiting for... well, I don't know. 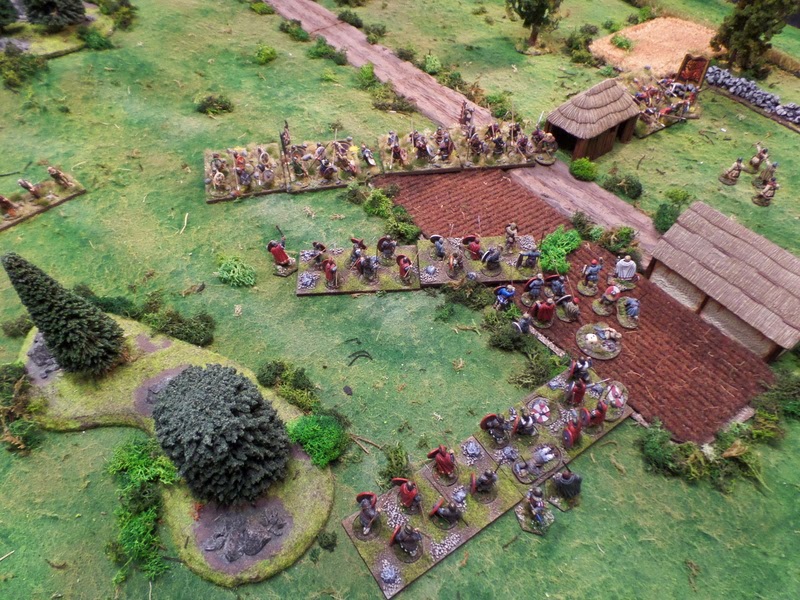 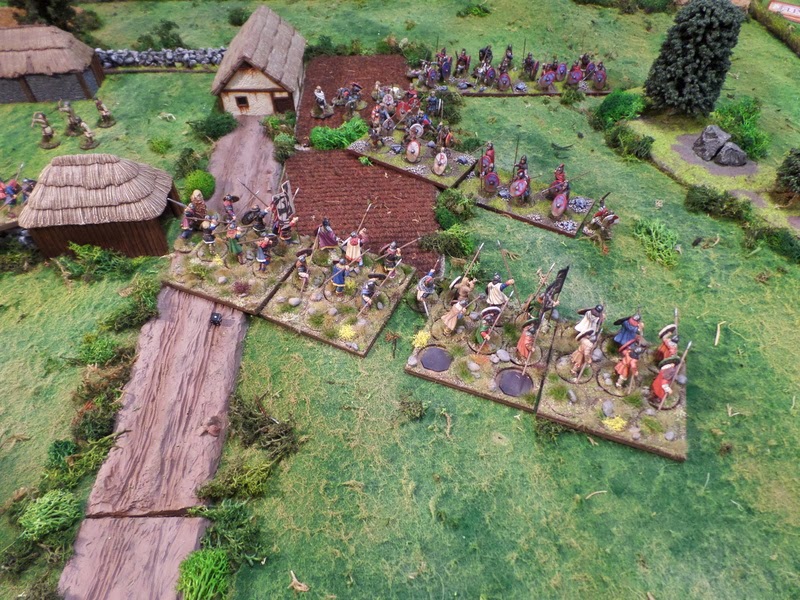 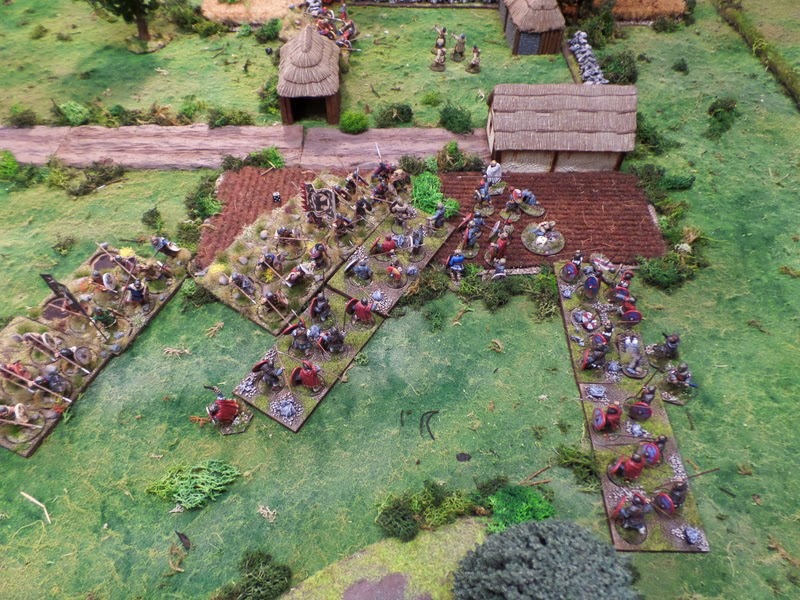 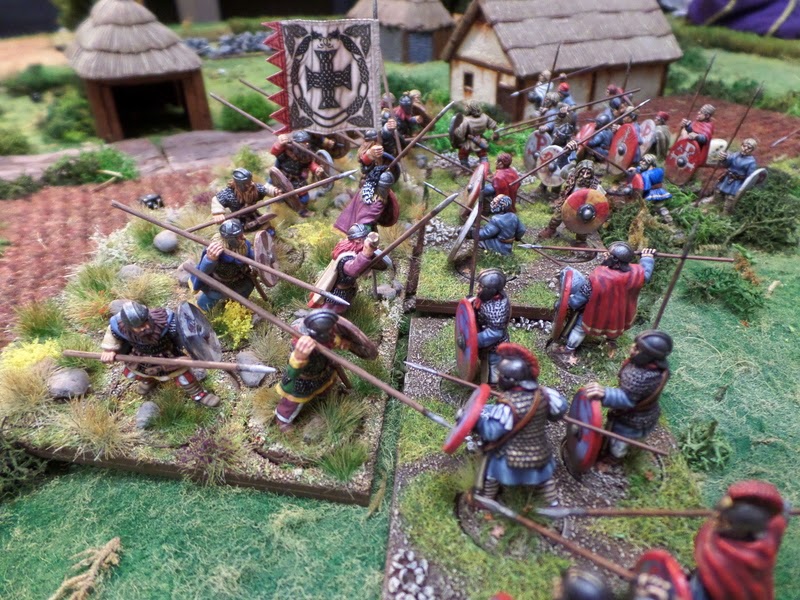 ... and despite killing three of the enemy my troops were accumulating shock. 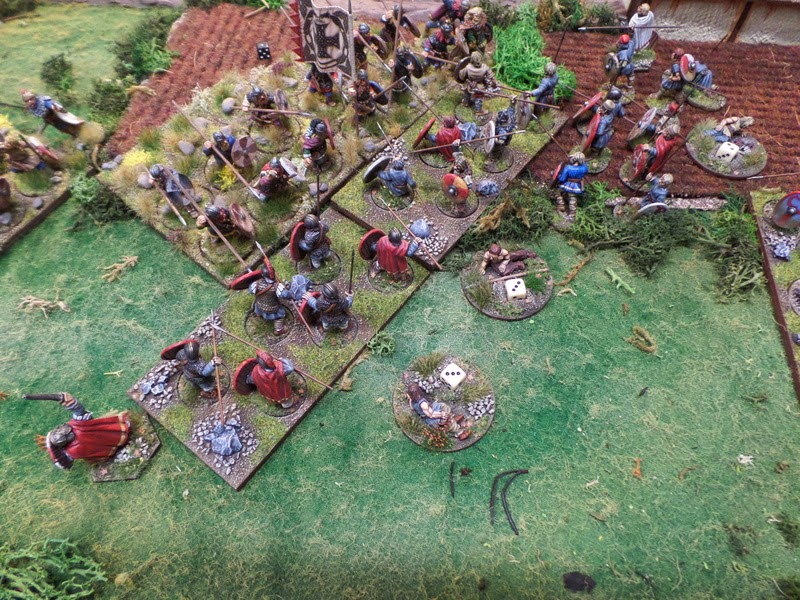 And this was when everything went wrong. Having scored 6 hits out of 10 dice I failed to cause kills as well as shock on the enemy. 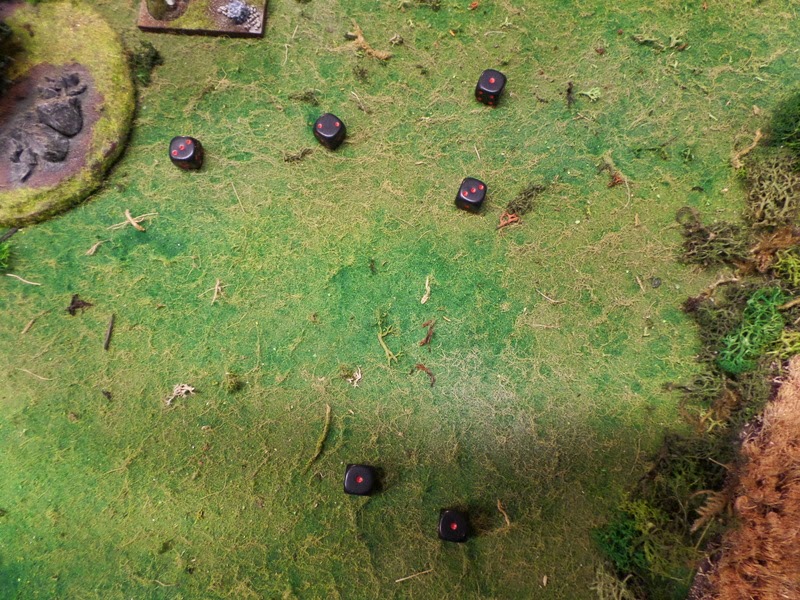 At this point I decided to try to save as much of my force as possible to fight another day. But as neither side had caused more damage on the other the melee went on... 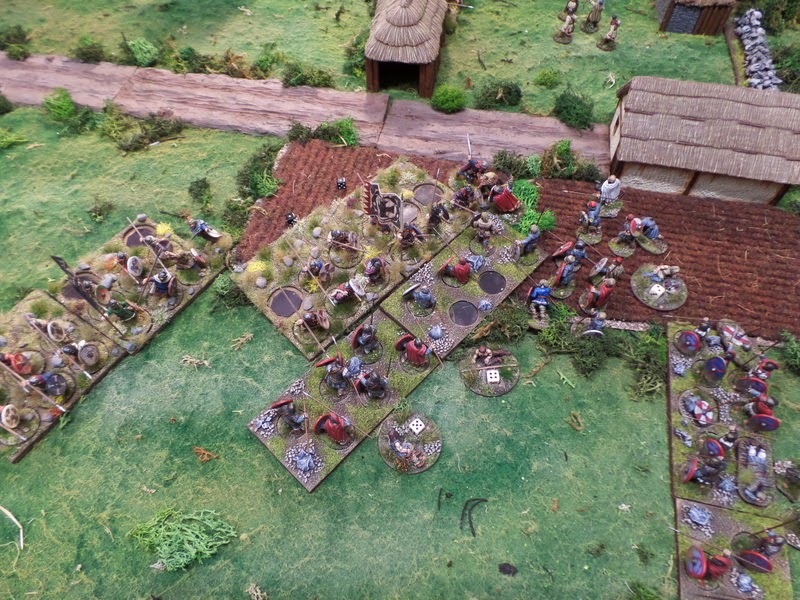 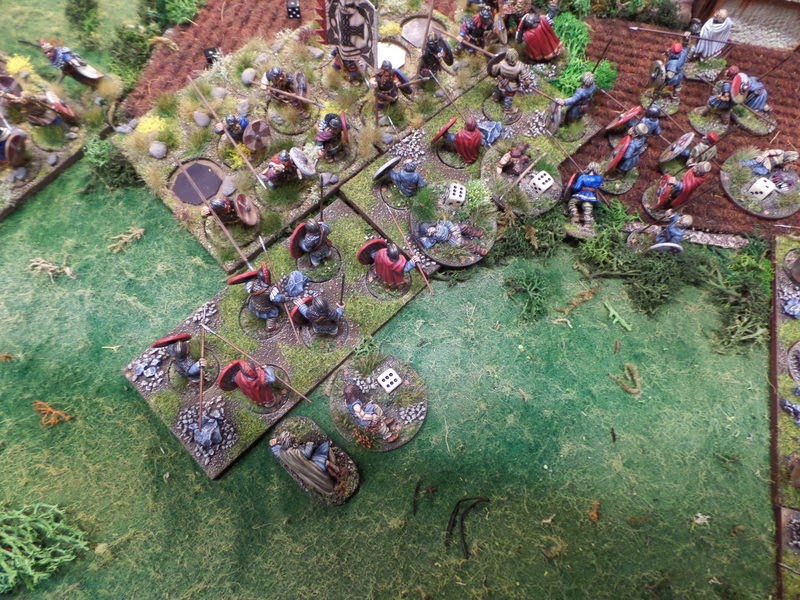 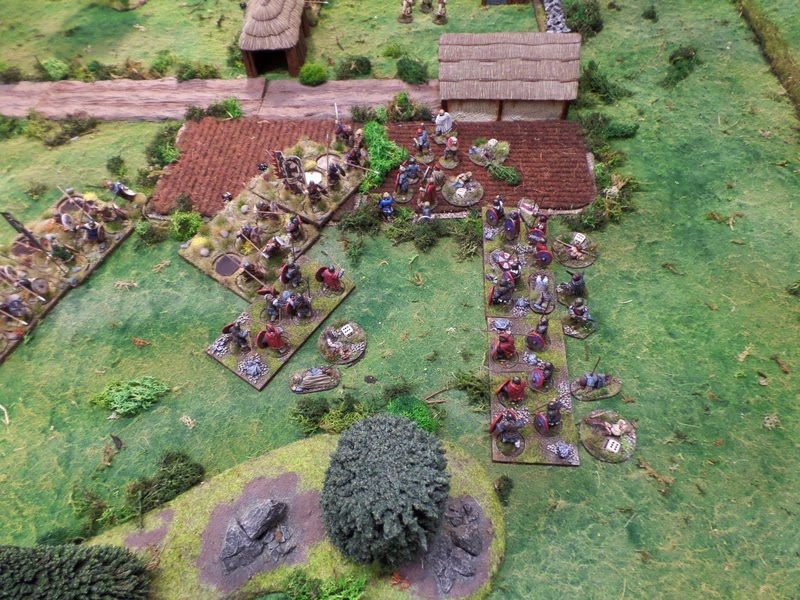 My broken units forced their way through my elite shieldwall and caused chaos inflicting shock. What was intended to be an orderly withdrawal became a mere rout.

Luckily my men were too fast to quit the battlefield so that the Saxons could deal them no further harm. 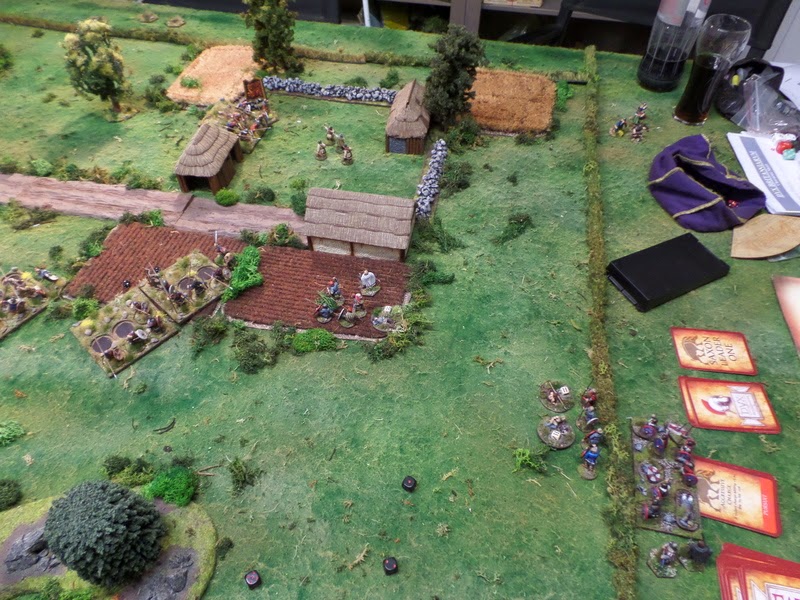 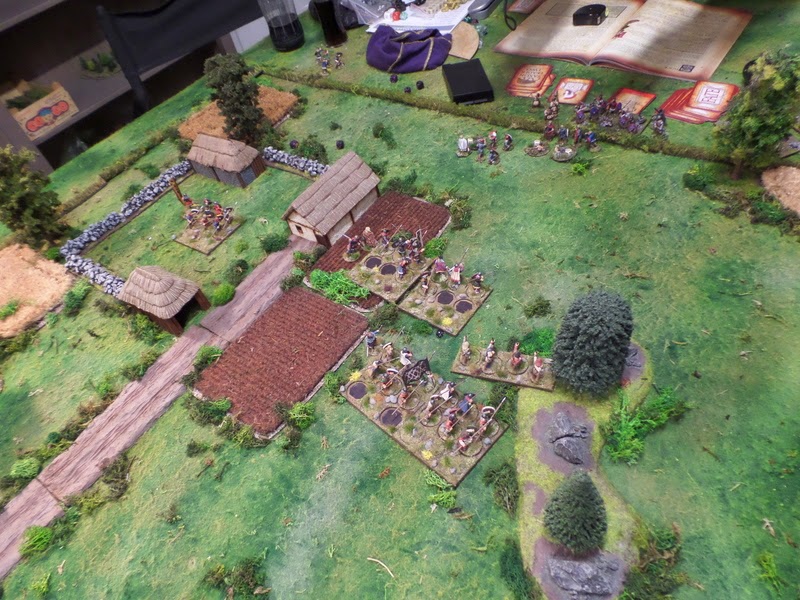 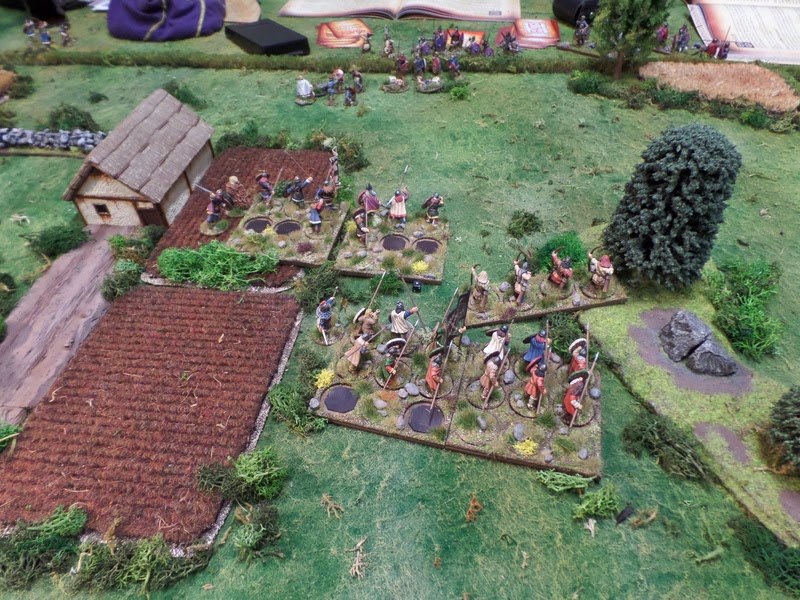 So the first battle of the new campaign started like the last of the old... I lost. No blame is to be given to the dice gods this time as I simply messed up things at the start when deploying my units.

Despite the my Waterloo we had a great day of gaming. As always the table alone would have been worth the time.

We had some serious rule issues while gaming so this prevented us from having a second game. While we really like the rules they unfortunately have some holes you can drive a MBT through. Sometimes it appeared to me as if the author  knew what he wanted to express but failed to properly explain to his readers...
To me Dux Brit is no pick up game as I really think one should know his opponent well enough in order to avoid endless discussions as to how a specific rule works but simply make a decision in the spirit of the game and crack on.