It's only a couple of days, well more like a couple of hours till the Annual Analogue Hobbies Painting Challenge is about to start. It's the 11th iteration of this bout of hobby madness and I'm pleased to report I've been... ahem... volunteered to act as a minion by our esteemed Snow-Overlord Curt.
After a somewhat challenging year I'm rather looking forward to indulge myself in the fun and banter the Painting Challenge provides aplenty year after year.
My hobby output was rather sparse throughout the year as I frankly didn't have the best of years, neither job wise nor privately. I'm pretty certain that most of you out there will have had similar experiences so instead of dwelling too much on what has been a f***er of a year, let us just look forward to a -hopefully- better 2021. 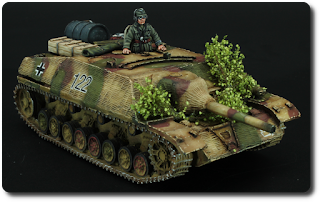 OK then... as we head towards the final days of the year I have one more item to add to my SS force for Operation Market Garden in the form of a Jagdpanzer IV. The model is by Warlord Games while the commander is a Perry Failcast from their Afrika Corps range. I found the casting (and sloppy sculpting) of the Perry miniature as appaling as ever, but the figure suited the mental image I had of how I wanted the commander to look perfectly. Thus I bit the bullet and actually he turned out rather well if I may say so myself. The plain tunic in Feldgrau rather than fancy camouflage contrasting nicely with his ride. 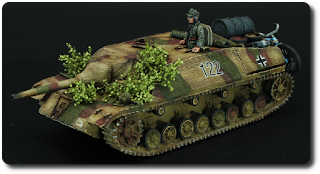 The Jagdpanzer itself is quite a hefty lump of resin but went together rather well, not withstanding some annoying warping of the left track. It's a nicely detailed kit and the Zimmerit made it a joy to paint. To make it look a little more lived-in I added a smattering of stowage taken mostly from the Rubicon German Stowage Set and a few bits and pieces like the 3D-printed bicycle on the bag. My colour joice for the latter probably is a little too flamboyant to be historically accurate, but I quite like it nonetheless. Btw. it's available *here* if you fancy one -or more- for yourself. 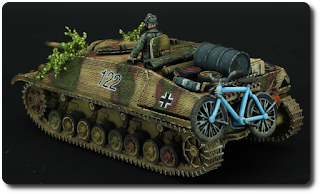 I only did some light weathering on this one as I felt it'd look too busy otherwise with all the other stuff and the Zimmerit. For the foliage I used "Tall Shrubbery" by Green Stuff World. I'm rather impressed by this product and while I only added what was supposed to look like just a few branches of foliage to the front of the Jagdpanzer, I will do further experiments with the stuff. I can always go back and add more after all. 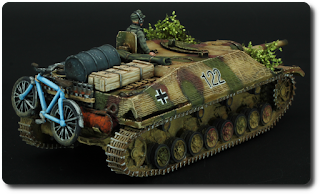 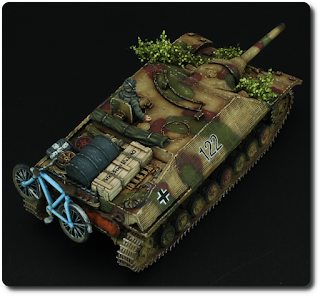 OK, that's been it for this year, as next time you'll read anything new on this blog will be after the challenge has started. And as I want this year to be over asap I've decided for myself to let my new year begin with the start of the challenge on Monday. Given that there'll, as of now, be no fireworks allowed in my part of Germany it shouldn't make much of a difference anyway.

Good luck, a Merry Christmas and A Happy New Year to all you fine folk out there! See you on the other side.