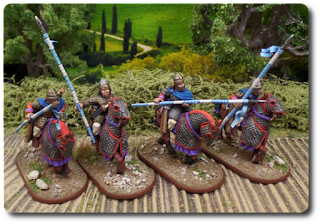 The Clibanarii are thought to have been the eastern Roman equivalent to the western Cataphractarii. Both were inspired by the heavy cavalrymen Rome encountered in her battles against the Parthians and later Sassanids. The word Clibanarius probably stems from the Persian word griwbanwar (neck-guard wearer).


Many scholars believe the Clibanarius was armed with a bow and a lance (contus) but no or only small shields. Other interpretations see the Clibanarius as part of composite units of horse archers (Equites Sagitarii) and heavy cavalry in an anti-cavalry role, while the Cataphractarius may have fought in an anti-infantry role. It has also been suggested that due to the hot climate in which the Clibanarii fought, the horses were only armoured on chest and head as seen on the relief above, but finds of three (almost) complete sets of horse armour show full armour. 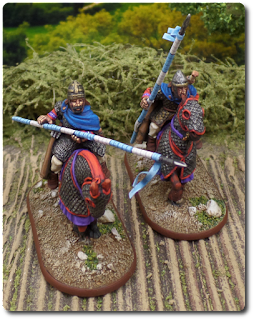 A contemporary description of the Cataphractarii, made by the Late Roman soldier and historian Ammianus Marcellinus, luckily has survived:

“...among these were scattered cavalry with cuirasses (cataphracti equites), whom they call clibanarii, masked, protected by coverings of iron breast-plates, and girdled with belts of iron, so that you would fancy them statues polished by the hand of Praxiteles, rather than men. And the light circular plates of iron which surrounded their bodies, and covered all their limbs, were so well fitted to all their motions, that in whatever direction they had occasion to move, the joints of their iron clothingadapted themselves equally to any position.” adapted themselves equally to any position.” 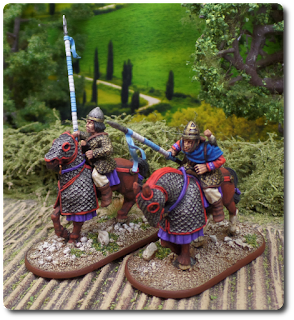 Modern reconstructions show the armour of horse and man amounted to a total of about 80 to 90kg.
But to this day it's not completely certain if the the terms Catapractarius and Clibanarius actually meant one and the same or if they were two different kettle of fish. So I chose to model my interpretation as armed with bow and contus while riding half armoured horses. 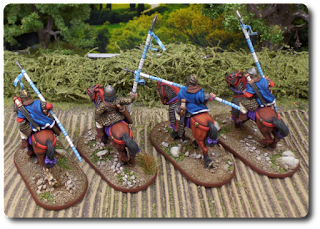 Figures are from Wargames Foundry and are actually meant to represent Sarmatian Cataphracts. They looked suitably oriental to me and thus were press ganged as Clibanarii into my Late Roman army for SAGA. The small pennons on their lances were made from metal foil. Also I tried to give them a more eastern appearance by going for a darker, middle eastern skin tone.