No, no Fallschirmjäger this time... yes, promised!
For various reasons, both private and job related, I didn't have much spare time lately. So progress on the Fallschirmjäger came to an abrupt halt. You know how this works: Finish line in sight you simply HAVE to switch to another project for fear of actually finishing a project, or at least as close to finishing as we wargamers will ever come with any given project. Instead I finally finished the basing for a White Russian command stand I had sitting around for quite a while now. 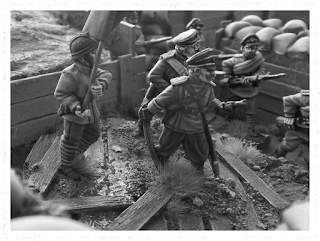 You might remember my first tentative steps into WW1/ RCW from many moons ago. Since then these have been lurking in their drawer, waiting to get some love. When I first started with this project I wanted to go exclusively WW1 but soon I realised these will probably never see the table anyway. Thus I went for the colours of the visually more interesting Kornilov Shock Regiment of the White Russian army during the Russian Civil War. 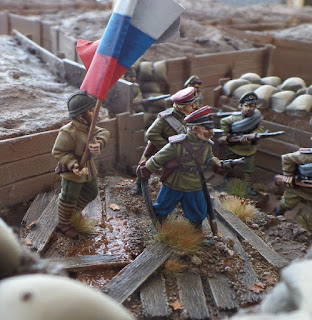 Miniatures are a  mix of Tsuba Miniatures Russians intended for the Russo-Japanese War and the nice Brigade Games  WW1 Russians. In my oppinion both ranges work quite well together size wise.
For a test I used Army Painter Quick Shade on these but instead of saving time I ended up investing yet more time into tidying up the mess it created. 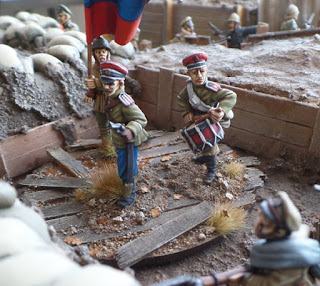 Uniforms and equipment changed noticeably in the years between 1904 (Russo-Japanese War) and the outbreak of the Great War.  And by the time of the Brest-Litovsk peace treaty between former Russia and Germany all front line as well as rear echelon units should have been issued the new uniforms.  Nonetheless as it's common Russian habit the old equipment was stockpiled and re-issued when in the following Civil War supplies became sparse, making it a very interesting period for any wargamer who likes to have an army in a hodgepodge of different uniforms and gear. 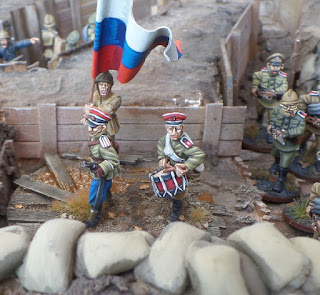 Not only were old uniforms used up but also there were a number of so called 'colourful' Regiments, of which the Kornilov Shock Regiment was probably the most well known known, where especially officers used to wear newly tailored uniforms in a kind of 'regimental colour'. For the Kornilov Regiment this was black trousers and gymnasterka (the russian version of a military tunic) piped white or yellow and a cap with black bands and red crowns. 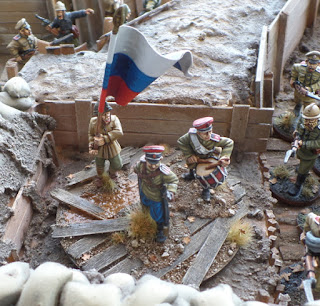 The Kornilov Shock Regiment was named after Lavr Kornilov, a former tsarist officer and one time supreme commander of the russian forces after the overthrow of the tsarist regime. Despite the obvious war-weariness of the Russian Army and the public in general he wanted to continue the war against Germany. A fierce anti-communist he fought against the Bolshiviki but was deposed by the provisional gouvernment under Kerenski. He refused to step back and tried to raise the population St. Petersburg into fighting both the Bolshiviki and the provisional gouvernment. The coup failed and Kornilov was interned. 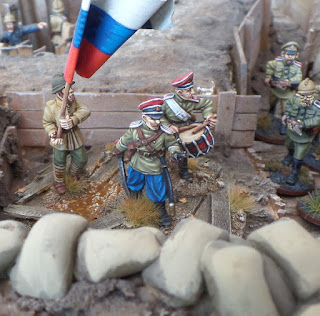 Following the October Revolution he was released and together with General Alekseyev he raised the Volunteer Army to fight the Reds. In April 1918 he was killed in his headquarters by a grenade.