Over the last few days I've been working away on some 20mm modern Bundeswehr figures by Elhiem and terrain for a middle eastern, or more probably Afghanistan, setting.
While most of the terrain is still far from presentable my first Fallschirmjägergruppe is ready for combat.

I've never been particularly interested in doing ANYTHING in 20mm. But it's even harder to find a nice, affordable and comprehensive range of modern Bundeswehr in 28mm out there than for a cock to produce eggs.

So in the end I decided to give 20mm a chance and placed an order with Elhiem. While not really cheap they offer a growing range of Bundeswhehr and KSK figures and truth be told the figures really are quite nice.


Still painting figures in this scale feels rather different to anything I've done so far.
While being only about a head smaller than say for example Foundry (which mostly are on the smaller side of 28mm figures) they certainly lack the heft and bulk of 'proper' wargaming figures.

With the likes of the Perry's or Fife & Drum producing 28mm figures that are significantly more anatomically correct than most other wargaming ranges I know there's a definite trend towards more realistically proportioned miniatures in the 28mm market too. I personally am not that fond of such developments but each to his (or her?) own I guess. 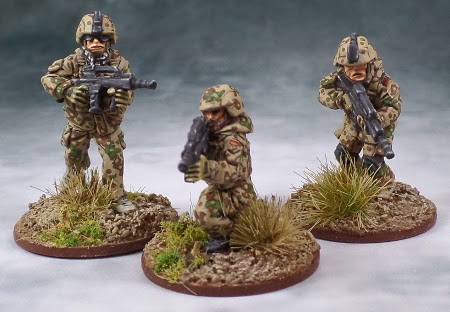 But enough of an old farts ramblings just let us get back to the figures at hand, shall we?
So if I expected to safe on time painting figures in a smaller scale than usual I was to be disapointed. While in 15mm there are certain short cuts one can take and still produce nice figures for the gaming table, in 20mm I felt I had to do all the steps I usually undertake in 28mm. So I ended up spending virtually the same amount of time per figure as normal.


The figures themselves are pretty nice and well detailed. The only thing I'm missing (yet) are UGL's for some of the G36's. It took me some time to figure out the 'correct' colours for their equipment as well as the desert Flecktarn camo. There was also little in the way of flash or mould lines so I could start painting right away.


While the Panzergrenadiere probably still are THE iconic image of German soldiers I decided to go with Fallschirmjäger for the time being. A Jägergruppe (be it Fallschirmjäger or Gebirgsjäger) in the Bundeswehr usually consists of two Trupps (Fire teams) and is commanded by a Gruppenführer who also takes command of the first Trupp. There are two MG4 Saw's per Gruppe but it's common practice to replace a MG4 with its relatively weak 5,56mm ammunition with a MG3 which is a direct descendant of the MG42 of WW2 origin. The remaining Jäger are armed with the G36 (two of them with UGL) which is the standard Assault Rifle of the Bundeswehr. Currently there's discussion about phasing out the G36 because there seem to be issues with its accuracy when in prolonged fire fights.
The Gruppe usually is transported by a Tpz. Fuchs (APC) or Dingo I or II. 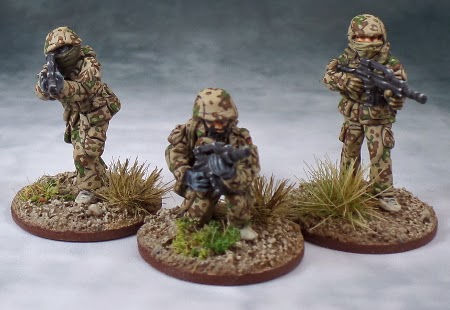 For ease of recognition both the NCO's were placed on octagonal bases and the MG3/ MG4 gunners on 20mm square bases while the ordinary Jäger are based on 20mm washers.
With the benefit of hindsight I should have gone for hexagonal bases for the NCO's as square and octagonal bases do look too similar. Therefore I gave the NCO's white gloves to make them stand out a bit more.

All in all I'm quite content with the results of this new project of mine and I hope you like 'em too.