Back to my Soviets again with one of the last support choices I need for the TooFatLardies campaign "Storming the Citadel", which pits the Großdeutschland Division against their Soviet counter parts during Operation Zitadelle, the famous battle in and around the Kursk salient in 1943.

As usual the miniatures are from AB Figures and painted up nicely. Except for the single female figure they're all wearing the Soviet two piece camouflage smock featuring the distinct Amoebae pattern camouflage scheme. The female figure rather unusually wears the earlier (and much rarer) one piece garment.

The Soviet Union was the only belligerent nation where women actively served in frontline units in any number. All in all there were about 800.000 women serving in the Red Army in different capacities, ranging from medics over snipers and AA-personell (I was quite surprised to read that the majority of AA-batteries in Stalingrad were crewed by women) to pilots, tankers and even scouts. 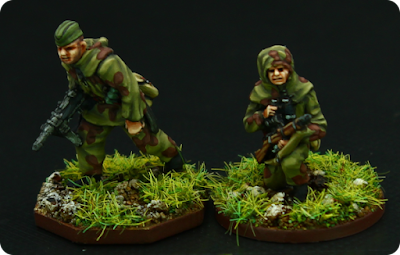